Many young men who’ve balanced books and hooks graduate college with the dream of someday reaching the Bassmaster Classic. Matt... 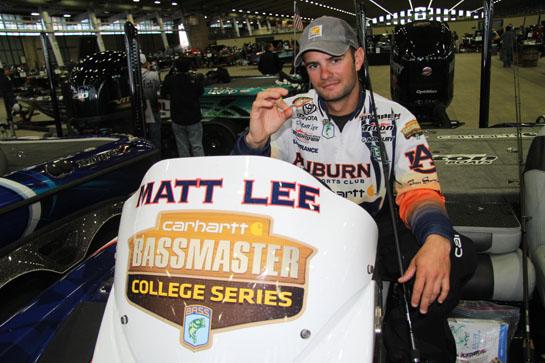 Many young men who’ve balanced books and hooks graduate college with the dream of someday reaching the Bassmaster Classic. Matt Lee, College B.A.S.S. champion, is no different, but he didn’t care to wait so he qualified for his first Classic with two semesters left at Auburn University.

At 24 years old, Lee is the youngest competitor in the Classic field — and only the second to qualify for a Classic through collegiate events. He said his collegiate fishing experience has given him a venue in which to hone his competitive skills, while sharpening his media savvy and developing sponsor relations with companies such as: Carhartt, Toyota, Mercury, Weigh-to-Win, Pradco and 13 Fishing.

After the Classic: “I’m going to go back and figure out which tests I’ve missed and try to study for those. I’ve already gotten several emails (from professors) about that.”

His tournament plan: Lee will fish the 2013 Bassmaster Central Open events and the College National Championship, for which he’s already qualified. He’s undecided on the when/if of a possible pro career, but it’s in his sights.

“I’m ready to give the Classic all I’ve got and then move on to the next events,” Lee said. “I want to give (a pro career) a shot. I’ll do everything in my power to make that happen.”