UK Angler Lands 1,320-Pound Marlin, One of Largest All Time

Talk about beginner’s luck! Kevin Gardner’s first blue marlin is one of the largest ever pulled from the sea, weighing... 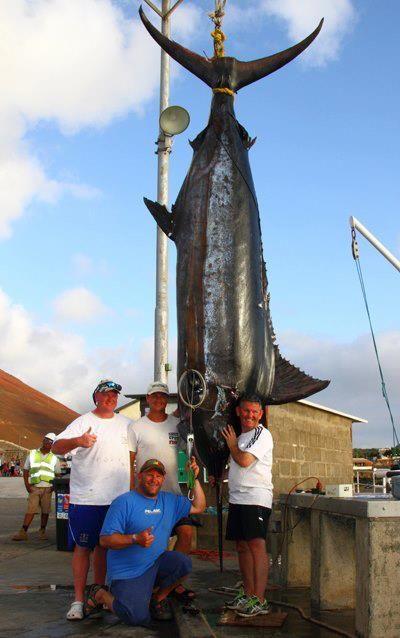 Kevin Gardner’s first blue marlin is one of the largest ever pulled from the sea, weighing an incredible 1,320 pounds.

The United Kingdom angler was trolling off Ascension Island in the South Atlantic Ocean on Monday afternoon when the leviathan hit. Harmattan skipper Olaf Grimkowski detailed the event later on his Facebook page. “In the distance, we saw her lunging and she looked promising,” Olaf wrote. “After three surface runs she went a bit deeper and for the last 90 minutes Kevin fought her [into the] sunset.” All told the fish fought for more than three hours before wireman Emil Ruud was able to bring the blue in close enough to gaff.

Kevin’s fish is the second largest blue marlin taken off Ascension Island, an area known for “granders” or 1,000-pound marlin. The largest, a 1,337-pounder, was caught back in 2002.

The IGFA all-tackle world record for Atlantic blue marlin is 1,402 pounds. That brute was caught off Brazil in February 1992.

Kevin’s fish measured 149 inches from the tip of the lower jaw to the inner fork of the tale and carried a girth of 83 inches. By all accounts, it was a welcome sight to all aboard the Harmattan.

“We had a pretty slow season until now when it comes to marlin fishing, but it seems to be true that when you have a long hard time, you are saving up for something special,” Olaf wrote. “Well, we had our special day today.”