Some things last longer than others. A gallon of milk may last a few weeks and a fashion trend a... 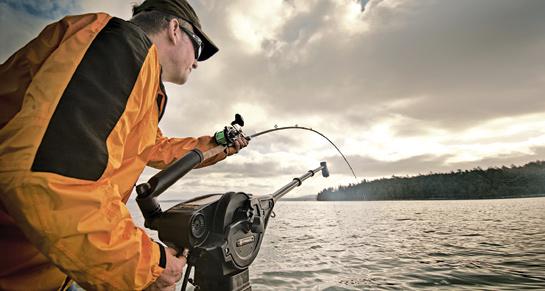 Some things last longer than others. A gallon of milk may last a few weeks and a fashion trend a few months. But the sportfishing industry has kept downriggers relevant for nearly 100 years. Advancements in technology and changing water conditions (an effect of the Zebra mussel invasion) have caused ‘riggers to take a back seat to other tactics, such as leadcore and copper line or drop weights. But now riggers are making a dramatic comeback–and not just in the Great Lakes.

They’re gaining fans in many parts of the country, especially among big-lake walleye fishermen in the Midwest who troll in order to cut the huge bodies of water they fish down to a more manageable size. Downriggers remain the best way to troll lures and other baits at specific depths and can give you a major tactical advantage over fish, whether they are hugging a thermocline or the bottom. And with just a couple of simple tweaks to your salmon or walleye big-water trolling setup, you can run lures right to their mouths.
**
1. Tone It Down**
Riggers can be stealthy, but oddly enough, it is a perceived lack of stealth that made many anglers quit using them. The steady hum of downrigger cables, which can either lull you to sleep on a hot summer’s day or make you want to rip your hair out, is one fish-spooking culprit that can be easily eliminated. Increasingly, anglers are replacing cable with 80- to 150-pound-test braid to carry the weights down. This gets rid of the hum and is much less visible to spooky fish.

2. Bounce the Ball
Large black torpedo-shaped weights are all the rage among anglers fishing riggers in these lakes with cleaner water. Their sleek shape means that they still stay nearly vertical in most circumstances.

3. Fish Their Living Room
To become the ultimate fish predator, you have to learn as much as you can about your quarry, including where it lives and its comfort zone. That’s where deploying a speed and temperature probe with your downrigger comes in. Models such as the Fish Hawk are especially popular on large bodies of water. The probe, attached just above the cannonball weight, allows you to check temperatures up and down the water column. When fish are hanging near a thermocline, for example, the probe will help you pinpoint the temperature at their depth and then you can put lures at precisely where the fish are congregating.

At the same time, these probes allow you to see what your speed is at the ball. Advanced skippers often refer to this as “set and drift” when plotting a course. Although you might think that your lure is always traveling at the same speed as the boat, current can affect its velocity. The speed at the surface and that at 30 feet down are often different. The probe attached to a rigger ball can instantly tell you if you need to speed up or slow down to achieve your desired lure speed. Even more important, it will allow you to run your lures at the same speed no matter what direction you troll in. This is especially helpful when you turn around to go back over the water you were just trolling in.

4. Bet on the Bottom
When you think of bodies of water that call for finesse tactics, Lake of the Woods in northern Minnesota probably tops the list. For years, walleye anglers have fished this giant lake with every type of live bait rig, jig, or slip bobber under the sun. However, in the last few years, trolling has steadily gained in popularity, particularly for targeting fish near the bottom. Trolling allows anglers to cover dozens of miles in a day instead of drifting and jigging a few hundred yards, and it also takes wind direction and speed out of the fishing equation.

Longlining crankbaits, trolling with leadcore line, and employing bottom bouncers are popular tactics, but the best is to control-fish the bottom with downriggers. This allows you to troll a shallow stickbait or spinner rig, for example, with very little line out and no worry of hanging up. With riggers, you have the ability to raise and lower all of your lures to within a few feet of the bottom quickly by just reading your depthfinder and making adjustments. It’s just more efficient when you have bottom-oriented fish.