Loss of a Legend: Doug Hannon, ‘The Bass Professor,’ Dies at 66 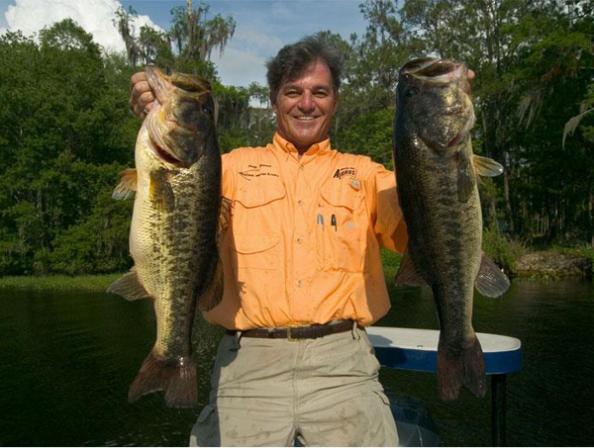 It was Doug’s future wife Lynn who fired Hannon’s career in the world of bass when she took her beau–then a psychology major at Tulane University, New Orleans–fishing on her family’s Texas ranch.

Hannon gained prominence as a guide in the ’70s fishing central Florida’s small natural lakes and rivers in camouflaged jon boats while wearing his signature wide-brimmed camo hat. He studied his quarry obsessively and from those observations originated an ever-widening arsenal of methods that would lead not only to his incredible catches (he recorded more than 800, 10-pound plus largemouths), but to revolutionary concepts and sometimes outlandish lures and systems he would build and sell.

There was seemingly no subject that failed to intrigue him from metallurgy to optics, firearms to astronomy. Whatever fascinated him at the moment was scrutinized and inevitably resulted in some tweak of improvement that likely found its way back to bass fishing. Hannon developed the first effective weedless electric trolling motor propeller. He dabbled in hook design and reel drag improvements. His WaveSpin spinning reels with “toothed” spool lips reduced or eliminated the slack loops that caused frustrating line fluff-offs. Most recently he developed the MicroWave guide system designed to reduce distance-robbing line helixes.

Though his career was built on bass fishing, Doug loved all angling and was a passionate tarpon fly fisher, hunting the largest of those silver brutes he could find in the Tampa Bay area. Many of his ideas and findings were covered over the years in Outdoor Life by this writer. Hannon was also tapped by OL as one of the 25 people “whose lifetime achievement has had the greatest positive influence on hunting and fishing.”

Doug was a soft spoken man with a mischievous sense of humor. Through it all, whether at shows, lectures, on or just off the water he remained always approachable to other fishermen with questions, or those just wanting to say they’d chatted with The Professor. He was a warm, interesting and irreplaceable personality who will be greatly missed.