It’s the ultimate evolution of angling ambition. First, we aspire simply to fish, then to catch a fish. Next, we... 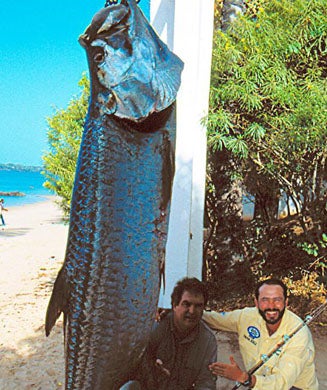 It’s the ultimate evolution of angling ambition. First, we aspire simply to fish, then to catch a fish. Next, we aim for our personal best. Before you know it, we’re eyeballing state record fish and finally… world record fish. The most competitive anglers in the world are chasing after angling immortality. But all fishing records are not created equal. Some records, near-records, and old records are almost too amazing to be believed – almost.

These 11 fishermen (and women) caught life-changing fish, and here are the legendary stories behind them.

1) Striped Bass: The King of All Records

Why it’s Special: The striped bass cult is perhaps one of the most passionate in all of salt water fishing. The striper record could very well be the most coveted of all time. Hundreds of thousands of dollars in prizes and award money has been offered for the world-record striper. When McReynolds broke the world record in 1982, he was forced into almost Bill-Buckner-style seclusion by the pressure, speculation and rampant rumor spreading. Myerson’s fish came with no less fanfare. I remember covering the catch the day it was caught. Rumors were flying from the second the news leaked. Accusations of foul play swirled around with stories of deception. In the end, Myerson, a respected and talented striper fisherman who plies the waters of Long Island Sound near his home in Connecticut, would rightfully claim the largest striped bass ever caught on rod and reel. Myerson was drifting an eel around a favorite boulder that was submerged in about 55 feet of water, according to local magazine OnTheWater.com.

Why it’s Special: Catching a ten-pound-plus largemouth bass once in a lifetime is an amazing accomplishment. Catching a double-digit bass under the pressure of a professional tournament, competing against the best anglers in the world is something else entirely. In 2006, bass pro Preston Clark set a record for a bass caught in a Bassmaster Classic when he landed an 11-pound, 10-ounce largemouth from Florida’s Lake Tohopekaliga in late February. His bag wouldn’t ultimately win the tournament, those honors would go to Luke Clausen, but his fish no doubt was the most memorable.

Why It’s Special: Hitting .400 in baseball will put you in the same conversation with greats like Ted Williams, and nobody’s holding their breath for it to happen again. Catching a 400-pound yellowfin will put you with equally exclusive company, but in the past decade, it has happened more than you might think. When Mike Livingston broke the world record less than two years prior to Yocum’s catch, it had withstood 33 years of yellowfin fanaticism. Now, less than two years later, the record has fallen once again.

The magical 400-pound-club for West Coast tuna fishermen is an elite one, and Yocum has become the foremost member. Most amazingly, Yocum battled and subdued the beast in only 50 minutes. The hardest-fighting fish pound-for-pound is an endless debate, but a strong case can be made for the yellowfin. Battling a 427-pound tuna must be excruciating. As if the record weren’t enough, Yocum could possibly win $1 million in prizes from Mustad for using a Mustad hook on the catch. The hook company has offered the reward to anglers who break world records for a set number of species.

4) Largemouth Bass: A Record from Around the World

Why It’s Special: With bass fanatics in places like Texas, Southern California and Florida building largemouth cults, the news from overseas of a record fish came as an especially big shock. The largemouth record is sacred for several reasons. First, it’s the species many of us grew up chasing, and there are few American anglers that don’t have a special place in their hearts for largemouth bass. Secondly, they’re omnipresent; whether you’re fishing in Montana, California, or Alabama, there’s a largemouth lake nearby. Lastly, the current record had stood for 77 years, helping it achieve almost mythical status.

Despite diehards buying $100 swimbaits in California and Texas and anglers risking their lives in a drug war with Mexico to chase huge bass, the magical number 22 had not been broken until Kurita came along. In classic, timeless fashion, Kurita lured the lunker with a live bluegill, something we can see Perry doing, even a century later.

5) Blue Marlin: The Record That Wasn’t

Angler: Gary Merriman
Where: Kona, Hawaii
Weight: 1,649 Pounds
When: 1984
**
Why It’s Interesting:** When Merriman caught the massive marlin out of Hawaii in 1984, it walloped the current world record by more than 270 pounds, but that’s not the unbelievable part. Merriman, an Atlanta tackle shop owner, was visiting Hawaii as a guest of then Atlanta Falcons owner Rankin Smith who was there for NFL meetings, but it gets even better. The fish made the front page of nine papers around the world at the time it was caught.

The bittersweet end to Merriman’s story is that, because the fish was caught using a line and leader that was longer than IGFA rules allowed for, it was not deemed the “official record.” The marlin, still the second largest every caught on rod and reel in the world, would be “unofficial,” despite Merriman’s amazing catch. A replica resides at Merriman’s Fish Hawk Tackle Shop in Atlanta. To see the specimen in person is the only way to appreciate it. (Fishhawk.com)

Why It’s Interesting: This fish is literally “too big,” to be a record. The International Committee of the Modern Day Muskellunge World Record Program, after careful examination, determine that this fish, long thought to be the largest muskie ever landed, was too big to be true. Scientific evidence led the team to suspect foul play, and they determined that “Muskies can’t get bigger than 68 pounds,” and so they disqualified the record. They then determined the next muskie weighing more than 60 pounds would claim the new “official title.”

They got impatient, and awarded Joseph Seeberger the official title when he landed this 58-pound muskie in Michigan in October of 2012. But still it’s hard not to wonder … was Spray’s fish for real?

Why it’s Interesting: Walter Maxwell shattered the tiger shark record in 1964, fishing off the coast of South Carolina. At the time, and for 40 years thereafter, the catch was considered one of the great feats in angling and no one thought it would fall. Forty years later, it did. The most amazing things about Clapson’s record are the history behind it and the future for it. Breaking Maxwell’s record was long thought impossible, but breaking Clapson’s might actually be impossible.

Tiger sharks are receiving more protection now around the world than they have in the past century and Clapson might be the last man to legally kill and weigh a record-breaking tiger. Clapson was drifting with an 80-wide when he hooked the beast.

Why it’s Interesting: No matter your favorite species, you never forget your first tarpon. The magic of the fight, the aerial acrobatics and the dread that you’ll do everything right and the magnificent creature will still throw your hook. My first tarpon was just shy of ten pounds; Max Domecq’s was 276 pounds heavier. His first tarpon ever set a world record that has stood for a decade. Lure manufacturer Patrick Sebile was the guide that put Domecq on the enormous fish. It wasn’t a Sebile lure that the tarpon ate, though, but a live a mullet.

The kicker? Rumor has it, Sebile, the guide, didn’t receive a tip. What’s a gotta do?

Why it’s Interesting: In the end, it wasn’t anything amazing or odd that disqualified Oswald’s enormous summer flounder as a potential world record. She did take the fish home after weighing it and stick it in the freezer. There, somehow, a wild animal ravaged it before IGFA officials could examine it. But, the highly coveted fluke record remained unbroken because, in the end, Oswald was honest. She admitted she’d rested the rod on the rail of the boat while fighting the fish off New Jersey’s Shrewsbury Rocks. That small detail made her record “unofficial,” as she broke IGFA rules. Would you be that honest with a potential record fish?

Why it’s Interesting: Hayes’s smallmouth might be one of the most controversial records of all time. If there’s one fish that can rival the largemouth bass in popularity, especially up north. From the Great Lakes to the Great Northwest, they are beloved for their ferocious fight. So we can only imagine how hard a double-digit bronzeback like the one Hayes caught while vacationing with his family in Tennessee would have battled. Hayes’s catch was certified as a world record until allegations surfaced in 1996 that the fish had been in fact stuffed with sinkers to break the record. Hayes was stripped of his honor. A decade later, lacking sufficient evidence that any false claims were made, the IGFA restored Hayes to his former glory. He holds the record once again. He was trolling a pearl Bomber behind his boat when the brick of a fish hit.

Why it’s Interesting: Nick Anderson gave his father the best Father’s Day present he could ask for, the catfish trip of a lifetime. The Anderson’s are no strangers to big blue cats, routinely catching fish close to 100 pounds. But this fish was one for the ages. Besting the previous world record by more than 13 pounds, this blue cat set the catfishing world on fire. Buggs Island, Virginia is notorious for monster catfish, and has produced previous blue catfish to 109 pounds.