It wasn’t the prettiest of days, but despite the dreary conditions, Tim Schneider, of Silver Lake, Wisconsin found the proverbial... 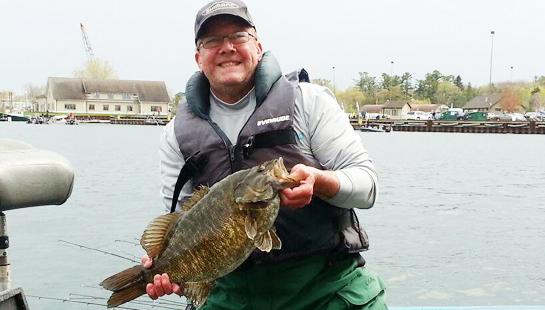 It wasn’t the prettiest of days, but despite the dreary conditions, Tim Schneider, of Silver Lake, Wisconsin found the proverbial pot of gold at the rainbow’s end. Actually, it was more of a brownish color – over 8 pounds of it.

Fishing the annual Sturgeon Bay Open Bass Tournament on Lake Michigan, May 17-19, Schneider caught an 8.45-pound smallmouth bass. Schneider said he caught the big bronzeback on a 3 ½-inch tube with 1/4-ounce leadhead. He was fishing over rocks in about four feet of water.

The spot, he said, was a traditional prespawn staging area for smallies that would soon move up shallow to bed. Location was certainly important, but Schneider said the weather also worked in his favor.

“It was overcast with light rain,” he recalled. “I’ve read that some people like (sunny conditions), but I don’t mind the overcast conditions. Anytime you have a low-pressure system, which is what we had, it gets them going good.”

Schneider’s big fish was the largest weighed in the tournament’s history. He and his tournament partner Greg Dickson caught about a dozen smallies during the tournament, with the biggest biting at 10:30 a.m. Victory eluded the anglers this time around, but they won the 2012 tournament, along with the spring 2005 event.

The smallmouth world record stands at 11 pounds, 15 pounds and was caught by David Lee Hayes in 1955.