Why I Hate Jelly Balls

There aren’t too many things capable of grossing out a 12-year-old kid on summer vacation. I wouldn’t count these among... 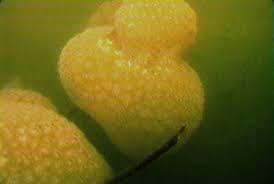 There aren’t too many things capable of grossing out a 12-year-old kid on summer vacation. I wouldn’t count these among my proudest moments, but I can vividly recall doing such things as: running over a bloated day-old roadkilled cottontail with my bike with disgustingly predictable results; performing more stomach-content analyses on largemouth bass than most fisheries biologists would care to (by the way, they mostly eat bluegills and can carry eggs the entire summer) and putting down a giant rain frog (the thing had to weigh 5 pounds) with a sledge hammer in order to protect the lives of my cousins. But then there were the giant jelly sacks from hell! On the revolting scale, they rated a 15.

If you’ve never seen them nor had the displeasure of stepping on one with bare feet, allow me a few descriptive words on these disgusting creatures that long ago actually prompted a mid-summer trip to the library (imagine that?).

Resembling some sort of gelatinous alien being, jelly balls range in size from golf balls to basketballs and are typically attached to sticks or rocks in freshwater lakes. Although they are typically mistaken for frog eggs, the jelly sacks are actually a primitive colonial invertebrate called bryozoa. Completely harmless–but totally gross–bryozoans are filter feeders and use retractable tentacles to sieve food particles from the water.

According to the New Hampshire Department of Environmental Services: “A bryozoan has an outer layer that protects a digestive tract. Bryozoans are filter feeders that eat phytoplankton (algae) and detritus (organic matter from dead plants and animals). The mouth has a crown of tentacles, which direct food to the mouth. A large colony can filter a significant amount of water in a day. This can be very good for a lake with too much algal growth.”

Sounds wonderful. As for me, I couldn’t reach for the anti-bacterial soap fast enough last weekend after my latest run-in with jelly balls. I guess that’s one way to feel like a 12-year-old kid again.