Fugitives and various other bad guys dread the sound of a K-9 unit in hot pursuit. Now, the Minnesota Department... 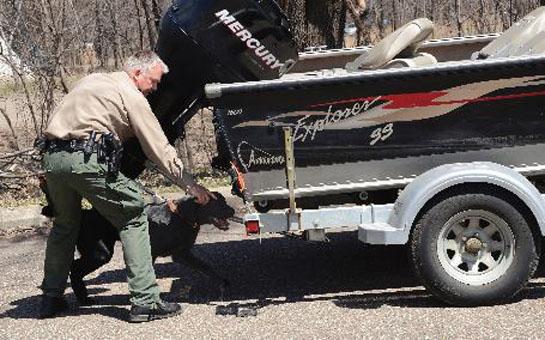 Fugitives and various other bad guys dread the sound of a K-9 unit in hot pursuit. Now, the Minnesota Department of Natural Resources adds zebra mussels to the list of miscreants to be targeted by those skilled noses.

In its ongoing battle against aquatic invasive species (AIS), Minnesota has become the second state (following California) to use trained dogs to sniff out zebra mussels during the open water season. Earlier this year, conservation officers Todd Kanieski and Travis Muyres traveled to California to learn about the country’s first program successfully utilizing mussel trained K-9’s to prevent the spread of AIS.

“A K-9 can find a mussel on a boat much faster than a human inspector,” said Kanieski.
Although the DNR has used dogs in resource protection roles since, 1995, 2013 sees the agency’s first use of mussel-detection training. Muyres, an experienced K-9 handler and certified K-9 unit trainer, spent five weeks training three dogs to inspect watercraft for the fingernail-size zebra mussels that can cling to boats and hide in bilges and livewells. Later, these K-9s will also be trained in tracking, evidence recovery, firearms detection, and wildlife detection.

“It’s very difficult to find a qualified prospective detector dog, but each of the dogs selected from the shelter was healthy, sociable and had a strong search drive,” said Muyres. “That search drive will prove to be invaluable in detecting AIS.”

Kanieski adds: “Combining mussel detecting with these additional skills will add muscle to the DNR’s capabilities and efficiency in protecting the state’s natural resources.”