There are fish that will test the resolve of even the most conservation-minded anglers. Florida saltwater guide Justin Moore has... 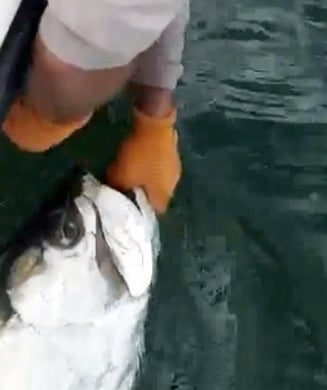 There are fish that will test the resolve of even the most conservation-minded anglers. Florida saltwater guide Justin Moore has the story of such a fish. Moore, 33, (pictured here) who guides out of Anna Maria, Florida, led four clients to what may have been the largest tarpon ever caught with a rod and reel on June 24, 2013.

The fish was estimated to weigh between 310 and 340 pounds, which would have shattered the current world record, a 286-pound fish caught in Africa in 2003, and the Florida state record of 243 pounds set in 1975.

The tarpon’s length and girth measurements were taken using a rod and string. The fish was released, and its true measurements remain unknown. The fish would not have qualified for consideration as a world record under IGFA guidelines because it was not measured using official measuring tools and more than one angler handled the rod during the fight.

Moore and his clients had a spectacular day of fishing prior to hooking the massive tarpon. They landed several fish in the 100- to 150-pound range like the one this photo above. That’s a tiring day of fishing for even the most enthusiastic anglers. Moore said they were getting ready to leave when Jan Toubl, aka the “Birdman,” felt the the take and decided to fight one last fish. Toubl, who is famous for the pheasant jerky he makes in Idaho, was fishing a threadfin herring on a 7/0 circle hook with 65-pound-test PowerPro line on a 9-foot spinning rod.

“The fish peeled off about 100 yards of line and then did a sideways roll,” said Moore. “Big fish have a hard time getting out of the water.”

Half an hour into the fight, Moore sensed there was something different about this tarpon. By that time, another client, Drew Denick, was on the rod. “Drew,” Moore told him, “This is a damn big fish.”

“The fish had a ridiculous back and was long,” he said. “I had the drag hammered down, and every time I see this fish, it gets bigger.”

An hour and 40 minutes into the fight, all four clients aboard Moore’s 23-foot boat had taken turns battling the tarpon. By the time the enormous fish came boatside, their arms were limp and their cell phones were dead from taking pictures earlier in the day.

Moore recorded the fish’s size before releasing it. He used a 9-foot rod to estimate length and a stretch of braid marked with a cork to measure girth. The fish was nearly as long as the rod, but that’s not what surprised Moore the most.

“I figured it had a girth of maybe 43, 44 inches he said. When one client held a tape to the cork, it measured 53 inches, meaning the tarpon likely would have weighed at least 300 pounds. Some calculations of a fish with those measurements even have the tarpon weighing closer to 400 than 300 pounds.

“I’d never seen a fish that big,” Moore said. “It was a special thing for me.”

One of Moore’s close friend was fishing the beach at least 500 yards away when he saw the tarpon jump out of the water. He immediately radioed Moore to express his surprise. Moore says he harbors no regrets about releasing it or not taking official measurements. He did not have a kill tag, which is required to kill or even remove any tarpon from the water in the state of Florida.

“I don’t kill tarpon,” he said. “There hasn’t ever been a part of me that ever wanted to. I’m not after a world-record fish. It was a personal best for me and I’m blessed.”

Fishing is more than a profession for Moore, who grew up learning from his father, Scott, who is 62 and still guiding. Moore has caught everything from sea trout to tarpon since he got his captain’s license at 18. He said he’s been fishing since “he was old enough to put bait on a hook.”

“I have pictures of me at 8 years old with tarpon. I was running the boat by the time I was 10. I grew up in the tower with my father,” he says. “He never gave me direction, I just watched him. I was very fortunate to be on the boat with him. I saw the way he treated people, made sure they were happy, and nobody caught more fish than my dad. He’d be out there until five or six o’clock.

“As a guide you have great days and you have tough days, watching my dad helped me deal with those tough days.

“If I had killed that fish, I think my father would have been disappointed,” Moore said.

He is also quick to admit he learned everything he knows from the elder statesmen of the Boca Grande tarpon fishery.

“There was a guide, Bobby Buzwell, who is about 80 now. He fished with only a cork and bait, chasing the tarpon schools. He taught me how to cast farther and more accurately than anyone. He could hit a pelican sitting on a piling 50 feet away,” he said.

Buzwell was one of the first to call Moore after the catch.

“Son, I want to congratulate you,” Buzwell said.

Though Moore’s excitement and pride is still audible in his voice, he doesn’t think the catch will change anything. Already a seasoned and successful guide at 33, Moore is booking trips up to 8 months in advance and he’s quick to refer customers he can’t take to other guides in the area.

When asked if he’ll ever be a better guide than his father, he only laughs.

“Never. He’s one of those people that never had to try, and he always had a business and great clients. He’s world-renowned,” he said.

Moore said his father cares about one thing more than catching fish: preserving the fishery.

“He’s done so much for conservation,” said Moore. “He goes up to Tallahassee; he cares more about conservation than he does about fishing. I wouldn’t be where I am today if it weren’t for him. I don’t care who you are, you can’t beat time on the water.”

“A lot of him rubbed off on me, and he would never kill a fish like that.”

One client was able to shoot some video with the remaining battery power on his iPad before the fish was released. When asked if he would do anything differently the next time around, Moore said, “Yeah, I’d have a charged camera.”