The $435 Bass Lure and 3 Other Cool Baits from Japan 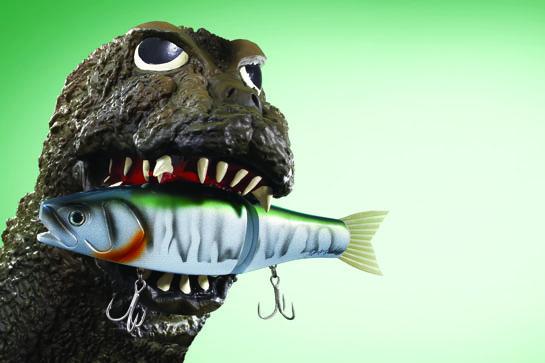 American anglers buy the lures of brands they respect. Japanese anglers buy the lures of designers they admire. Although this sounds like the same thing, it’s not. Think Wrangler vs. Versace. But now Japanese designs are turning heads in this country. Here are some haute baits from Japan’s most respected designers that are unrivaled in attention to detail, finish, and action. If you are willing to pay the price ($435 will get you one of the most popular baits on the market), these lures deserve a spot in your tackle box.

1. The Mother
Designer: Toshinori Takeyama
Would you have the guts to cast a car payment into the water to catch bass? Manabu Kurita, the Japanese angler who landed the world-record largemouth in July 2009, does just that. Kurita regularly fishes a Roman Made Mother swimbait. With it, he’s caught an 18 ½-pounder at Japan’s Lake Biwa. The Mother is 12 inches long and weighs 10.5 ounces. If there is a price to pay for the next world-record largemouth, it appears to be $435.

2. The Faith Mo-Do
Designer: Morizo Shimizu
There are not many lure manufacturers in the world that would tolerate one of its designers taking four years to create one bait. However, Japan’s Evergreen knows that when Shimizu finally does give a design his blessing, that lure will be not only a top seller but also a bona fide bass catcher. The new Faith custom jerkbaits are no exception. Look closely and you’ll see Shimizu’s name hidden in the tiger stripe pattern.

3. The X-Pod, X-Pod Jr.
Designer: Yuki Ito
Just when you thought all genres of topwater baits had been exploited, here comes Megabass, one of Japan’s premier lure makers, with a hybrid topwater that is adjustable on the fly. Their X-Pod and X-Pod Jr. ($22 and up) appear upon initial inspection to be just another couple of topwater walking baits. The treat, however, is on the face of the lure, where an adjustable lip causes the floater to morph into a wake bait and then a jerkbait.

4. The Bent Minnow
Designer: Toshinari Namiki
Japanese lure manufacturer OSP has developed a whole new genre of artificials with its Bent Minnow design ($20 and up). The company believes that its unique horizontal bent-body construction offers what no other type of lure can: “Feeble baitfish escape patterns.” One recommended way to fish this lure is by doing absolutely nothing. Cast it out and deadstick it on the surface. It’s brilliant in its simplicity.

The Mother of All Bass Lakes
Manabu Kurita caught his 22-pound 5-ounce record-tying largemouth from Japan’s Lake Biwa (near Kyoto), and the country’s largest freshwater lake has continued to cough up big fish, including a giant that Kurita says he hooked but lost that was in the 28-pound range. A 25 ½-pounder was netted by a commercial fisherman in 2009. Ironically, largemouths are considered an invasive species in Lake Biwa. Catch-and-release is discouraged, and anglers can actually be fined for returning largemouths to the lake.