The first thing I did when I got to Anglers Inn on Lake El Salto was drink a margarita. A... 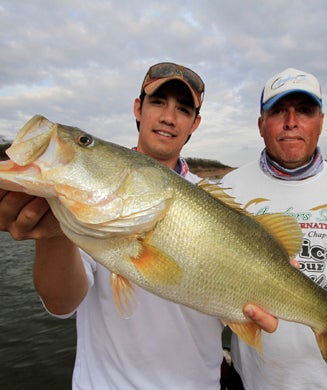 The first thing I did when I got to Anglers Inn on Lake El Salto was drink a margarita. A hustling resort employee named Ramon handed me one as I got off a passenger van after the two-hour ride out of Mazatlan, Mexico. As I sipped the drink and looked out at one of the world’s most legendary trophy bass fisheries, more employees grabbed my gear from the van and ushered it to my room. El Salto gives off an exotic fishing resort vibe, but in reality it’s an achievable, affordable destination for any American angler looking to catch the biggest bass of his life.

That’s of course if you don’t let the drug cartels scare you off.

From Desert to Jungle

The ride from the resort down to the lake takes you through about a mile of dried-up flat that looks like a war zone. Twisted pinion trees and busted fences scatter the sides of a washed out dirt road. But the war here isn’t between drug cartels and federales, it’s being waged between man and nature. Lake El Salto is a reservoir that was built on the Elota River in the late 1980s. It’s used by farmers to keep crops alive for hundreds of miles in every direction.

Water levels fluctuate drastically. During the rainy season, June to October, the lake rises 50 feet (it swells from 14,000 acres to 27,000 acres) and the region turns into a jungle. From November to May, the lake drops and the jungle dries to desert. In a few months, the flat we were driving through would be completely submerged by El Salto.

Our group of outdoor writers and fishing industry reps split up in pairs and got in boats each captained by a Mexican guide. I hopped in a boat with Mark Sexton, a Berkley bait designer and tester. Sexton helped create Berkley’s extremely popular Havoc line of bass baits and as we cruised across the lake we hurried to tie on jigs tipped with Poppa Pit Boss craws, 10-inch Federale worms, and crankbaits.

Our guide, Javiar, motored us tight along a steep rock bluff and we pitched at logs and boulders along the rock wall. Within minutes Sexton set the hook on a fish and his rod doubled over. He cranked hard and heaved a heavy bass into the boat. I snapped a few quick photos, and Sexton released the fish back into the tea-colored lake. Javiar looked over my shoulder and muttered “siete,” unimpressed with our effort.

[ Why You Need a High-Speed Reel ]

We proceeded this way for the next three hours, landing bass as Javiar called out numbers estimating the weights of the fish: “cinco, seis, siete, ocho.” Storm clouds gathered on the horizon and we were hit with a wave of warm rain. It was among the first precipitation the region had seen since October.

Javiar, an Anglers Inn guide, motors home ahead of a thunderstorm.

Sexton landed another massive bass. A true ‘grande’ with a sagging, round gut and a mouth big enough to engulf a fist. “Nueve,” Javiar said, with a shadow of a smile.

Overnight, storms rolled through and shut down our good fishing. We all struggled through the next day, landing only a handful of fish, even though monster bass busted baitfish at the surface around us all morning and afternoon. We knew they were there, but we couldn’t get them to bite. El Salto can be a bass fisherman’s heaven one day and his hell the next.

And nobody knows that better than Billy Chapman, who runs Anglers Inn resort. Chapman says he and his father, Bill Chapman Sr., helped stock Lake El Salto with bass. According to his story, they smuggled a plane full of pure Florida strain bass down from Houston decades ago and turned El Salto into one of the best trophy bass fishing lakes in the world. The largemouths flourished in the warm weather and grew huge gorging on tilapia (the lake’s only forage). It’s not uncommon to catch 10-pound bass and they say the average bass caught on El Salto weighs four pounds. Every angler in our group of 10 caught a fish over 8 pounds.

[ The Biggest Bass Ever Caught on El Salto ]

In the early 2000s, Anglers Inn was hosting 3,000 fishermen a year and employed 120 people. Chapman created a training program to recruit the local Mexicans to work at the resort and guide his boats. Now the guides, many of whom have been with Chapman from the start, know the lake top to bottom.

The author and guide Pepe landed this 7-pound bass.

In the mid-2000s, El Salto became one of the only lakes in the region to adopt strict catch-and-release regulations for bass, which prevented it from being fished out. Trophy numbers were on the rise and business was booming.

Then the drug war erupted. The Mexican military began targeting cartels in 2006 and when drug lords were arrested or killed, others battled to take over the territory. Government officials were assassinated, people were beheaded in the streets, and Americans were kidnapped. By 2012 the drug war had cost about 60,000 lives, according to Mexican media outlets. Chapman saw his number of clients drop almost in half and he was forced to temporarily lay off employees.

The bad publicity of the war was worse for Chapman than the actual violence. Cartels never target his gringo customers, he says because it would only draw attention from the government. Tourism brings in a lot of money to the state and the government wants to protect its investment. In other words, American fishermen are off limits.

“Do you think I would have survived this long down here without a body guard if the cartels were targeting gringos?” Chapman, who’s originally from New Jersey, asked me one night over Pacificos. Thanks to a loyal customer base, Chapman’s business survived and is making a comeback. He’s currently offering a package for about $2,000 that gives you 3 ½ days of fishing (the trip is all inclusive, except for guide tips).

Late June is the best time to catch a monster bass at Lake El Salto, but in three days of fishing I’d failed to land one. I’d caught some good fish—a 5 pounder on a topwater that leapt a foot above the surface, a 7 pounder on a crankbait 20 feet down, a 6 pounder that hit a jig a yard from the boat—but standards escalate quickly here. On our last afternoon of fishing I was back in the boat with Sexton. I’d had a great time fishing with the other reps, but Sexton had been hammering big bass all week and I hoped that he’d bring the luck I needed. He did.

In a matter of hours Sexton put two 6 pounders, a 7 pounder and an 8 pounder in the boat and I landed three 6 pounders and two 7 pounders. As the sun began to sink, I set the hook on my biggest fish of the trip. The bass bulldogged under the boat and I quickly followed him down with the rod tip as Javiar grabbed the net. “Big fish,” he said. It was the first English I’d heard him speak all trip. Javiar netted the bass and eyed it carefully.

“Ocho y media” he said. I lowered the 8.5-pound fish back into the water and watched him kickoff. Then I popped the top off a Pacifico, my trip was complete. I sat in the back of the boat to watch an incoming thunderstorm roll toward us.

Mark Sexton’s 9-pound bass was caught on the last evening of fishing.

Not to be outdone, Sexton set the hook on one more fish. He hauled a heavy-shouldered bass to the boat and Javiar netted it as lighting flashed around us. It weighed just over 9 pounds and was the biggest fish of the week. We shot some final photos and then cruised full speed back home, just ahead of the storm.