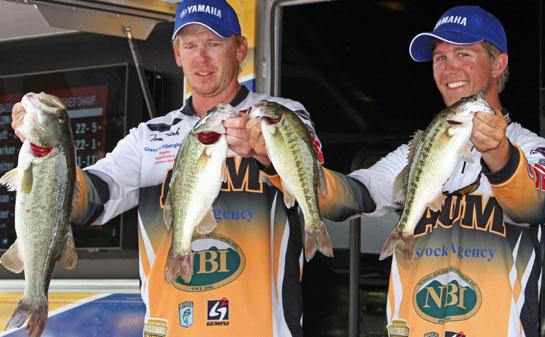 The key to AUM’s huge day two was a hefty wakebait called El Raton – a 6-inch jointed wooden rat with a 4-inch tail and a short lip that created the enticing surface action and hooked five big bass, along with one final-round kicker. Frink said he found all of his big bites in a foot and a half of water – including the 5-pounder that bit 15 minutes into day three.

After a botched cast, Frink made a risky call to reel up and try again. “Usually, you don’t want to let them see the bait (twice), but I wasn’t happy with the cast. I made another cast and she came right after it.”

Nummy considered that good mojo: “When (Frink) caught that big fish, I thought ‘Things like that don’t happen for no reason.’ So I felt that things might go our way.”

The AUM anglers caught the rest of their day-three fish and all of their day-one fish on dropshots baited with Roboworms and Strike King KVD Dreamshot worms.

The host team, Young Harris’s Brad Rutherford and Matthew Peeler placed second with 36 pounds, 8 ounces. Starting out with dropshots, they switched to a more aggressive presentation when weather opened a window of opportunity.

“About 12:30, the conditions got right for what we like to do, so we put away the spinning rods and threw the big guns,” Peeler said. “We threw noisy topwaters like a Chug’N Spook or a Gunfish and followed it up with swimbaits that look like blueback herring.”