Tips From Bassmaster’s College Series: Be Patient with Finesse Baits

Of the 64 teams competing in the Carhartt Bassmaster College Series National Championship, none drove farther than Eastern Washington’s Nick... 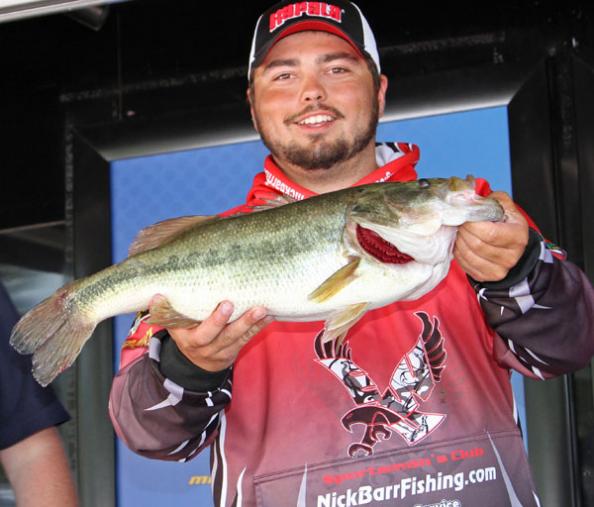 Of the 64 teams competing in the Carhartt Bassmaster College Series National Championship, none drove farther than Eastern Washington’s Nick Barr (pictured), who logged 42 hours to reach the event on northeastern Georgia’s Chatuge Reservoir. A grueling drive, no doubt, but Barr said the trip was well worth it, as this Hiwassee River impoundment’s similarities to his Washington State home waters led him and partner Jared Walker to first place on day one with a 5-bass limit weighing 19 pounds, 4 ounces.

“This is the closest thing they have on the East Coast to us really being back home,” Barr said. “This plays to our strengths – fishing finesse baits slowly.”

Understandably, the guys remained mum on bait specifics, but Walker noted that fishing a specific light soft plastic presentation around deep docks in 12-20 feet was the ticket. Notably, Barr said that, while “clear” is always a relative term, he quickly realized that he and his partner were dialed in on a pattern that delivered their targeted spotted bass, along with a couple of green fish surprises.

“People told me [Chatuge] is clear but I looked down and I could 4 ½ feet and I said ‘That’s like dingy compared to Washington water where you can see 20 feet down,” Barr said. “There’s a ton of clay in this lake. We don’t have a ton of clay (back home). We have a ton of rock, so finding fish with finesse tactics was fun. It was just like fishing back home for big smallmouth.”

Walker adds this: “If you’re finesse fishing, you want to let your bait soak. The less you move that bait, the more natural it’s going to look. I think that’s what the key was for us today.”

The tournament continues with Friday’s 6:30 a.m. takeoff at The Ridges Marina. Day-two weigh-ins begins at 3 p.m.