Muskies are widely known as the fish of 10,000 casts. It’s worth noting that vertical jigging is clearly omitted from... 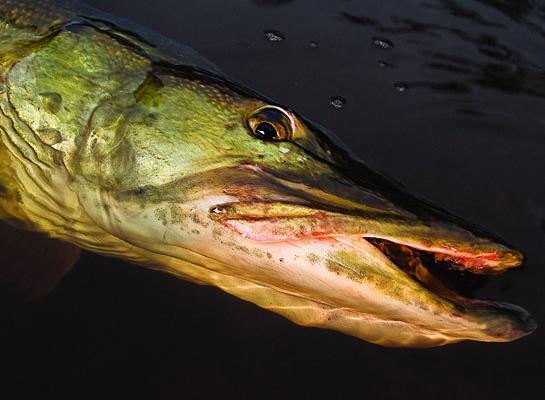 Muskies are widely known as the fish of 10,000 casts. It’s worth noting that vertical jigging is clearly omitted from that infamous pronouncement, which perhaps explains why an increasing number of anglers have turned to dropping down and jerking up muskies in the fall.

Jon Bondy, a veteran multi-species Ontario fishing guide, is sold on muskie jigging. Although he was reasonably successful at casting for the fish–often with bucktail spinners over weedy flats–Bondy says he simply wasn’t doing well enough. Today, jigging accounts for more than 90 percent of his fish.

“On bluebird days, casting for them isn’t really all that hot,” he says. “It’s okay first thing in the morning or when it’s overcast or raining, but once the sun gets up, casting goes downhill. I had to figure out a way to catch them all day long.

“The first day I ever tried jigging, we caught a 30-pounder. Now, I average three or four a day, depending on the ability of my clients. And all the big ones–50 inches or more–come from jigging deep.”

The Hunting Grounds
These days, Bondy rarely bothers fishing the flats in the morning, preferring instead to head for deep water, where he hunts down structure and bait.

“If you stay on structure–points, drop-offs, creek or river channels–long enough, you’ll eventually intercept a fish that’s moving through,” he says. “But if you see fish on the fish finder–and remember, 30-pound muskies can eat just about anything else that’s out there–you’re that much further ahead. Remember, too, that muskies are constantly on the move. Those fish are using those breaklines like highways. That’s the best place to contact one.”

Although his jigging technique is similar to most popular walleye methods, light gear and small baits are swapped out for specialized jigs (see below) weighing as much as 11 ounces, 80-pound braid, and 200-pound-test wire leaders. Instead of lifting his bait up 6 inches to a foot, as with walleyes, he sweeps it up 3 to 4 feet. Hooksets, too, are more pronounced–the snap is supplanted by a hard, drive-it-home stroke.

Bait ‘Er Up
Finding appropriate baits is a challenge, Bondy says, which is why he started making his own. I’ve fished these baits with Bondy a day or two each season, from June through December, for more than a decade now. Over the course of all those trips, we’ve hooked fish every time–twice we’ve had 10-fish days. That’s a good day of muskie fishing anywhere they swim.

Bait it Like Bondy
The Bondy Bait is a large, soft-plastic tailspinner poured around an integral, weighted, stainless-steel frame. It’s available in three sizes (from 5 to 11 ounces; $18.50 and up). Since 2005, it has been responsible for 12 muskie tournament wins.