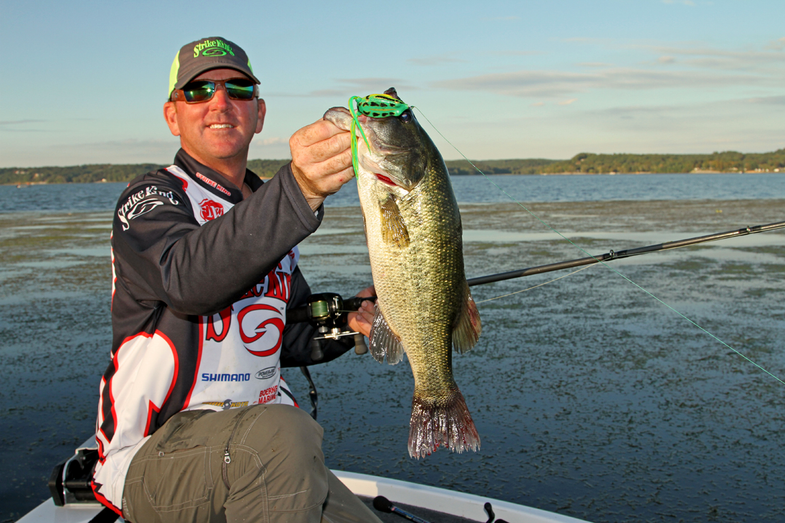 For mine, I’m going with quality.

The quality of fish was certainly present, but so was the ambiance, the company, the learning, and a special honor I wasn’t expecting.

October 6, I joined Texas pro Ray Hanselman for an afternoon of grass mat fishing on Tennessee’s Kentucky Lake. The memories are many, but I’ll hit the high points:

—When last I saw Hanselman, I was interviewing him five months earlier for his Rayovac FLW Series win on Lake Texoma. That victory completed his historic sweep of the Texas Division’s three events—a fact that would come into play later in our trip.

—An unseasonably warm, calm day allowed us comfortable running and efficient fishing conditions, so we had no trouble thoroughly working a sneaky little mat tucked along the lake’s western shore.

—“On” was a gross understatement of the general largemouth demeanor that afternoon. We pulled a bunch of nice ones out of the grass, but equally entertaining were the big bass that tracked our frogs and bumped the mats with their heads, often knocking the baits a few inches off the cheese. Several eventually found spots thin enough to push through and gobble the frogs.

Complementing the show, aggressive fish boiled and busted big gizzard shad in the open holes scattered throughout the grass. Twice the green back beasts chased terrified shad out of the water and onto the matted grass.

Three, two, one—kabloom! The ensuing explosion of bass snatching vulnerable prey from below was worth the price of admission.

I asked a lot of questions, but even in my silence, insightful tips rolled out of Hanselman with casual ease. For example, track marks and blow-up holes indicated previous anglers had found takers.

“That’s a good sign,” Hanselman said of these obvious marks. “I’ll target those recent blow-up holes because there’s something down there that’s holding fish. It might be rocks, a stump, or logs.”

Another tip: During sunny conditions, work the corners of holes and breaks because dragging a frog through the open middles while bass are tucked into the shadows only spooks the near side with braided line crossing overhead.

The aforementioned honor came toward the end of our trip. I’d just boated a chunky bass and as I released the fish, Hanselman nonchalantly dropped this chest thumper on me:

“That rod you’re using, that’s the one I used to catch 90 percent of my Texoma fish.”

I’ve caught larger fish; I’ve caught more fish. I’ve caught them in more exotic locations. But the totality of tangible, intangible, and downright meaningful elements I experienced in just a few hours on Kentucky Lake combined to make this a soul-filling experience.

My best fishing trip. Thanks Ray.

Note: Three weeks after this trip, Hanselman would go on to win the Rayovac FLW Series Championship on the Ohio River. I’d like to think that our trip helped prepare him for this accomplishment, but…