Big Fish: How to Catch Record Spotted Seatrout Like this Indian River Monster 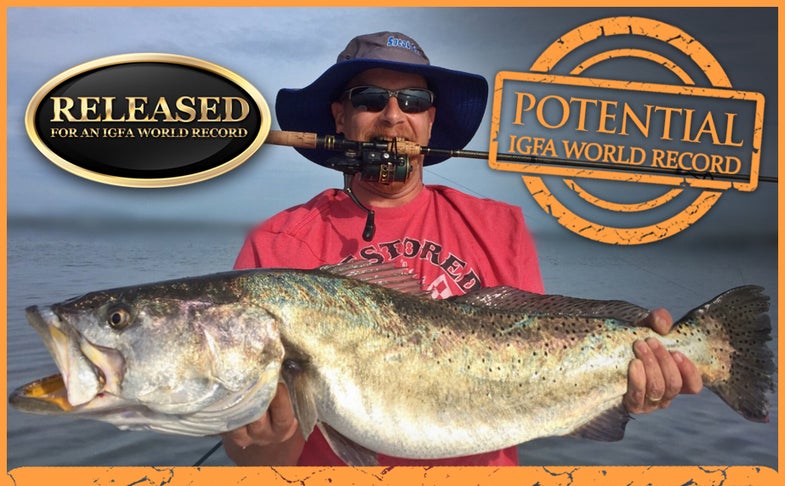 A 4- to 8-pound spotted seatrout is a heck of a catch, 8 to 10 pounds is world class caliber, but a 14-pound seatrout? That’s a lifetime fish, and a borderline world record.

When Luke Ledbetter, who was fishing with Captain Peter Deeks of Merritt Island, felt a hit on his live mullet in Florida’s Indian River, the hooked fish V-waked to him like a big redfish would. But it wasn’t a red drum—it was a monster seatrout.

According to the Florida Today, Deeks said, “Every so often we’ll catch a fish that really impresses me, and this one did. I’ve caught longer fish before, but the girth on this one was just incredible.”

Deeks measured the trout at 34.25 inches and, comparing notes from Deek’s previous catch of a 33-incher that weighed 13.9 pounds, this trout had to be over 14 pounds. And according to Deeks, “It was even fatter than that 13.9 pounder.”

Could it have come close to the world record of 17 pounds 7 ounces? Possibly, but we will never know since Deeks released the fish. Sometimes the life of a trophy fish like that is better off saved than memorialized in the record books.

The key to finding large specks is to look for potholes in the seagrass beds, as trout tend to stage there and lay in wait to ambush baitfish or suck down shrimp as they funnel by. Anglers either wade the grassflats or pole over the potholes, spying for shadows to sight cast to.

Ledbetter and Deeks were live-lining mullet over a pothole in the Indian River to bag the spiketooth, which is a staple method to target large seatrout. While live mullet will obviously get the attention of large trout, artificial lures will also tempt a strike. Try 3 to 4-inch DOA shrimp, which are the main ammunition for Florida trout hunters. Cast the shrimp and let it simply sink and flow with the tide, twitching it every few seconds. Switch between the two sizes to see if one produces better than the other. Zara Spooks and Top Dogs plunged across the water surface get attention as well.

The early morning sunup bite is usually red hot, but so is night time darkness as trout will congregate around dock lights and outside of any shadowlines. During the dark hours, toss a DOA glow shrimp, allowing it to sink and flow by the pilings or underneath the planks. When hooked to a seatrout, keep a light drag: trout have notoriously paper-like mouths that a hook will rip through if too much pressure is applied during the battle. Slow and steady reeling wins the race.

Once hooked up, don’t force or horse the trout in, or you’ll lose the fish. Keep your ears open and listen for the tell-tale pops and sucking noises of seatrout slurping down shrimp and baitfish on the surface. Also keep an ear out for the “sizzle” of baitfish schools as they push to the surface when being pursued by seatrout schools. Larger seatrout tend to be more solitary creatures, so try a variety of areas in your trophy hunt. Primo seatrout haunts in Florida include the flats of Indian River Lagoon, Merritt Island National Seashore, and Fort Pierce, where the current world record was caught.