It’s shark season in New Jersey, so when Mike Szabo cast out a smelly bunker head during a nighttime surf-fishing... 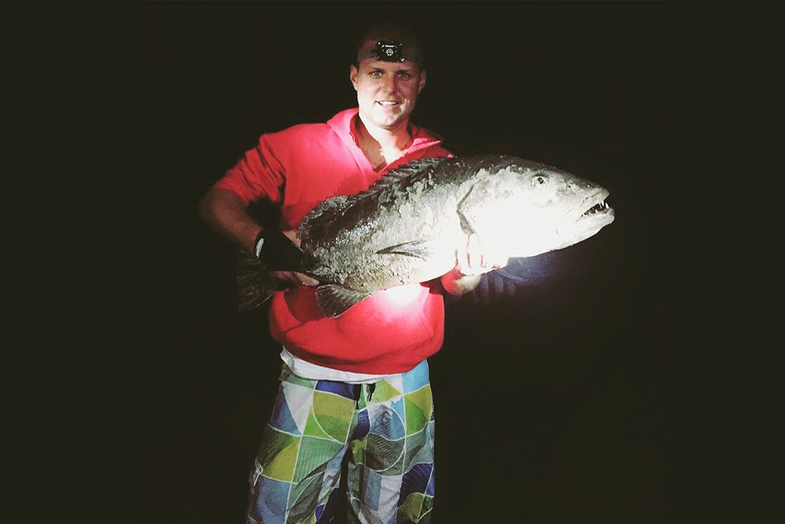 It’s shark season in New Jersey, so when Mike Szabo cast out a smelly bunker head during a nighttime surf-fishing session at Island Beach State Park, it naturally got whacked.

“The rod kind of buckled down a bit, so I leaned back on it and it peeled off drag for a good three runs,” says Szabo. “I thought it was a small shark or something.”

After a 20 minute tug-of-war, Szabo bent over in the undertow, grabbed the leader and saw—wait, what?—a 25-pound cubera snapper?!

“Man, I didn’t know what it was,” says Szabo. “I saw it in the undertow and it had a silvery back to it so then I thought it was a striped bass. I got closer and saw its set of teeth and told my buddy TJ ‘we’re gonna need the long pliers’.”

Cubera snapper are a voracious, canine-tooth filled snapper species commonly found in the temperate waters of Central America, Mexico and the Caribbean, but are extremely rare—if not impossible to find—along the Northeast coastline. It’s anybody’s guess as to why or how such an exotic species made it up to Jersey to check the scene out, but its possible the 79-degree surf water temperatures may have provided the impetus for the migration of the snapper.

Also, Szabo said he was fishing near some submerged structure off the beach, which cubera snapper are known to frequent. It’s not too unusual to see exotic visitors such as mahi, cobia, Spanish mackerel, and bonito occasionally make their way to Jersey surf waters in late summer, but cubera snapper? That’s definitely a first for the Jersey Shore as far as I know. Which begs the question—are there any more around? Well, there’s at least one: Szabo released the snapper back into the surf.

What unusual or unexpected catches have you seen in your lifetime? Tell us about it in the comment section below!