Teach a man to fish, you feed him for a day. Teach a kid to fish, and that kid better... 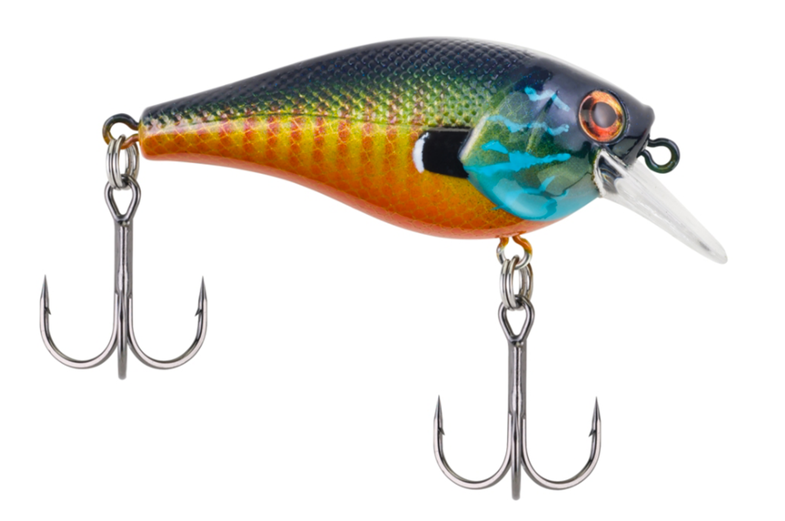 Teach a man to fish, you feed him for a day. Teach a kid to fish, and that kid better get you an awesome present for Father’s Day. Okay, that’s not exactly how the saying goes, but you get our point: It’s time to say thanks to all the good dads out there. So, the OL editors have assembled a list of 17 items that every fisherman father would be happy to receive. 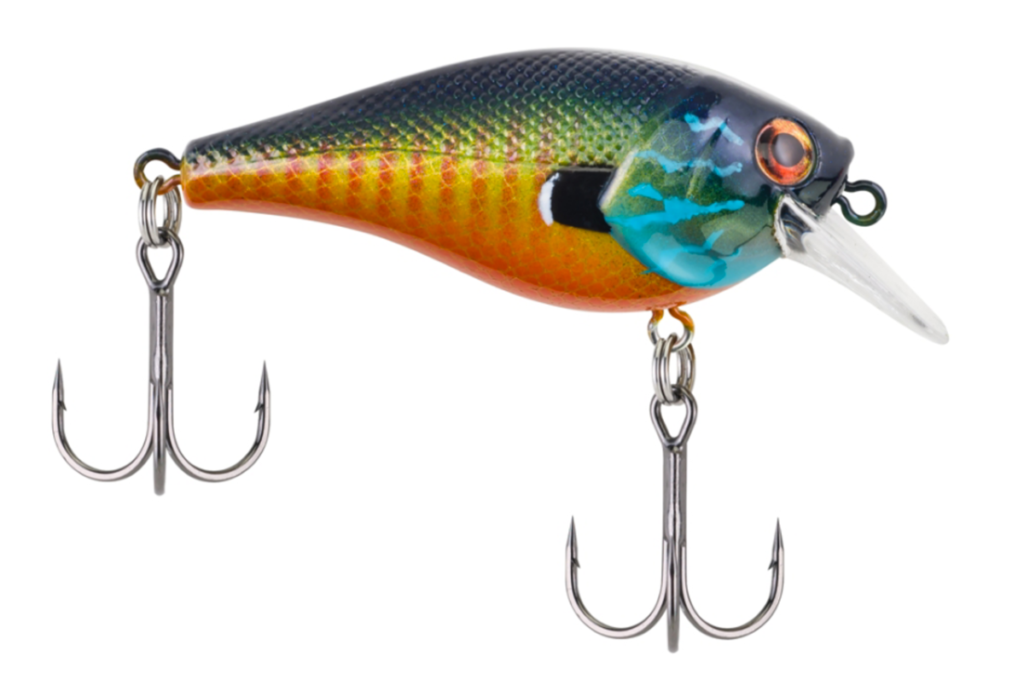 There’s always a lot to see at the ICAST show, but one of the new lines that caught our eye last summer was Berkley’s introduction of six new hardbait models. One lure won’t break a kid’s piggy bank, and each of these vibrant, convincing baits comes in 12 colors. We like the Pittbull, but you can check out the other models in Berkley’s lineup here. —Natalie Krebs 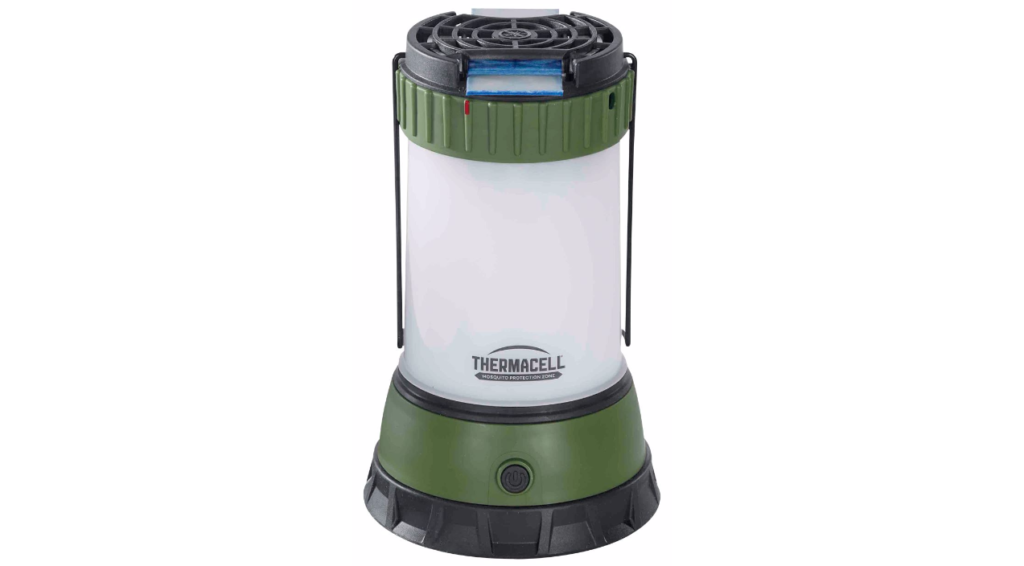 There are two things every summertime campsite needs (besides a good spot to pitch a tent and red-hot fishing): a light source and stout bug dope. Thermacell has combined those two necessities in one device: the new Mosquito Repellent Lantern that provides 40 hours of intense LED lighting, and 225 square feet of mosquito-free outdoor living. The device runs on the same butane cartridges and slow-burning repellent strips that work in other Thermacell units. The light gives 360-degree illumination and is powered by 4 AA batteries. —Andrew McKean 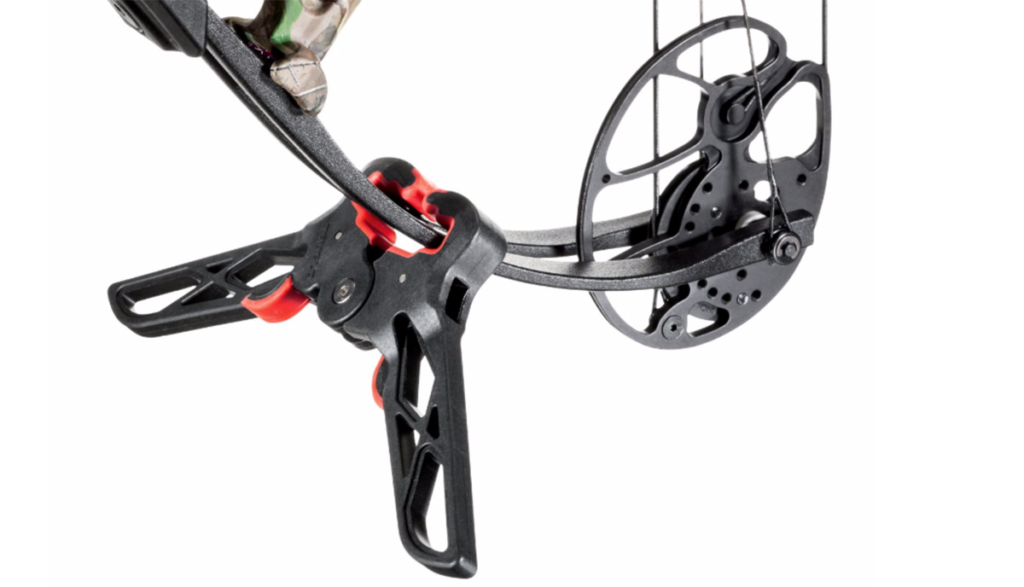 Watch your dad closely when he unwraps this gift—his jaw will drop. Then tell him that it’s a “Bow-Jack Mini.” His jaw will drop again. (Don’t sweat it If he doesn’t give you a hug until October.) He won’t quite know it until he uses it, but the Bow Jack Mini will help dad keep his bow at the ready during those long stints in the woods when nothing much happens. —Gerry Bethge 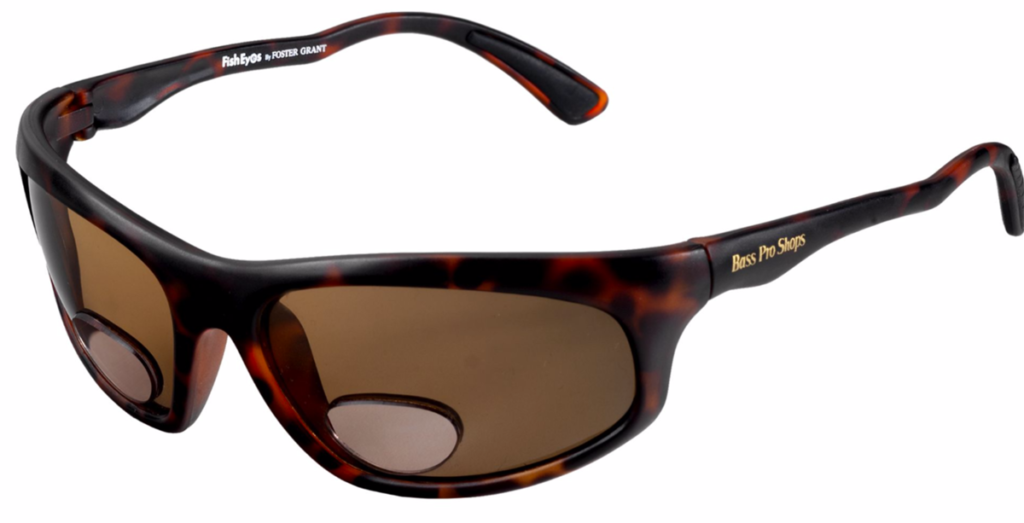 He might be a bit too proud to admit it, but your dad’s eyes just aren’t as good as they used to be. If tying a simple knot makes fishing more frustrating than fun for him, consider these non-prescription polarized bifocal sunglasses—cheaters for anglers. They feature lightweight acrylic polarized lenses for spotting fish and optically centered bifocal magnifiers available in three strengths (+1.50 to +2.50). The magnifying lenses are clear which makes it easier to read a fish-finder screen or IPhone.—GB 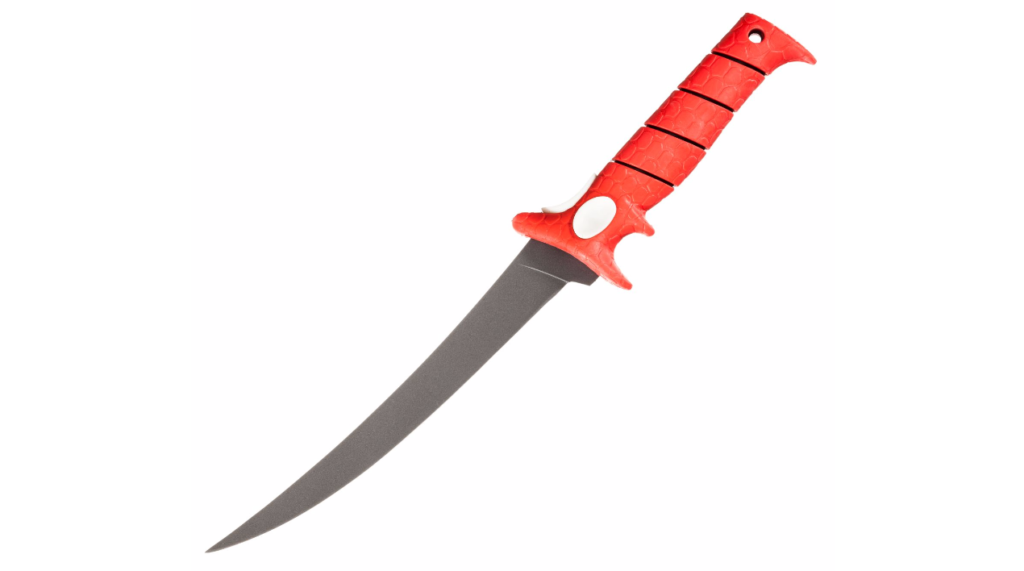 Bubba Blades are known for being extremely comfortable in the hand and have great, grippy handles. This comes from a “no-slip” thermoplastic polymer that’s wrapped in synthetic rubber. Once you put this knife in your dad’s hand, he’s not going to want to put it down. The knife is made of a single piece of high-carbon stainless steel that’s bonded with titanium. The company says it has a Rockwell hardness rating of 56-58. You’ll still probably want to hone this knife out of the box to get it shaving sharp, but that’s just part of the fun. —Alex Robinson 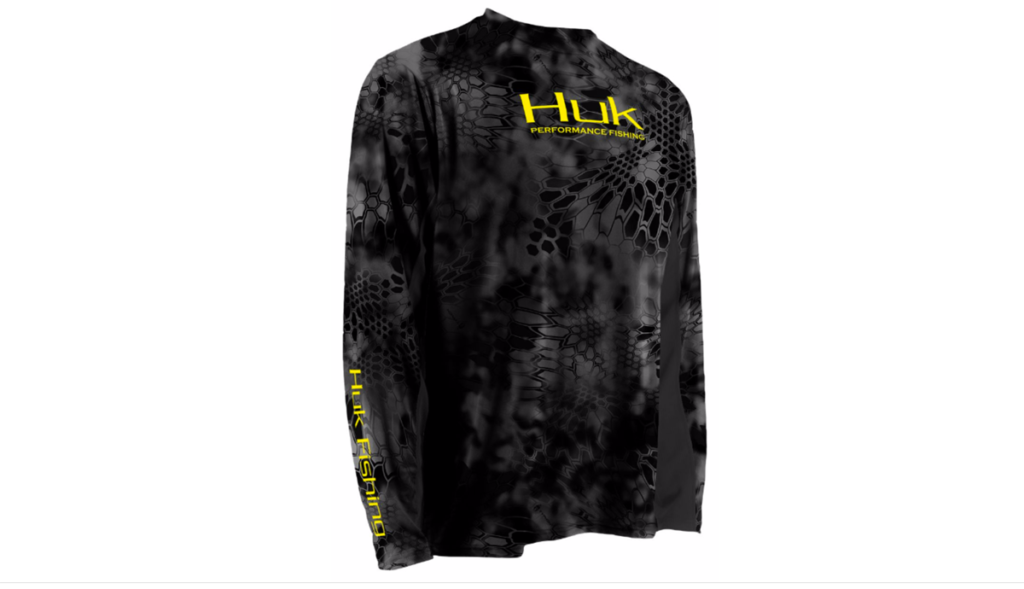 Fishing can sometimes be brutal. If you’ve ever spent an August afternoon on the white-hot front deck of an offshore boat in the Gulf of Mexico, you know precisely what I mean. There’s nowhere to hide. Though it might be an overstatement to say that you can hide in a shirt, this HUK high-performance technical shirt might be the closest thing to it. Moisture-wicking and antimicrobial technologies mean that you can actually stay relatively cool even when it’s 100 degrees with 100% humidity. SPF sun protection and long sleeves protect you from the sun’s damaging rays. Dad might not really care how he looks when he’s going toe-to-toe with a 100-pound yellowfin, but these shirts are also pretty cool looking. —GB 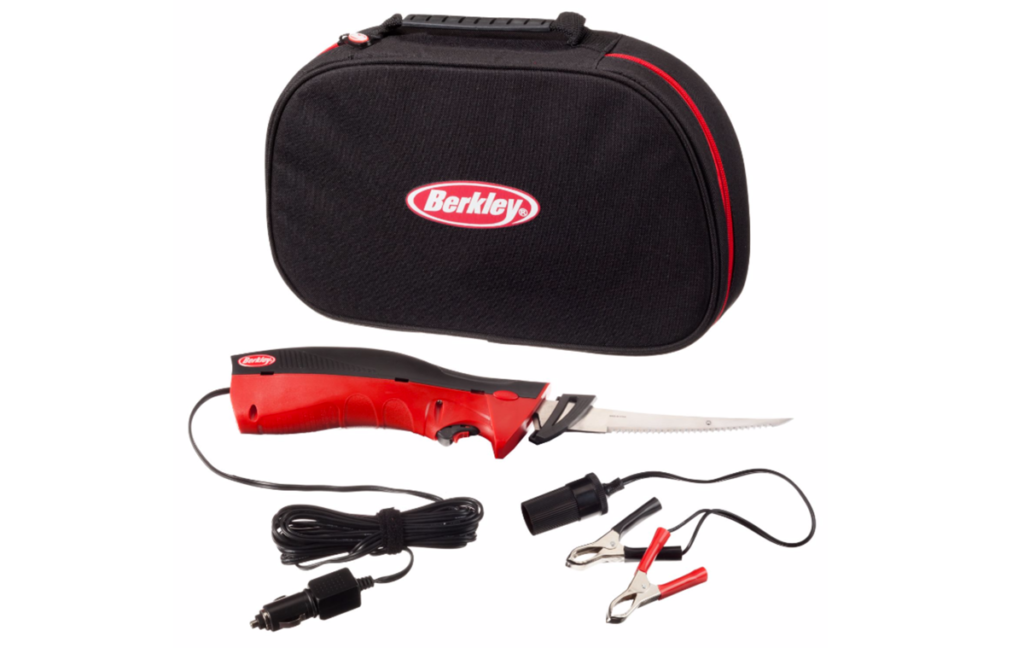 Shocker—I’m an old school sort of guy. Thing is, when I’m faced with a huge bunch of fish to clean, I’m happy to go new school in a hurry. I’ve used this Berkley knife for my fish-filleting and meat-carving needs for five years and absolutely love it. It makes quick work of all soft-fleshed fish I’ve ever tried it on. —GB 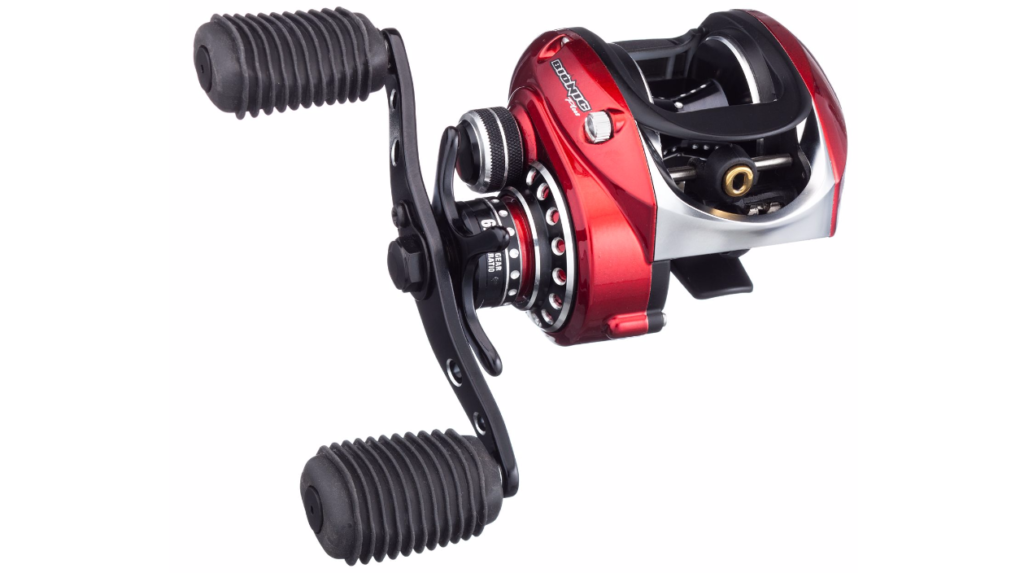 I got to fish with the Bionic Plus for big, bull reds in Louisiana during our annual tackle test and the reel stood up to the challenge. At only $79 this baitcaster is a heck of a deal. It’s also a workhorse with some really nice features, including an impressive dual-brake cast-control system. The Bionic Plus won our Great Buy award in the baitcasting division of our test. And, If it can survive a week of fighting 30-inch redfish, you know it will have no trouble with even the meanest bass your pops lays in to. —AR 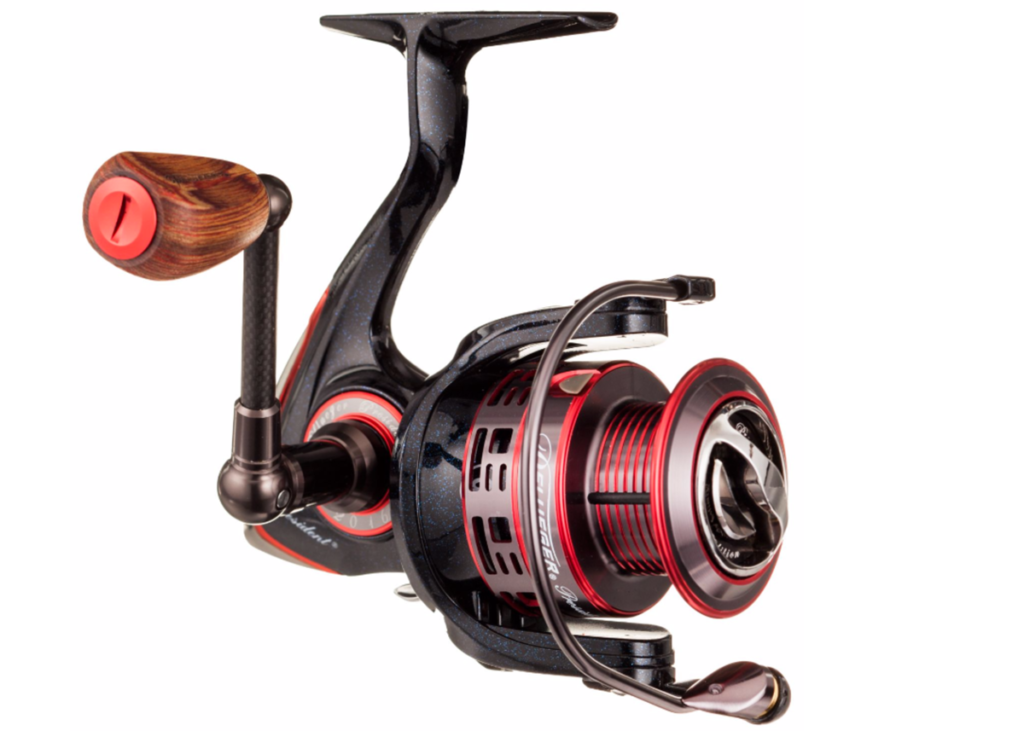 Through the years, the Oudoor Life tackle test team has fished all manner of rods and reels—some great, some good, some ugly, some gorgeous. Form, however, never wins out over function. On occasion, though, we come across a reel that fishes great, is pretty cool looking, and relatively inexpensive. The Pflueger President Limited Edition is available for this year only and features higher gear ratios, an upgraded drag system, and faster retrieve rates than previous models. It’s one smooth reel and a topnotch choice for all freshwater and light saltwater duty. —GB 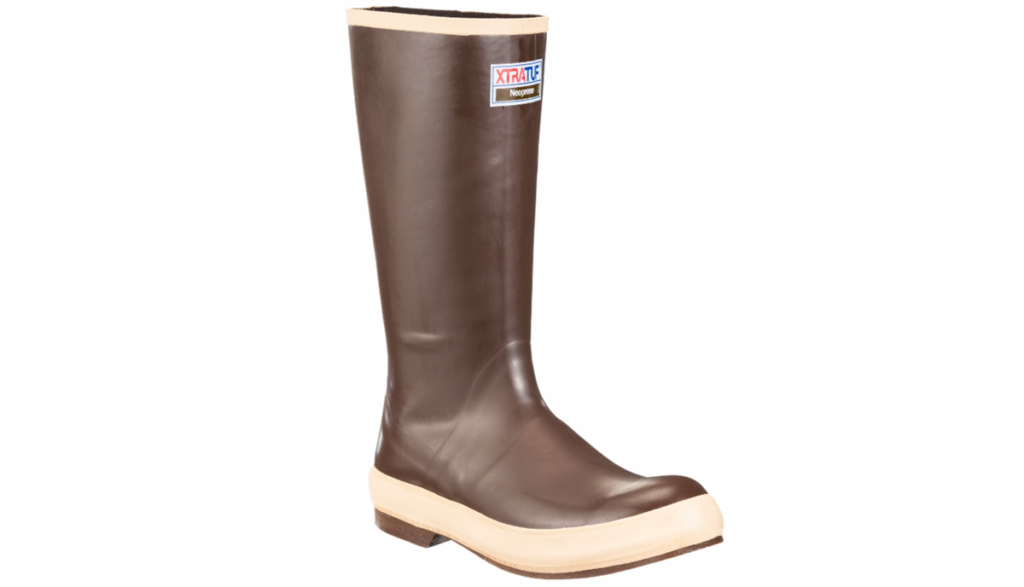 If your dad is a fan of the television series Deadliest Catch, he may already be wondering why all the crab fishermen wear the same boots. Commercial fishermen in Alaska and elsewhere have relied on Xtratuf boots for decades—for good reason. The Legacy 15-incher is 100% waterproof, comfortable, and, well, extra tough. But you don’t have to be on a commercial fishing boat to appreciate them. They’re great for farm and yard work or for splashing around in a favorite trout stream, too. —GB 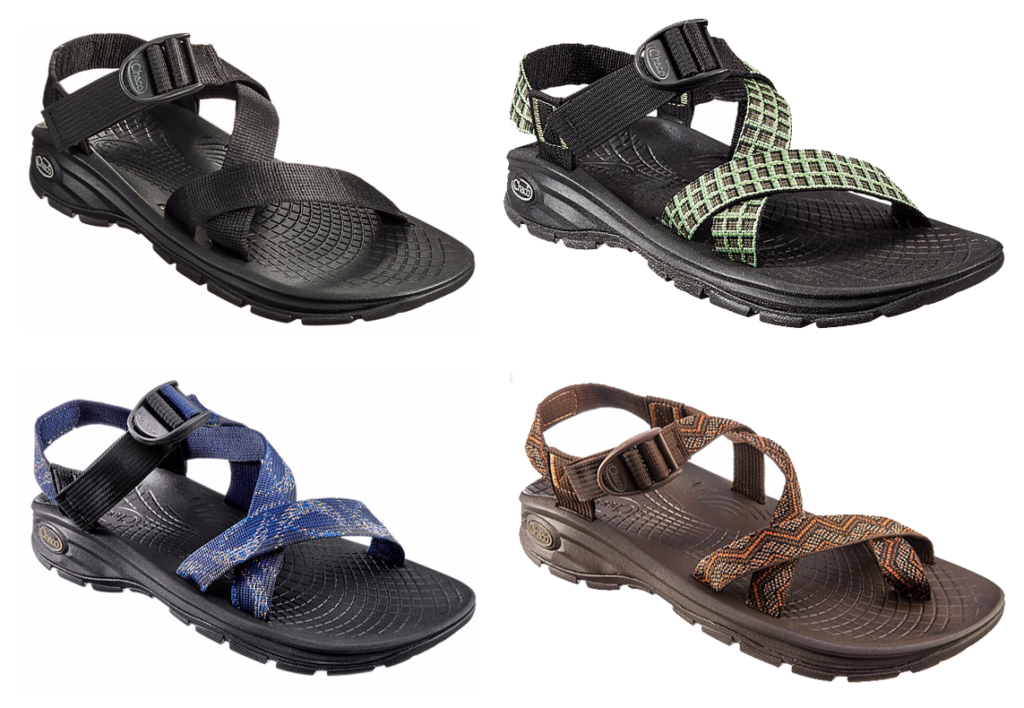 Dads are notorious for wearing ultra dorky shoes, so odds are he could use an update. Chacos are durable sandals with grippy soles, making them great crossover shoes from land to boat to water and back again. I’ve worn my pair on rivers, lakes, and through whitewater. They’re perfect for boat decks and float rafts, and they’re also suitable for hiking to the next fishing hole. Even better, they’re easy to hose off when things get messy. Chacos come in a variety of color, sole, and strap options, and you can even customize your own pair on their website. Just don’t let him wear socks with these. —NK 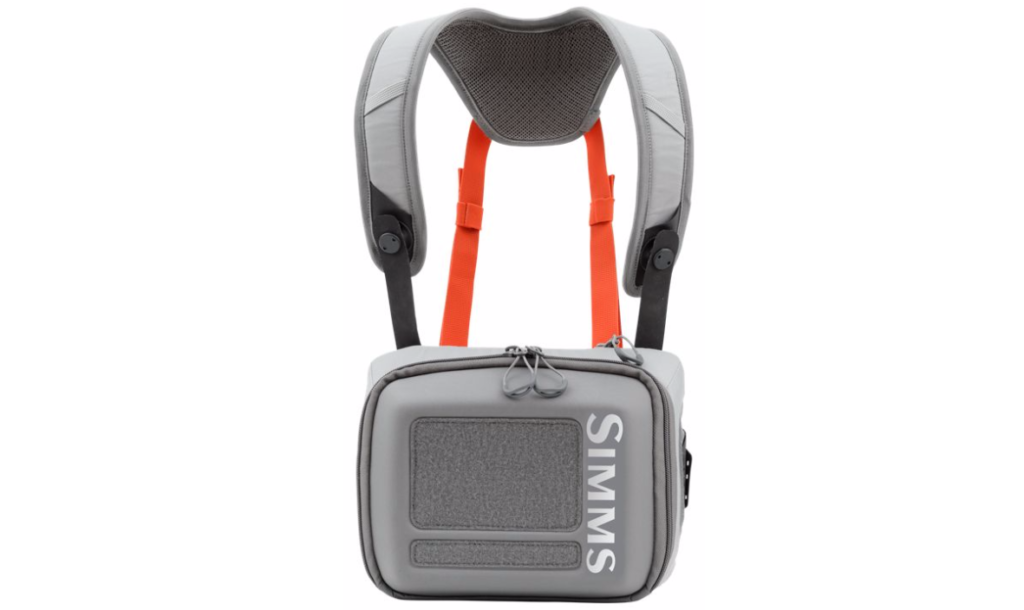 Less is more, at least when it comes to hauling flyfishing gear around a river. If your dad is still sporting an old-school vest with a few dozen pockets full of junk, do him a favor and help him upgrade to a chest pack.

The Waypoints Chest Pack is simple by design. The large central compartment sits high on your chest and puts everything you need front and center. It has a center divider you can move around to accommodate your specific load of flyboxes and other accessories.

It has magnetic tool ports to hold hemostats and has a small exterior pocket that zips tight for extra storage. In addition to being able to carry it on your chest, the pack has attachment points that work with any of Simms’ Waypoint Backpacks.

The quality of construction is typical Simms, meaning it is overbuilt and will withstand even unreasonable amounts of abuse. —JBS 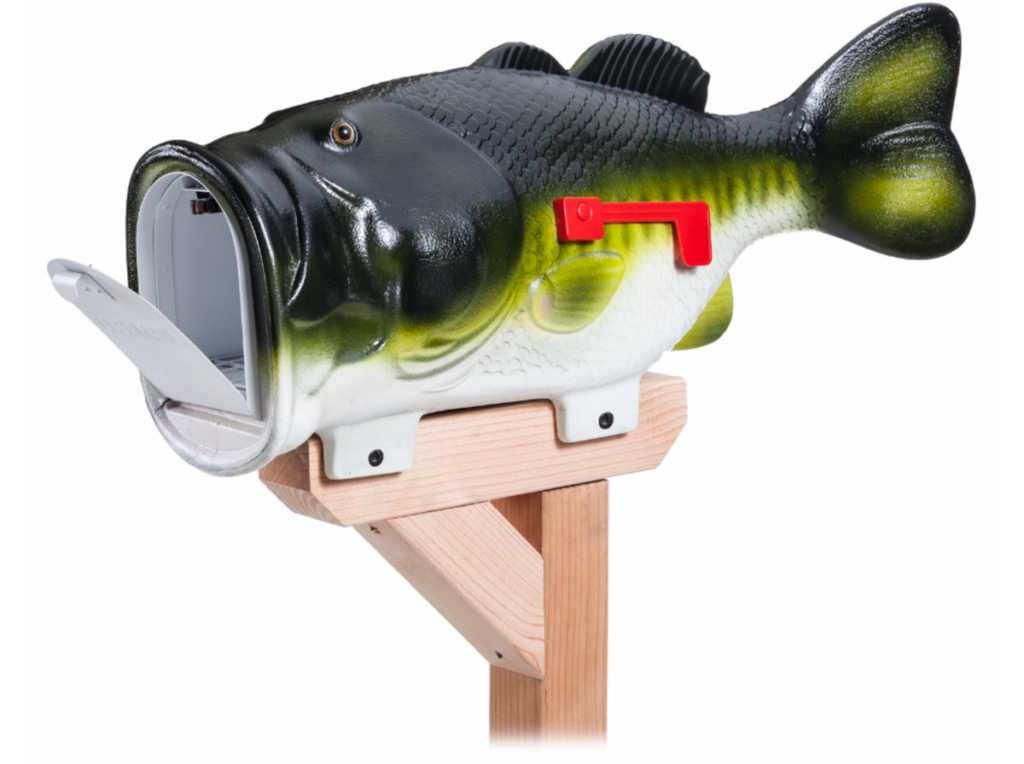 If your dad loved it when you bought him Big Mouth Billy Bass years ago, he’s sure to be thrilled with this lunker of a mailbox. It measures 40-inches long and 16-inches high—bigger than the best largemouth he’s ever caught and guaranteed to fit the next Bass Pro Shops catalog. It might not be strong enough to withstand repeated drivebys from the snowplow, but it’s plenty tough and realistically painted. It even features taxidermy-style eyes. All hardware is included. —GB 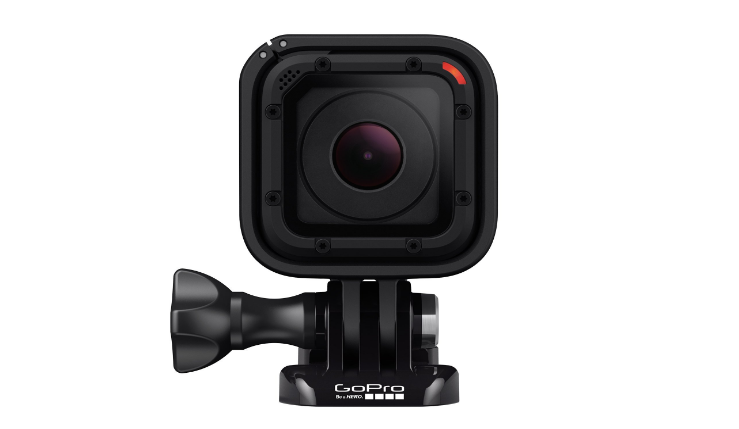 The Session is probably the best underwater camera bargain on the market. The session is designed to be waterproof without any additional housing and you can sink it down to 33 feet below the surface. But the best thing about this camera is that it only has two buttons. Hit the big red power button and the camera turns on and automatically starts recording. Press the button again and the camera stops recording and shuts off. Have the grandkids arrange the video settings, throw the camera in the old man’s tackle box and he’s good to go. It shoots crisp video at 1440p30, 1080p60, and 720p100. The session comes with a variety of useful mounts, and won’t take up much room in the boat —AR

I’ve been rocking a pair of these sunglasses for a couple seasons now, and wouldn’t think about going out on the water without them. The polarized blue mirror lenses do an excellent job of filtering out nasty UV rays, cutting down on glare and helping me to spot fish. I don’t know any of the science behind it, but I do know that they work well and reduce the fatigue you can experience during a long day’s outing.

The frame design is smart. It provides good coverage from the sides to block light coming in at an angle and the frame has enough width to it to fit my big head, making it comfortable to wear for hours on end.

The air vents on either side of the frame help prevent heat and vapor from sweat from getting trapped, but are unobtrusive enough to not look awkward. —JBS

This hard-wearing, go-anywhere cooler bag is made with the same puncture-proof and abrasion-resistant polymer and welded seams that are used in whitewater rafts, and the abundant tie-down points make it a great boat companion. But it’s also at home on the racks of ATVs and back-country Jeeps. I’ve even seen Hoppers used as panniers for backcountry horsebackers. The popular cooler has been updated for Father’s Day with a new color, called “Field Tan,” and the second-generation models keep ice even longer than the early versions. The rugged zipper is leakproof. If I need to keep ice for days, I pack newspapers or magazines above the contents, to ensure cold doesn’t leak through the top, which has less insulation than the sides and bottom. —AM 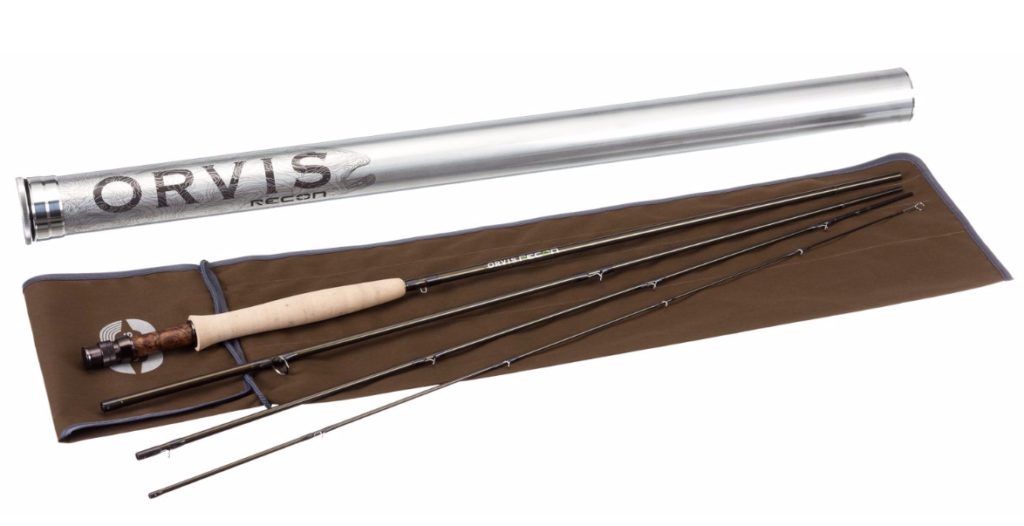 This line of fly rods was introduced by Orvis a couple seasons back and I’ve been using one since then on the rivers around my home in Bozeman, Montana. Mine happens to be a 9-foot 9-weight, which is without question the most versatile all-around trout rod you can get. The things that appeal to me about the Recon include that it is built with some very user-friendly features. The alignment dots on the rod make quick work of setting it up, especially in low light. The dual rings on the uplocking reel seat keep the reel firmly in place over a long day of fishing.

Aesthetically, the rod has a very business-like look. The “shadow green” blank, black nickel reel seat and dark wood insert give the rod a stealth look, which is in keeping with its backcountry adventure vibe.

The rod’s price is justified based on how well it is designed and how it performs on the water. It gives the caster a lot of control, both when it comes to booming out far-reaching casts and when working line in tight quarters. —JBS