It was textbook Florida bed fishing – teasing, taunting, pestering a territorial fish until it bit and unleashed a fury... 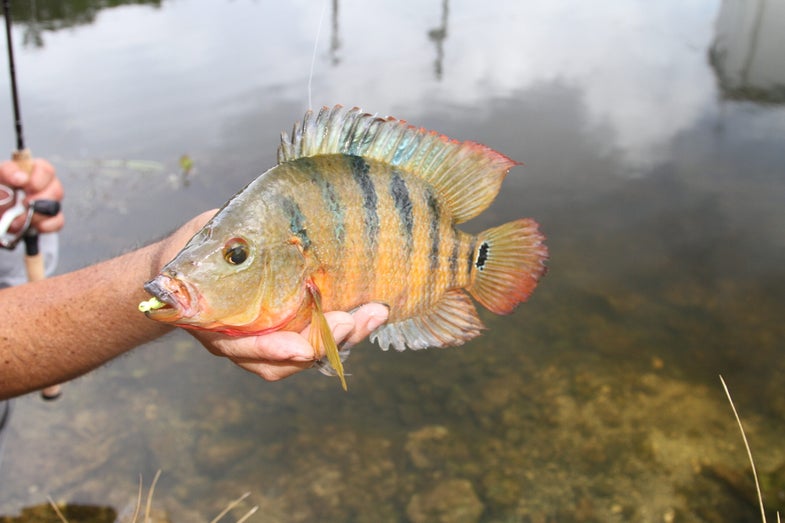 It was textbook Florida bed fishing – teasing, taunting, pestering a territorial fish until it bit and unleashed a fury of burning orange and black.

This was no mossback bucketmouth; rather, it was a Mayan cichlid – one of the many exotic invasive species flourishing in South Florida’s flood control canals. Illegally introduced through aquarium release and aquaculture efforts, these hardy fish have upset the local ecology by competing with native species for food and bedding space.

Not a good deal for smaller bass, panfish and catfish, but one tussle with a feisty fish of South American origin and you’ll be an instant fan. Hardy and hard-charging, these fish will give you all you want, and then some.

Joining the Mayans are Midas cichlids, spotted tilapia, African tilapia, snakeheads, clown knifefish, jaguar guapote and many others. I tempted my Mayan with a live earthworm rigged on a light wire hook with a split shot – kind of like a shaky head. Most will also hit a variety of small jigs, swimbaits and suspending/slow sinking slash baits.

The good thing about these exotics is that they reproduce quickly, so there’s no lack of opportunities for anglers in boats or on foot. The state’s no fan of the invasives, so there’s no size, season or limit on any exotics, except for the butterfly peacock bass stocked during the 80’s to help local largemouths control the proliferation.

Taken as a whole, the exotic invasion and the peacocks sent in to eat a bunch of them has created a fascinating sport-fishing niche in sunny, subtropical South Florida. It’s like fishing in the Amazon – without the airfare.

For information on exotic species in Florida waters, visit the website.