Fishing Gear: 5 Fish Finders and How to Use Them

Thanks to recent developments in sonar, you don’t need a 72 Viking convertible with multiple widescreen displays to count the... 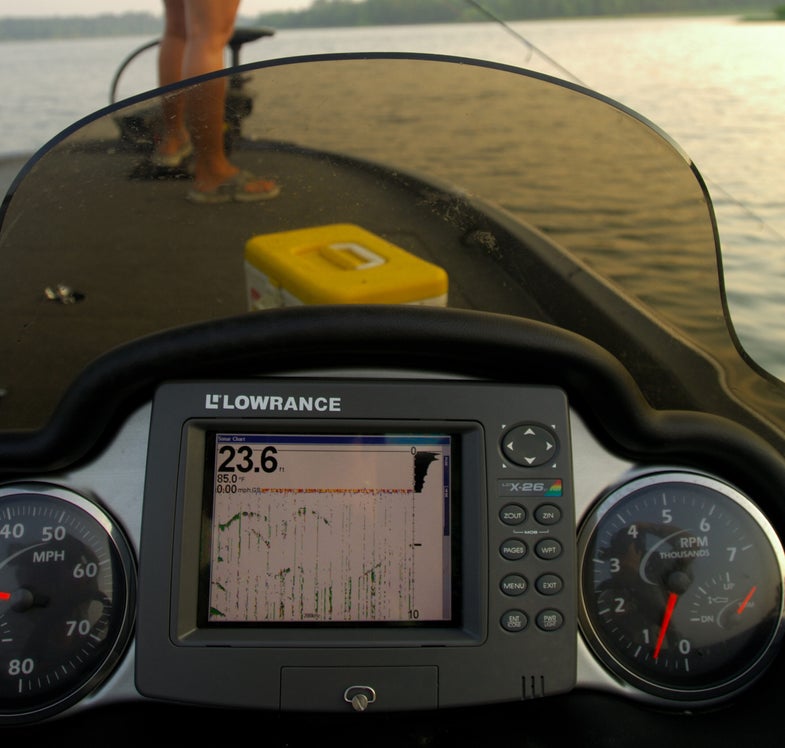 Thanks to recent developments in sonar, you don’t need a 72 Viking convertible with multiple widescreen displays to count the scales on fish 100 feet below your boat. Instead, dozens of compact fish finders are now available that show what’s holding in the water column beneath your butt as well as on the bottom with near-photographic precision. These new devices don’t cost as much as a new car, either. But how do you pick the right one? An understanding of sonar fundamentals is the best place to start.

BASIC TRAINING
Like many developments in electronics, sonar has its roots in military technology. Terms in the marine electronics industry have more acronyms than the Pentagon, but fundamentally, sonar is an acoustic system that uses sound waves for detection and navigation. In fish finders, those waves actively detect underwater objects by sending out pulses of sound and then listening for the returning echoes. The setup includes the display and controls, the power source, the cabling, and the transducer, which acts as an antenna.

Transducers are classified by operating frequencies—measured in kilohertz—by cone angle, and by how they are mounted. For a small boat with an outboard, a transom-mounted transducer works best. It is out of the way of the trailer bunks or rollers and easy to install or remove, and an optional kick-up bracket offers protection from encounters with sunken logs or rocks. The acrylic housing, which prevents corrosion, is compatible with metal or fiberglass hulls. Most important, transom versions offer dependable performance at moderate speeds, typically 40 miles per hour or slower. Cavitation and excessive propeller turbulence can impact the sonar signal and diminish accuracy, which is why through-hull transducers mounted away from the stern are more common on larger craft.

The cone angle is measured by the width of the beam or sound wave. The range varies from 9 to 60 degrees. Wider cone angles reveal a larger view of the bottom. As the depth increases, the angle naturally follows for an even wider display. Think of it like an adjustable flashlight beam. Shallow-water anglers typically opt for a transducer with a wide cone angle; narrow cones penetrate greater depths.

Although single-cone transducers are still common, multi-cone transducers are the latest trend. The addition of dual-beam, triple-beam, and side-beam cones allows the operator to see more water. That provides a better opportunity to spot bait, fish, or fish-holding structure that might not be directly beneath the hull. Every manufacturer has developed its own labels for the different types of sonar—such as Down Imaging (Humminbird), DownVision (Raymarine), DownScan Imaging (Lowrance), and DownVu (Garmin).

NOW YOU SEE THEM
Frequency is the other important consideration when choosing a transducer. Popular frequencies are 50 and 200 kHz. As a rule, the higher the frequency, the better the resolution and detail. Lower-frequency transducers, such as 50 and 83 kHz models, penetrate deeper, but the detail is not as precise.

There are other aspects of frequency to consider as well. Standard sonar transmits one frequency at a time. With only one echo to evaluate after it returns, the information is limited, so clarity and resolution are limited too. Electronics companies developed CHIRP, or Compressed High-Intensity Radiated Pulse, which blasts out a wide spectrum of frequencies simultaneously. The effect is that the pulse covers more space and time, staying on underwater targets longer. When these expanded pulses return, the data is enhanced, resulting in much greater detail, resolution, and accuracy.

But none of these technologies is useful unless you can actually see targets on the screen, and that’s where the fish-finder display comes into play. Pixels are samples of the original image or target, and their spot on the display corresponds to its physical coordinates. They are shown as dots or squares in the two-dimensional LCDs (liquid-­crystal displays). Gray-scale units still have a loyal following at a lower price point, but color units are easier to see in direct sunlight and offer better contrast to distinguish between different objects. Units with split-screen capability also allow easy comparisons and better identification of target species, baitfish and structure than with a dual-frequency transducer.

As with high-definition color televisions, the higher the resolution (or number of pixels) a fish finder has, the sharper and more detailed its display. Other features—such as waterproof housing, memory playback, manual and automatic settings, and mount or tilt options—are also important factors to consider.

The latest generation of compact fish finders certainly helps level the playing field for small-boat anglers. With detailed CHIRP and side-scan capability, the fish barely stand a chance. However, you can only take full advantage of the potential when you completely understand the performance capabilities of each unit. So take the time to read the owner’s manual, and then get out on the water and actually use your fish finder—­often.

Looking for a place to start? Here’s a lineup of color fish finders that will light up the fish but not set you back more than the price of a quality rod-and-reel combo.

In this world of 24/7 instant connection, smartphones are as essential as tackle boxes to most anglers. So Vexilar developed the SonarPhone as an alternative to traditional fish finders. It comes with a 200 kHz dual-beam (20/40 degree) skimmer-­style transducer and temperature sensor. By downloading the free SonarPhone app, you can use your smartphone or tablet as a sonar-unit display. A phone or tablet charger is included, along with an armband phone-carrier for easier viewing. You do not need a cellular signal for full functionality; it works via wifi.