My bomb cast arced high through the May sky, landing solidly in the shallows with an audible thunk. The entire... 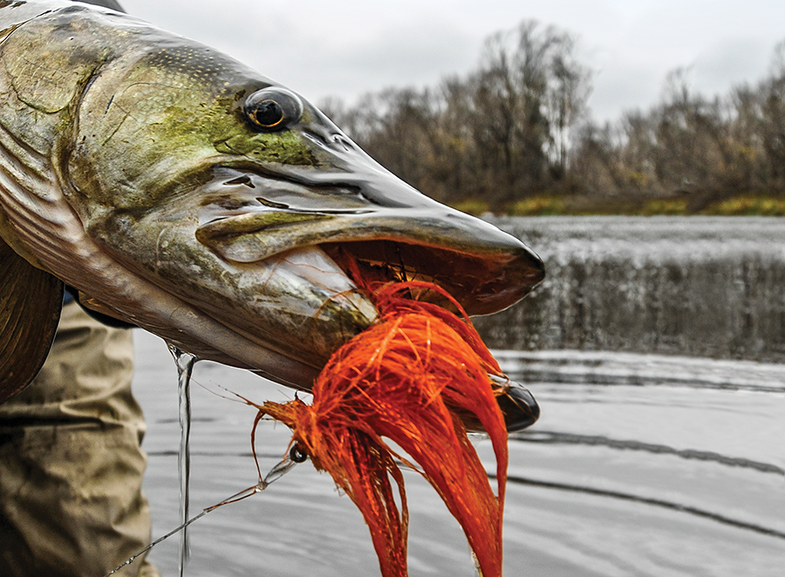 My bomb cast arced high through the May sky, landing solidly in the shallows with an audible thunk. The entire distance from bucktail to boat appeared to be a sand-bottomed shoal, save for a lone dark spot indicating slightly deeper water about 10 reel cranks in. Not what many would think of as an ideal spot for a muskie to live. As the Mepps bridged that gap, an olive-green missile launched from the darkness, smacking the spinner.

My hookset was solid and the battle with the big muskie proved spectacular, with every head shake and gyration plainly visible in the transparent water. Without much room to swim, the fish twice took to the air. The muskie was soon in the net, and it was released.

At first glance, fishing over sandy bottoms for muskies seems to be sheer folly. This is extreme ­shallow-​water fishing—usually 6 feet or less. And because the bottom is somewhat featureless, it’s easy to assume that it is also fishless. But appearances can be deceiving when it comes to muskie habitat. Shallow, sandy areas often hold the warmest water in a lake, and thus attract swarms of baitfish—and muskies.

This happens from just after they spawn all the way until late summer, when the waters begin to cool again. Every muskie angler should work sandy areas into their daily game plan.

Sizing Up the Sand
I target four different sand locations for muskies:

1. Sand Flats
These are nothing more than subtle points or shallow spots extending from the shoreline before giving way to deep water—a beach, for lack of a better term. The larger the flat or point, the better the odds that it will contain additional cover or structure and the greater the chance that muskies will be using it. In clear-­water lakes early in the season, muskies will often lie in the sun on sand flats as they recover from spawning.

2. Sandy Bays
The back ends of bays often feature weed growth separating deeper water from the shallow sanctuary behind. The weeds will provide ambush cover for muskies and act as a barrier that helps insulate the back of the bay from colder main-lake water in late spring to early summer. The weeds at the mouth of the bay attract the most angler attention, but it’s the sand flat behind the weeds that hold the most active muskies.

3. Inside Weed Edges
In many lakes, lush weeds grow in a zone that extends from 3- or 4-foot shallows to the depth where reduced sunlight limits further growth—usually at 6 to 14 feet, depending on water clarity. This outside weed edge is popular with fishermen, but it’s the inside weed edge—the zone from the shoreline out to where the weeds start—that is often overlooked. As with the sand bays, the inside weed-edge zone will be warmed by the sun and shielded from the cooler main-lake waters by the vegetation.

4. Sand Humps
Rising up from the depths, sandy humps are often the least consistent of the sand areas because they’re too deep to be warmed much by the sun. However, if boulders, scattered weeds, or man-made fish cribs exist on such spots, they hold great appeal to muskies.

Working the Sand
In the spring, anglers should beef up the hooks and split rings of lipless, rattling bass-sized crankbaits and rapidly fan-cast sand flats for post-spawn fish. On clear-water lakes, use jigs and reapers to sight-fish for muskies lying in the sun.

In the summer, muskies will scatter along flats, so it’s important to cover water quickly with bucktails and topwaters. If weed growth is thick or the flat is punctuated with reeds or bulrushes, use a streamlined spinnerbait like a Slopmaster.

In this day of more and better-equipped muskie hunters, sandy areas remain overlooked hotspots. Try them this season and you may be in for sudden strikes and spectacular fights in skinny water.

Muskies do not nibble. They swallow ducks and muskrats whole. The fish’s ruthless appetite gives rise to some of the most diverse—and ­coolest-looking—baits ever concocted.

This muskie-­lookalike swimbait was carved by Ryan Goetze of Waconia, Minnesota, and won Best of Show in the Muskie Lure World Championship. His inspiration? A pike he caught last summer that had tooth marks on it. “I thought if I made a muskie-shaped lure, I might catch one.”