How To Catch a Pending World-Record Tautog Like This One

A hallowed benchmark exists for Northeast and Mid-Atlantic anglers when it comes to catching a world-record tautog (aka blackfish). And... 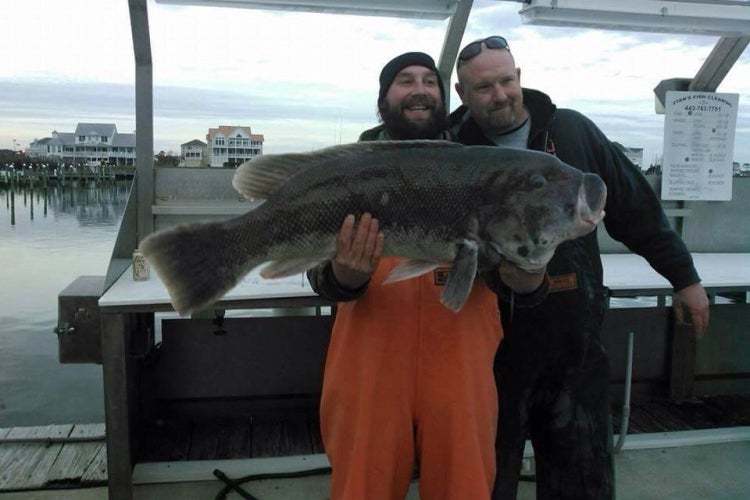 A hallowed benchmark exists for Northeast and Mid-Atlantic anglers when it comes to catching a world-record tautog (aka blackfish). And now it appears the current world record, in place since 1998, has been busted. On January 2, Kenneth Westerfield of Bayside, N.Y., was out pounding wrecks on Captain Kane Bounds’ Fish Bound out of Ocean City, Md., when he buckled down and hauled in a monster whitechinner that pegged the scales down to 28.8 pounds at Sunset Marina in Ocean City, breaking the previous record of 25 pounds, a 3.8 pound difference, which was previously set by Anthony Monica when fishing out of Ocean City, N.J.

Blackfish are slow-growing dinosaurs and any fish over 20 pounds could be well over 50 years old. That alone shows the luck and skill any tog of that caliber has to survive, let alone be caught by hook and line. Any tautog over the 10-pound mark is considered a lifetime fish, and many togheads never see that mark broken, with 5 to 8-pound blackfish considered exceptionally large. The 2 to 5 pounders are average size, often caught out on wrecks and reef sites. Putting those weights in perspective, you can imagine the buzz generated when people along the coast hear of a 15 pounder, an 18 pounder even a 20-pound tog. But a 28.8-pound bulldog completely shatters expectations and this catch has sent a wave through the angling community in the Northeast and Mid-Atlantic.

Large trophy tog over the 10-pound mark demand different tactics. First and foremost, a stout stick with moderate give in the tip section is needed, such as an 8-foot conventional rod rated for 30 to 50-pound test, matched with a high speed retrieve reel, like a Shimano Torium 20, spooled with 50-pound braided line. Many togheads opt for a 10-foot top shot of 50-pound monofilament leader Albright knotted to the braided line to allow a tiny amount of give when a tog bulldogs down on an arm breaking run, to insure the violent surges of the blackfish doesn’t pull the hook through the lips. Hooks for big tog can be super sharp 5/0 to 7/0 Gamakatsu Octopus hooks, snelled on 50-pound monofilament. 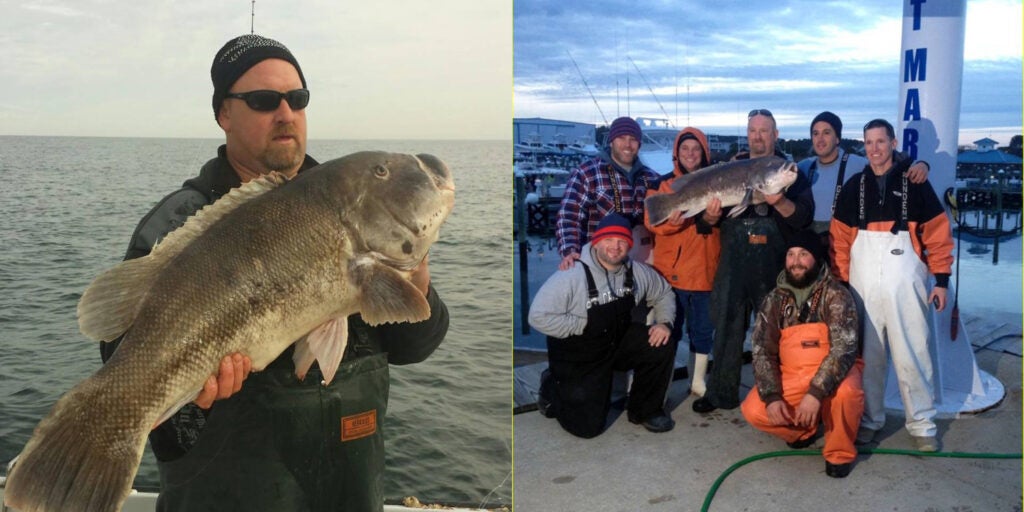 Dialing the hookset into tog only comes with years of practice as they are shifty and quick biters, but once hooked, the true battle is in turning their head upward and muscling them up and out of the wreck before they can propel down and lodge themselves into the structure. A super tight drag and quick, speedy reeling with your rod tip lifted high will hopefully get the trophy tog out of its lair, enough that you are clear of the jagged structure. The battle from then on will be dogged and arm wrenching as the fish will continually try to muscle itself downward. Once out of the structure, loosen the drag a tiny hair to prevent a snap off, and slowly and steadily reel in the fish to the surface, slipping the net underneath to boat the fish.

This pending world record, if approved, may sit on its pedestal for a long time as blackfish of this age and caliber don’t come around too often.