How To Feel Your Way Toward Successful Crappie Fishing

Mark Williams and Doug Cherry love their vertical crappie jigging, but they’re not fond of the fish’s frustrating tendency for... 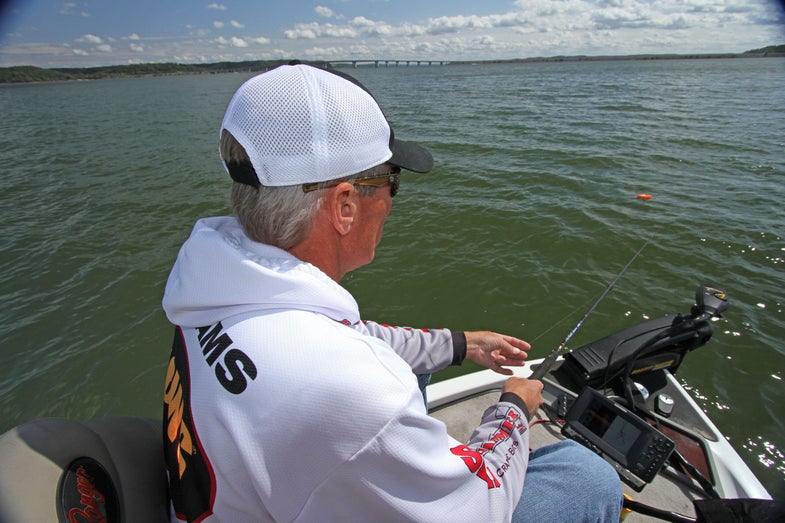 Mark Williams and Doug Cherry love their vertical crappie jigging, but they’re not fond of the fish’s frustrating tendency for light—often nearly imperceptible—bites. The vexation is bad enough on a calm day, but add a decent wind and it becomes increasingly challenging to detect a crappie strike in time to set the hook.

For Strike King pros Williams and Cherry, it’s all about constant line contact.

Williams notes that strike detection becomes increasingly important when windy conditions challenge his ability to hold the boat in front of a brush pile and keep his baits in the strike zone.

“When you’re vertical jigging, you have to hold your rod tip close to the water and keep it as steady as possible,” he said. “Crappie bite so lightly that when the wind is blowing your rod tip around, you’ll miss a lot of those subtle bites.”

The solution, Williams explains, is lightly holding the line to detect any tug, twitch, or take. This delicate connection also enables the angler to impart jigging action without raising and lowering the rod tip. That’s a key point, Cherry said, as jigging with the rod tip usually becomes an exaggerated and self-defeating effort in windy conditions.

While the pros agree on this principle, their individual styles demonstrate the technique’s versatility.

Williams positions his hand under the line, palm up, and grips it with his thumb and middle finger. Extending his index finger, he makes short strokes on the line to move the jig up and down.

Cherry opts for what he calls the “wedding ring” method: He grips his line from above (palm down) with his thumb, index, and middle fingers, and lightly rubs the line with his ring finger.

These are two different takes on the same principle, but Williams and Cherry say these techniques ultimately help them miss fewer bites.