How to Snare Kingfish Baits with Sabikis

The nights are turning cooler and the days are becoming milder. Fall is in the air, and that means coastal... 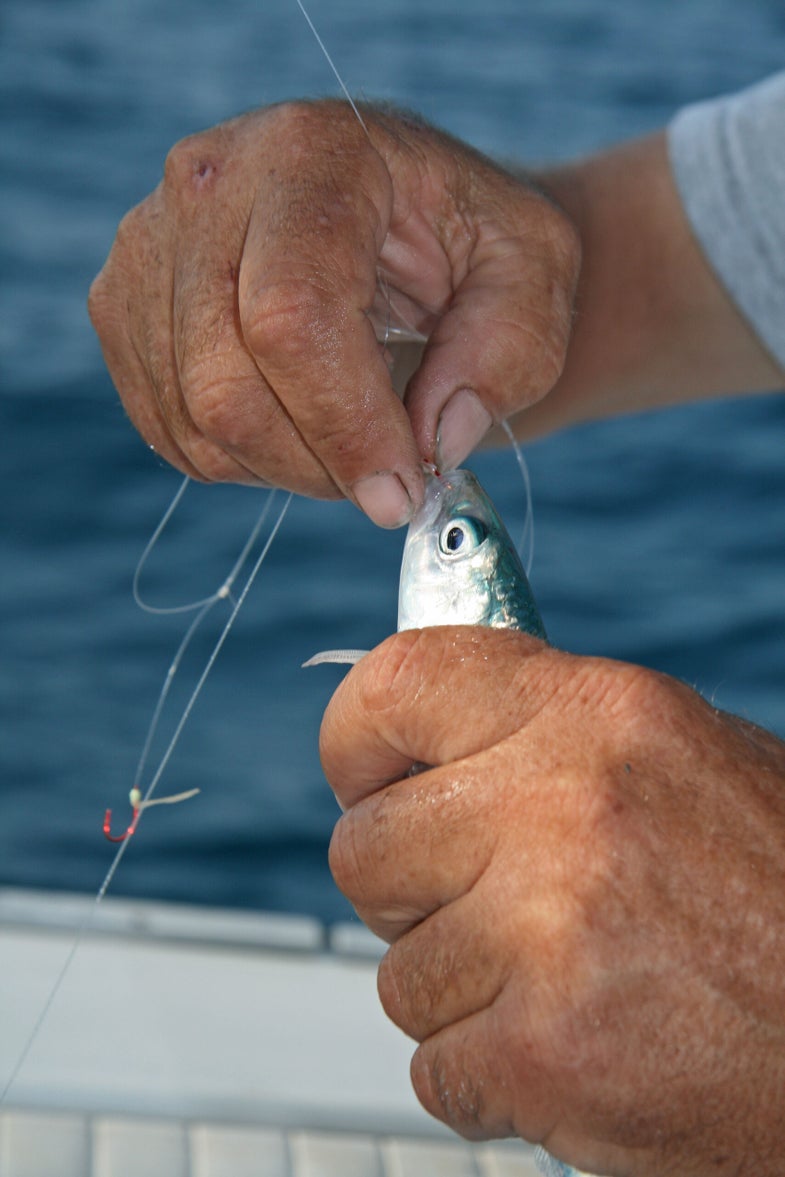 The nights are turning cooler and the days are becoming milder. Fall is in the air, and that means coastal saltwater species will start gorging on the baitfish schools that will soon begin thinning out with winter’s eventual approach. Anglers in the know will take full advantage of this autumnal treasure trove of pleasant conditions and feeding fish by catching and deploying live baitfish.

One of my favorite uses for the scaled sardines (“whitebait”), threadfin herring (“greenbacks”) and Spanish sardines common throughout much of the Gulf of Mexico is slow trolling for king mackerel. Known also as kingfish, these fierce biting machines attack bait schools with reckless abandon. But they can be remarkably wary of trolled baits.

This means the baits must look as natural and lively as possible.

Baits caught in cast nets can end up stressed and less productive, so picky kingfish anglers like to use sabiki rigs. Essentially a string of gold or red hooks dressed with various arrays of quills, Mylar, and glow beads; sabikis resemble the tiny crustaceans and larvae upon which baitfish feed.

Anchor one of these rigs with a lead weight, drop it to the bottom, and jiggle it to shake those dressed hooks. Baitfish snap at the impostors and are instantly snared with little more than a sore lip. Definitely a slower process than the mass production cast net route, sabikis generally yield more active kingfish baits.

Note: Some baitfish like menhaden hardly ever bite sabikis, so cast netting is your only option. However, for the many baits that readily snap at these shiny rigs, here’s a few tips for optimal performance.

When removing a sabiki from its package, tie your main line to the appropriate end first, add your weight next and then pull the rig from its cardboard holder one branch at a time. Remove the whole thing before attaching line and weight, and you’ll experience the definition of utter chaos. (Think: “herding cats.”)

Match your weight size to depth and current speed. In the coastal zone where most king baits are gathered, a 1- to 2-ounce weight will suffice. Overdo it and your rig will fall too fast for suspended baitfish to catch it.

When targeting bait schools dimpling or “raining” at the surface, resist the urge to toss a sabiki rig dead center. You’re more likely to scatter the baits that way. Rather, work the edges or cast beyond the bait school and let your sabiki swing like a pendulum through the mass.

Lastly, feeding competition runs high when thousands of baitfish gather en masse. Make this work to your advantage by “loading up.” As you work your sabiki through the water column, pause the rig as soon as you feel a baitfish snare itself on a hook. Typically, several more will follow within seconds. You’ll fill the well more quickly by reeling up several baits per drop.