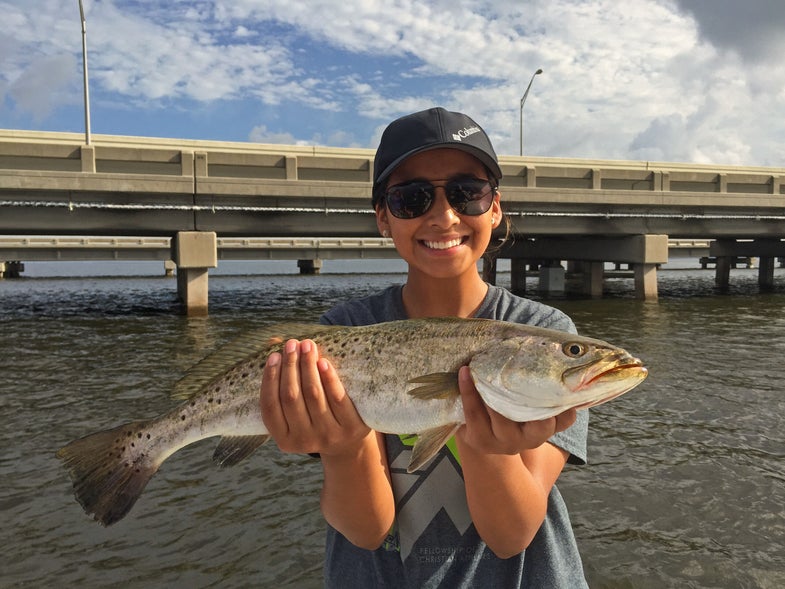 If you have a daughter, you know that “Dad, can you (fill in the blank)?” generally gets an immediate yes. In this instance, a practical need buttressed my desire to help.

We were fishing the south side of Tampa Bay’s Gandy Bridge for mangrove snapper. While the incoming tide created a strong feeding period, the threat of snagging our split shot rigs on the bridge pilings and surrounding debris loomed large.

With three other anglers staggered along the edge of Capt. Richard Seward’s 24-foot skiff, spacing out our lines was imperative for avoiding tangles.

From her bow position, Gabby had a fairly simple shot at the gap between two pilings. However, I advised her to cast to the piling off her right side. Here, she’d have a better shot at tempting any fish by utilizing the structure as a current break.

Hitting that 45-degree angle with an awkward bottom rig (weight and bait about two feet apart) was no easy task.

Experience level is not the point here, but I’ve made that shot a few times, so I did my best to put Gabby in the ballpark. I fired her rig just past the piling and handed her the rod with instructions to slowly work the bait into the sweet spot.

Two minutes later I turn around and see my daughter bent up and putting the heat on a big fish. Capt. Richard grabbed the net and scooped up a fat speckled trout that taped 19 ½ inches.

Typically, we find those big trout more consistently during spring and fall, although there’s always a good number scattered throughout Central Florida waters during summer.

Bridges may not be a trout angler’s most common target, but three decades in this region have shown me their bankable attraction during the dog days.

I’ve caught bigger trout, but that matters not. I’ve photographed bigger trout. Again, who cares? I’ve never been happier with a catch or a photo. I helped when asked, but Gabby did the rest on her own. Pretty cool.