Early January brought a severe cold snap that chilled even Florida’s typically balmy digs. Such shots of serious cold will... 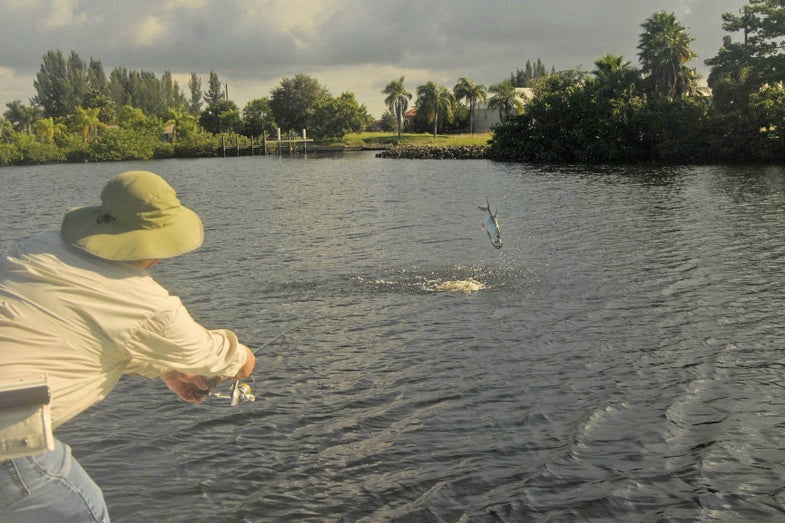 Early January brought a severe cold snap that chilled even Florida’s typically balmy digs. Such shots of serious cold will shock the shallow flats game, so a lot of anglers are now turning to the coastal rivers and creeks for their inshore action.

Shelter from the wind, warmer habitat, stability – these are the attractive attributes that attract the snook, redfish, flounder, jacks, and mangrove snapper that are commonly caught a rod length from a largemouth bass.

That’s a fun mix, no doubt, but Sarasota’s Capt. Rick Grassett knows that any cast with a jig, fly, or DOA Shrimp could find his line suddenly tightening with a silver cyclone that’ll heat up even the coldest day.

Tarpon, specifically the juveniles of about 10-30 pounds also seek more comfortable water this time of year. And while they’re usually one of the pickier species roaming the brackish to fresh waters, once they decide to bite, the show is worth the wait.

Jump, jump, jump, long sprint, jump, sprint, jump some more–that’s the standard deal. You’ll get some to the boat; most will throw the hook from their bony jaws. Either way, it’s a straight-up day-maker.

“After the first couple of strong cold fronts in November they seem to disappear from the Charlotte Harbor canals that I normally fish,” Grassett explains. “I think they head further up rivers and creeks where you can catch them in the winter.

“Anglers targeting snook in rivers and creeks in winter catch a few. However they don’t roll on the surface much due to higher oxygen content in the cool water, so it’s blind casting as opposed to sight casting to rolling fish in late summer and fall.”

When seeking tarpon, Grassett likes the DOA TerrorEyz, a lead head baitfish imitator he can cast a long distance and hop through the water column. Fly fishing’s also a blast and Grassett does well with fast sinking fly lines (300 or 350-grain Orvis Depth Charge) and Clouser flies.

Small jigs with shad or curl tails also produce bites on the medium-action spinning gear common to this game. Whatever you throw, plan on making a lot of casts to earn a baby tarpon bite. But when it happens, the thrill will fuel the next round of effort.