New Jersey Blackfish: How to Catch the Next World Record Tautog

The long standing New Jersey state and world record blackfish of 25 pounds even was hauled up by Anthony Monica... 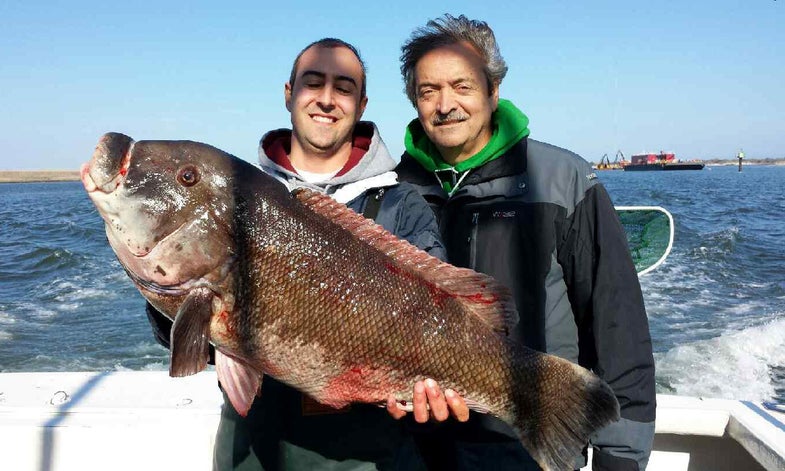 Now, Monica’s NJ state record will fall as another monster tog has hit the scales, edging so close to the world record title again. Frank LaMorte, fishing with Captain Tom Daffin of the Fishin’ Fever IV, out of Cape May, NJ, hoisted a 25.37-pound blackfish onto the scale at Jim’s Bait and Tackle in Cape May.

Around 2 p.m. on April 17, Daffin had positioned his charter over a shipwreck in 130 feet of water off south Jersey, bouncing around white legger crabs hooked on 5/0 Octopus hooks. While the charter had already put an incredible catch of ten monster tog (seven of which were in the 11.5 to 18 pound range), Daffin noted that LaMorte’s bent rod had a behemoth on it.

“[LaMorte] was trying to get this fish off the bottom with 65-pound braided line, and after three sustained runs back to the bottom, he was able to turn him skyward,” Daffin said. “I don’t think he knew what he had on, but I knew it was something big time.”

When the fish finally surfaced, they all knew it was a legendary tog. “I was walking around in circles in a daze after we netted it,” Daffin said. “There’s no two ways about it, we’ve got the NJ record, and I know the world record is going to be broken again soon.”

During the last four years in New Jersey, Delaware, and Maryland waters, a solid handful of tautog in the 20-pound plus range have been hitting decks, suggesting that another new world record might be right around the corner.

Catch the Next World Record

To target those monster dinosaurs, winter and early spring months are prime time as the tog stage in depths of 95 to 130 feet. Secret wrecks and non-pressured structures will hold the largest fish, as blackfish tend to spend a good portion of their lives on a specific wreck, allowing them time to feed and grow without interference. Trophy tog want to eat large meals, such as whole white legger crabs which can be 5 inches in diameter alone, hooked on a “snafu” type two hook rig with size 6/0 Octopus hooks.

When behemoth blackfish feed, you’ll actually feel them pick up the sinker as they move off with the bait. You need a solid hookset, combined with a tight drag to muscle them up off the wreck before they run into a crag and snap you off. Select a heavy, stout rod with some moderate flex action and match it with a high-speed retrieve reel spooled with 65-pound braided line and a 10 foot top shot of 60-pound monofilament leader. That’ll fit the bill as your weapon. Will the world record be broken again soon? We shall see—go give it a shot.