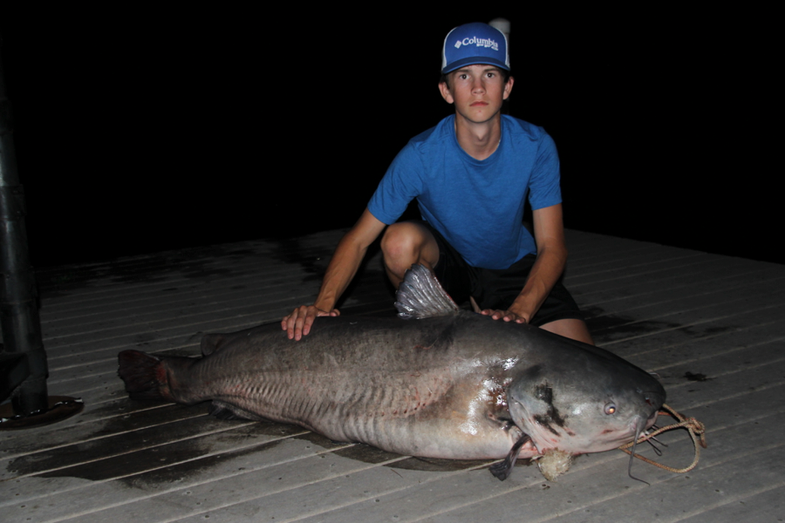 The night of Saturday, June 11, 15-year-old Landon Evans of Benson, N.C. caught a 117.5-pound blue catfish from his family’s dock on Lake Gaston. His fish will likely be certified for three different blue catfish records: the North Carolina record, the International Game Fish Association (IGFA) world record for a junior angler, and the IGFA world record for the 30-pound line class.

Three records for one fish may sound like quite the bargain, but when you consider Landon’s precarious fight with the blue cat, followed by his two-day struggle to bring it to a certified scale, you can see he earned every one.

That night, Landon was fishing two rods, one of them a midsize outfit suited for bass, and the other a heavier catfish setup. He baited his 7/0 circle hook with a hunk of gizzard shad he had caught with a cast net. Since he had only one rod holder, he wedged the lighter rod into a metal, spiral staircase on the dock, then lay down in a hammock to wait for a bite.

Within 10 minutes, a rattling from the stairs signaled to Landon that a fish had struck on his lighter rod.

“I had to jump up and grab the rod real quick before he pulled it out,” Landon said.

Landon realized as soon as he hooked the fish that he “had something bigger than anything [he] had ever caught before.” He decided to call his mother, Heather, for assistance, fighting the fish with one hand while he dialed with the other. However, when after 20 minutes of fighting the fish it came into view, he realized he would need even more backup.

“When it surfaced the first time, the head, and the whole body, it came up in slow motion for me,” Landon said. “His head, I mean it looked like the head of a shovel, it was about that big.”

Landon’s father, Brandon, also joined him at the dock, and when the fish finally surfaced again, Brandon put a net over the fish’s head, while Heather put a second net over its tail. Landon’s rod snapped in half, but his line remained attached.

“Dad grabbed the rings of the nets, and I grabbed the handles, and Mama grabbed him around the waist,” said Landon, “and we all pulled on him, and it was about all we could do to get him on the dock.”

Landon weighed his catch on a handheld digital scale, and though he couldn’t lift all of it off the ground, he got a reading of 106 pounds—a pound larger than Zakk Royce’s state record blue cat, caught in 2015. He and his family brought the catfish home, placed it in a kiddie pool with aerators, and tended it until finally going to bed at 3 a.m. However, when they awoke the next morning, it had expired.

Landon called Holly Grove Marina, in Bracey, telling them he had a potential record blue catfish to weigh.

“They kinda laughed at me,” Landon said.

When he arrived with the fish, its tail hanging out of a 120-quart cooler, they became less skeptical. It tipped the scales at 120 pounds—only three pounds lighter than Landon himself. However, the marina’s spring scale was not certified, and thus not valid for a state record.

Landon’s father managed to get a hold of Zakk Royce on the phone to ask him where he had weighed his own record catfish, and he recommended Ace Hardware. However, Ace turned Landon and his family away.

“From there we had no clue what to do, because we couldn’t find another scale,” said Landon. They called other marinas in the area, until finally Stonehouse Marina offered to weigh the fish on their certified scale.

They drove out to Stonehouse and weighed the fish, only to find out that the scale was expired.

Landon also pointed out that there is a second requirement for certifying a state record. “The whole time,” he said, “we were trying to search for a biologist,” who must be present to confirm the fish’s species and witness its weight. By the end of Sunday, the Evans family had fulfilled neither requirement.

Monday morning, Brandon managed to get in touch with a biologist, who offered to meet them at a certified scale. He then asked the biologist if he knew where they could find one.

“And he said we could meet at Ace,” said Landon.

This time, Ace allowed them to weigh the fish, and the biologist signed off on the record. The North Carolina Wildlife Resources Commission will likely enter the record into the books within the next few days. The IGFA will likely certify Landon’s two world records once they have examined his hook, his rig, and a sample of his line.

Landon says the fish is now “sitting down there in the barn, in a freezer,” but that he plans to have a plaster remake made, and hopes Cabela’s will display it.

“After I finish with all that,” said Landon, “I’m gonna give it back to the biologist. He wanted to do some tests on the ear stones to see how old he was.”

In the meantime, Landon’s family is about to make another visit to their property by the lake, and he is eager to get back on the water.