On Point for Suspending Spotted Bass 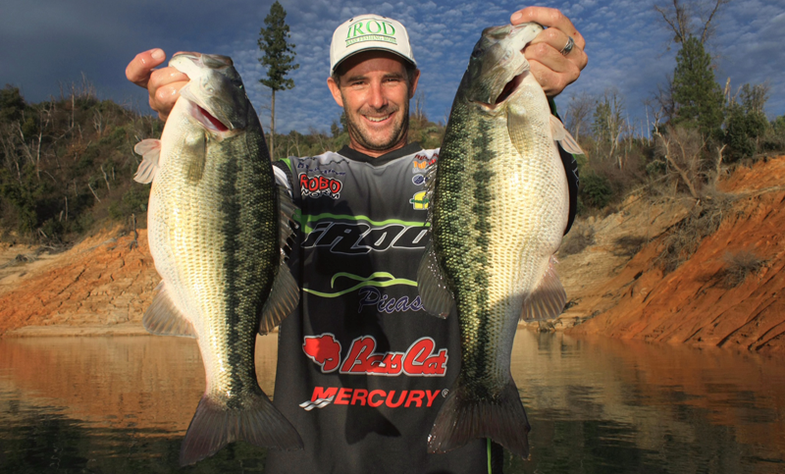 When California bass pro Matt Newman looks for a big, impressive catch he knows just the spot. A bit of a double entendre there, because Newman has a bead on not only the right locations for a good string stretching, but also for a truly impressive species – the spotted bass.

Sure, California’s northern reservoirs hold plenty of big Florida-strain largemouth bass, but in recent years, the rest of the world has learned the once guarded secret of the Golden State’s phenomenal spot fisheries. California’s spots came from Alabama’s Lewis Smith Lake in the 70’s and those thriving today grow fat on the rainbow trout and kokanee salmon abounding in Western waters.

Keith Bryan caught a new world record spot of 10.48 pounds was caught February 22 on New Melones Lake. They don’t all get that big, but Newman knows the right tactics applied at the right locations can easily yield a 5- to 6-pounder, with something closer to the record remaining an ever-present possibility.

A renowned swimbait guru and president of iRod, Newman targets long main lake points where big spots like to suspend 20-30 feet down in depths of 60-80 feet. He prefers big baits like the Huddleston 68, River2Sea S-Waver, Triple Trout or Osprey are best; but it’s also a matter of technique.

“For spots I will approach the tip head on and slowly work in toward the point,” Newman said. “I’ll make sure I get a few good casts down each side of the point because I have found big spots will use the first 50-100 feet of the sides of a point from the tip.”

Newman said he likes to mix it up so the spots don’t get wise to his ways.

“Another approach is throwing over the point but starting deep and working the boat shallower with each cast,” he said. “A sinking or slow-sink bait will work depending on their mood that day. Most of the big spots in eat swimbaits out in open water, but they’ll chase them shallow.”

The deal with this strategy is to make lots of casts with a hefty bait that typically weeds out the smaller fish. It’s definitely a workout, but at any given moment, your next cast could tempt a trophy spotted bass.