Jim Moynagh of Minnesota has competed on the FLW Tour for 18 seasons, amassing three wins, 21 top-10 finishes, and... 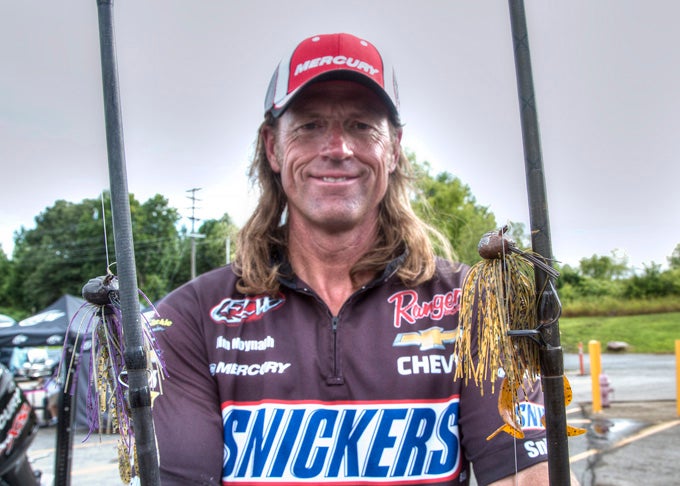 Jim Moynagh of Minnesota has competed on the FLW Tour for 18 seasons, amassing three wins, 21 top-10 finishes, and more than $1.3 million. Moynagh grew up in the rock-strewn Land of 10,000 Lakes, and his favorite summer lure shouldn’t be a surprise to anyone.

The Lure
A 3/4-ounce All-Terrain Tackle Rock Jig, which is a football jig, with a brown, watermelon, or dark green pumpkin skirt and matching twin-tail or crawdad trailer. With those three colors, he pretty much has it covered anywhere.

The Tackle
Moynagh says he most commonly uses a 12-pound fluorocarbon line combined with a 7- or 7 1/2-foot heavy-action rod and baitcasting reel.

Where to Fish It
This time of year a lot of the best fishing is offshore, but the depth is relative to the lake you’re on. You’re looking for offshore structure with rock, gravel, sand, or mussel beds though. On some lakes with a lot of suspended sediment or algae blooms and low water clarity, you’ll be fishing 5 to 10 feet. In a really clear lake, you’ll be deeper than that.

“To fish a football jig, you need hard bottom of some kind,” Moynagh said. “If you run into a soft or silty bottom it’s just going to get mired in the silt and the fish won’t see it. It doesn’t fish through the grass either, so it’s mainly a hard-bottom bait.

How to Fish It
Cast it to the area where you think the fish are, let it sink to the bottom, and then slowly drag it along the bottom so the bait maintains contact with the bottom the whole way through. What’s nice about a football jig is it transmits the bottom better than other types of jigs, so you can feel it and get dialed in on exactly what’s there: gnarly rock, stumps, mussels, gravel or sand, a transition from hard to soft.

Why It Works
“I like it because I can feel exactly what’s happening on the bottom. Plus, it’s hard to get a crankbait down to 20-plus depth or deeper. The football jig is just one compact unit to throw. Anytime you’re fishing offshore, the Rock Jig is my number one go-to, but I will have a rod with a crankbait and Carolina-rig. You’re searching for offshore fish and not every fish in the school will hit one certain bait. You may have to put one down and then throw the Carolina rig or crankbait, or change colors.”