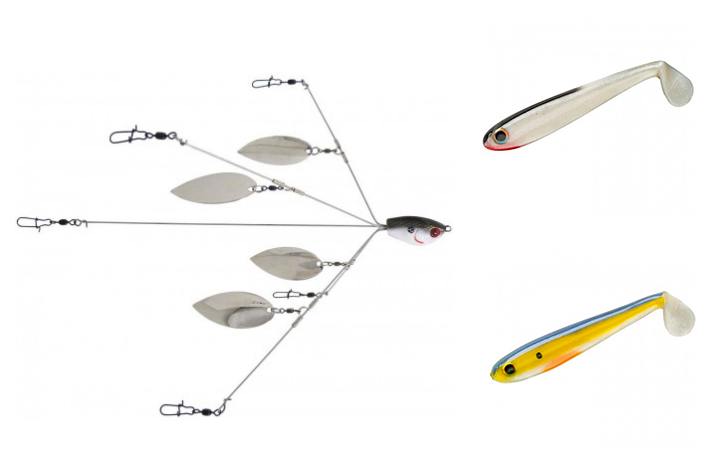 Every autumn for the last few years on the Tennessee River thoughts have turned to two things: deer season and catching monster large or smallmouth bass with spreader-style rigs outfitted with swimbaits.

Love ’em or hate ’em, the rigs are highly effective and a ton of fun. Veteran guide Jimmy Mason ties on the Yumbrella Flash Mob with Yum Money Minnows to do battle on Pickwick, Wilson, Wheeler and Guntersville lakes on the north Alabama River.

“The Flash Mob and umbrella rig setups are coming back in right now,” Mason said. ‘The water temperature is about 62 to 58 degrees and continuing to cool down, which means the fish are transitioning from the flats to deeper channels. They’re still using both when the water warms during the day but they’re moving closer to those deeper areas for winter.”

Mason throws the Flash Mob on a 7-foot-11 Lew’s Custom Speed Stick Magnum Casting rod with a Lew’s Speed Spool Tournament Pro 6.4:1 reel and 65-pound test Vicious braid. He switches to 20-pound Vicious fluorocarbon on clear water lakes such as Lanier or Smith, where he believes it makes a difference in bites.

“With the water color we have on the Tennessee River, I’ve never seen it make a difference in regard to bites with the braided line,” he said. “But I certainly think it does in very clear water. The other thing is to vary your retrieve. Try it steady, a stop-and-go, let it fall… you’ll definitely have to figure out how they want it.”

What they want is the cluster of 3.5-inch Yum Money Minnows on the outside of the Yumbrella rig and the 5-inch Money Minnow on the center line. Mason throws Foxy Shad or Tennessee Shad. Both shine on the Tennessee River.

“All the Yumbrella wires are the same length but the center one has the illusion of being back a little farther,’ he said. “Plus, having that 5-inch Money Minnow in the center adds to that. And it seems to be the one the bass target. This bite will get stronger for the next month and continue through March.”