A day or two of late winter sunshine can put stream smallmouth bass in a feeding mood. Not much of... 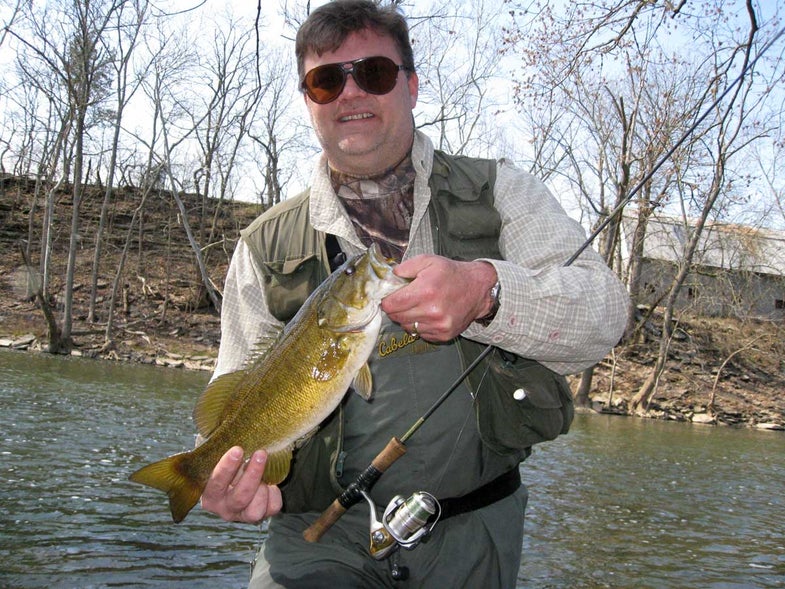 A day or two of late winter sunshine can put stream smallmouth bass in a feeding mood.

Not much of a feeding mood. But enough.

“You’re fishing for just a few bites and you’re going to have to soldier through many bite-free casts,” says Lee McClellan, a dedicated stream angler who targets smallmouth bass year round across his native Kentucky along with West Virginia, Arkansas and Missouri. “But the ones that bite are usually large females.”

The water is cold. Action will likely anything but fast and furious. But
the late winter smallie that takes your bait might be your biggest stream bass of the year.

Five tips from a smallmouth fanatic.

1. Pick your spot carefully
“Everyone fishes the deep holes,” McClellan says. “And you should. The long, deep holes with cover offer sanctuary in winter for smallmouth. But the transition water at the head and at the tail out are the spots to pound in late winter. The fish in these spots are feeding fish. The deep pocket on the outside bend before a drop is also a fantastic winter spot.”

2. Use the right bait
McClellan usually carries a few 3-inch Senkos and 4-inch finesse worms in black or watermelon along with a handful of Charlie Brewer Whirly Bees and a couple of bucktail jigs. But his money bait is a 1/8-ounce hair jig in purple; no trailer. “Fish it slowly on the bottom in the transition zones,” he said. “And don’t be afraid to throw it near an undercut bank. It’s my favorite lure for late winter and early spring.”

3. Slow down
“A crawling retrieve across the bottom is what I employ most of the time,” he said. “They often hit the jig when you pop it off a rock.”

4. Be light and fast on the rod
“Bites can be excruciatingly light,” McClellan added. “I like a light power, fast rod. You’ll need to quickly set the hook. If you feel a mushy feeling, set the hook.”

5. Snags and hang ups are a part of winter
“I prefer 4-pound test line in summer,” McClellan concluded. “But in this situation you are fishing slowly and getting hung up fairly often. Go with a 6-pound fluorocarbon coated co-polymer in low-vis green or clear.”