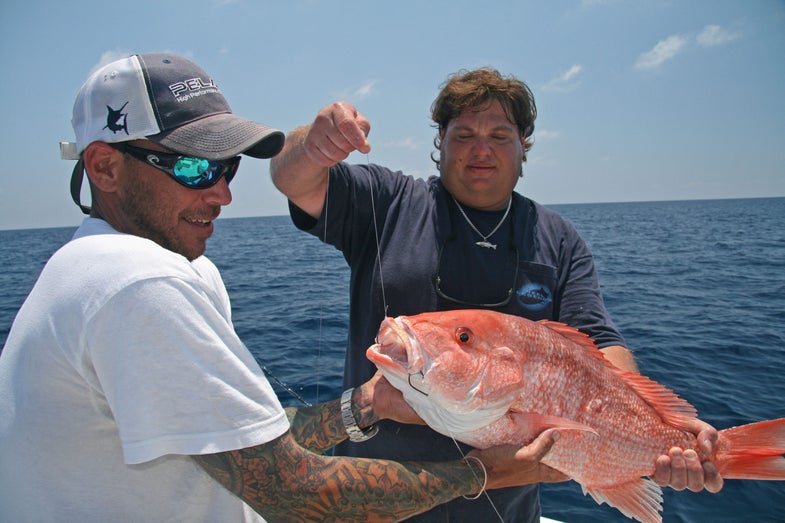 Conservation goals—specifically, minimizing release mortality—have guided federal fisheries managers to require the use of non-stainless steel circle hooks for anglers targeting reef fish species with natural baits. But occasionally we see an unexpected benefit from these hooks. They can roll forward on the bite and firmly snare the fish in the front section of the mouth for easy removal and prompt release of any fish outside the legal size, season, and/or bag limits.

I witnessed just such an example during a bottom-fishing excursion in the Gulf of Mexico.

With six guys fishing from even the most spacious cockpit, tangled lines are nearly guaranteed. Upon reaching his spot southwest of John’s Pass, Capt. Ryan Wagner straightened several crossings, but he was pleasantly surprised when his services were not needed by Gavin Napoli and Matt Szulag.

Both had deployed whole frozen sardines on 4/0 conventional outfits in about 105 feet of water. Szulag’s line tightened first, and Napoli’s followed seconds later. An active bite had already yielded multiple hookups, so neither angler found their nearly simultaneous bites unusual.

But as Szulag and Napoli watched their taught lines rising ever closer, they decided the lines were tangled after all. Then a plump red snapper surfaced. The greedy fish had two circle hooks planted firmly inside its mouth. No snagging, no phony placements—just a case of one gluttonous fish gobbling two baits before either angler could react.

Chances are good that two J hooks would’ve also stuck this fish, but given a snapper’s propensity for quickly gulping its meals, it’s likely that the fist bait might have already reached the fish’s gullet during the short time between bites. We kept this one because snapper season was open, but an out-of-season fish would’ve been released with little more than a doubly sore jaw and a bruised ego.