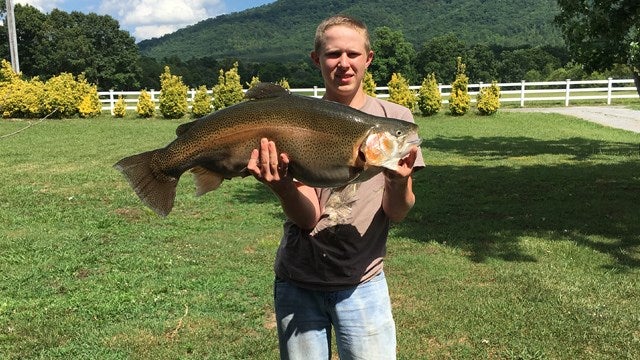 On Friday, June 17, 15-year-old John Morgan of Benton, Tennessee, caught an 18-pound, 8-ounce rainbow trout from a farm pond in Polk County. It surpassed the previous state record of 16 pounds, 15 ounces set in 2002.

“I just love being outside, hunting and fishing,” Morgan told the Tennessee Wildlife Resources Agency. Morgan fishes several times a week, usually on the Hiwassee River, but he visited the farm pond as a favor to a friend of his grandfather, who wanted a snapping turtle removed from his pond. Morgan caught the turtle after about 45 minutes, but he decided to fish for another ten minutes before leaving.

It was then that he hooked the record-breaking trout, which fought him for 20 minutes before he finally brought it to shore. It measured 32 inches long, and was 22 and a quarter inches in girth.

Morgan took his fish to a certified scale to be weighed, and to a taxidermist to be mounted. The TWRA has since confirmed it as the new state record.