Tips for Bass Bugging Without a Fly Rod, Part 1

It’s not often you get to a private lesson from one of the greats, so when Tommy Biffle spoke, you... 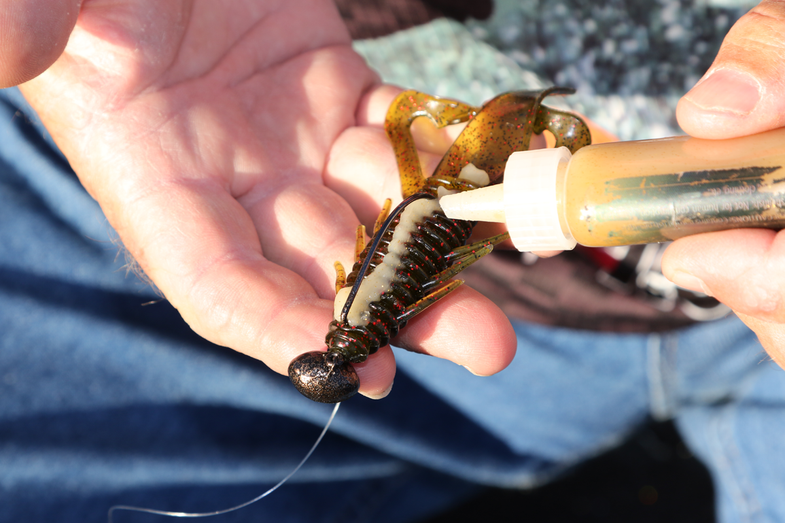 It’s not often you get to a private lesson from one of the greats, so when Tommy Biffle spoke, you can bet I soaked up every word. Widely regarded as one of bass fishing’s top shallow-water fishermen, the Bassmaster Elite Series pro from Oklahoma recently spent some time with me on Fort Gibson Lake, not far from his hometown of Wagoner.

Wisdom nuggets fell freely; so much so that I’ll break this into a two-parter.

Biffle spends a lot of time behind his signature creation: The Gene Larew Biffle Bug. An innovative creature bait with a solid head for firm hook placement; a hollow, oval-shaped body cavity that grips a rattle through natural compression; and lots of action from the tiny appendages, kicking legs and a cupped tail; the Biffle Bug fits several soft plastic scenarios.

Day in and day out, the bait’s namesake prefers rumbling the bait across rocky bottom on the Biffle Hardhead – a swinging football head he also helped design.

Now, 90 minutes is barely enough time to scratch the surface on most topics, but Biffle’s a man of few words; so each statement dripped with knowledge and insight born of vast experience.

Here are a few that we can apply to similar rigs in this football head/creature bait setup:

Making Scents of It All
Larew makes a scented attractant called Biffle Bug Juice for this and any other plastic anglers may use. Naturally, Biffle’s a believer and he has a system for quick and efficient application.

First, he squirts a generous dose of the scented goo into the bait’s body cavity. Next, he lays another shot along the ribbed exterior and uses the bottle’s applicator nozzle to rub it all along those ridges for maximum adherence.

Biffle could end there, but he’d need to find a towel or tissue with which to wipe the nozzle clean before returning the cap. That is, unless he had a better solution — like wiping the excess Biffle Bug Juice on the bait’s broad tail and kicking legs.

Cleaning his applicator tip, while further spreading the scent—that’s a practicality born from years of doin’.

Biffle’s lessons didn’t end there. Next time around, we’ll share his thoughts on habitat and presentation.