Northeast The best thing to do after a big party is go fishing. After the inauguration, anglers in Washington will... 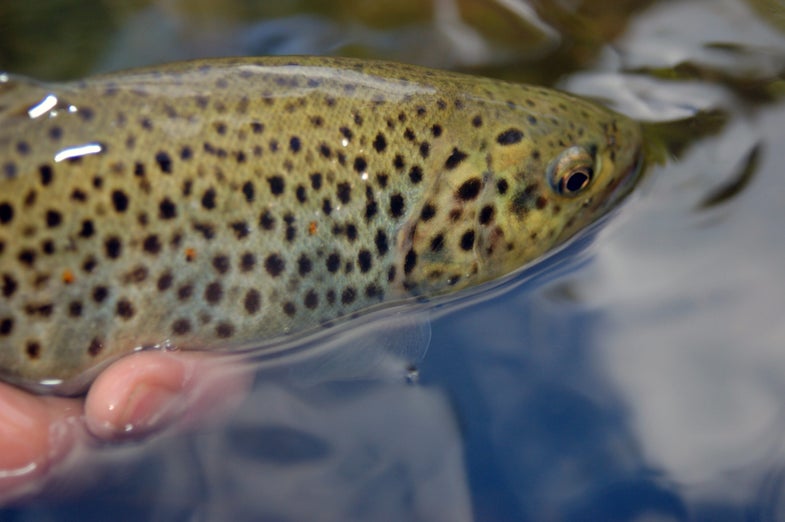 The best thing to do after a big party is go fishing. After the inauguration, anglers in Washington will probably be looking to wet a line this weekend and they need look no further than the Heritage Waterways in South Eastern, Pennsylvania. Griz at Urban Angler in Arlington told us that the best bet is to head to the warm spring-fed creeks around Boiling Springs, PA. The water coming out of the ground stays at 52 to 54 degrees all winter and the native trout gather to escape the cold. Griz recommends newbies fish Yellow Breeches creek. “It’s a good place to cut your teeth,” he says, explaining that the creek is close to the car and close to town.

He suggests that anglers park at Yellow Breeches Park and fish with a pheasant tail nymph or green weenie on a 4 to 5 wt. rod. “The cool thing about this part of the creek is you can fish it with conventional tackle, too,” he says. For more of a challenge, Griz recommends anglers heading out to Spring Creek and fishing for big brown trout. “Get out and shake off the cabin fever,” he urges anglers.

Anglers living in Columbus, Georgia are lucky to have the Congaree River cutting through the center of town. Jake Mitchum at The Tackle Shop on Meeting Street is only a short walk from the river and the fish. “You can fish anywhere on the River Walk that runs through town,” he told us. Jake says that crappie and shellcrackers are available to guys soaking nightcrawlers or blue worms with No. 4 or No. 6 hooks. He told us that folks heading up to Lake Murray are finding better action on panfish while catfish are taking cut bait fished on the bottom. Jake suggests looking for crappies on any of the points that are in 6 to 8 feet of water. Anglers fishing from the bank of the lake have the best shot of landing a catfish up to 30 pounds.

After leading the free world for eight years, George Bush is probably anxious to go fishing. Luckily, the bass bite has been pretty good around Crawford, Texas. James McBride at Waco Bait and Tackle told us that the best action has been on Lake Whitney. He suggests working crankbaits and jigs slowly around rocks and through downed timber. James tells anglers to switch crankbait styles and work different water levels they locate feeding fish. “The water level is low,” James told us, “but you can still launch a boat above the dam.”

While the new President settles into the White House he’s missing some good fishing back home in Chicago. Randy Filas at Henry’s Sport Shop reported that perch are biting at Burnham Harbor on the Lakefront. Anglers jigging small minnows and spikes through the ice are scoring good catches of fat perch. “Start jigging the bottom then bring the bait up until you locate the level where the fish are feeding,” Randy tells us. Brown trout are active on Montrose and Bellmont. Randy recommends fishing golden roaches on tip ups. One of the best locations to target browns is the powerplant on the State Line. Wolf Lake is hosting walleye and bass on its Illinois shore and big pike near the island on the Indiana side of the water.

The Pacific Northwest is a great place to escape the winter doldrums and do some fishing. Al Dalrymple at Outdoor Emporium reports that the steelhead run is still on at the Snoqualmie River. Al told us that anglers fishing Powerbaits or egg clusters on a Carolina rig with ¼ ounce eggsinker and No. 8 worm hook are connecting with keeper steelhead from the boats and the bank. Crews heading up to Rufus Woods are catching triploid rainbows with Powerbait worms on 1/8 ounce jigs or under floats. He suggests fishing around the Chief Joseph Dam. Al also had reports of big blackmouth being pulled from Hat Island and Saratoga Pass. “Fish a Coho Killer close to the bottom,” he suggests.