The Cost of Ethanol

We’ve had some strong response to the story we ran in the March issue regarding ethanol and outboards, entitle E=Exasperation... 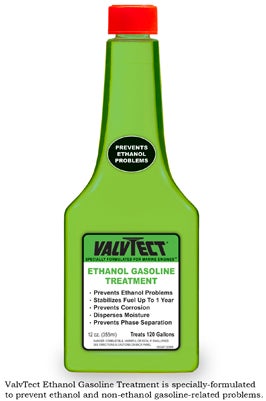 We’ve had some strong response to the story we ran in the March issue regarding ethanol and outboards, entitle E=Exasperation Squared. The headline could just have easily of run E=Expensive Squared. And I’m not just talking about out-of-pocket costs. The social and environmental costs are staggering.

Ethanol is a strong cleaning agent that attracts water. Leave it sit for a month, and the alcohol separates from the gasoline and drags water down to the bottom of the tank. Then your engine gets a vile shot of water, alcohol and dissolved gunk.

I had to replace the fuel line, have all the filters and screens changed three times, have the bad gas removed and the fuel tank scrubbed. The bills added up to more than $2000 dollars.

My wife, Ericka used to like the boat. But we’re about to start a family, and are guarding our pennies. To say that she was upset about the two grand is an understatement. It’s the first bad argument we’ve had about money, and now I sense she resents the boat. I can’t imagine how many other young guys with young families are going to lose weekends and have furious wives when they encounter the same issues as they take the boat out of storage this spring. The result will likely be a lot less interest in family level fishing across the nation.

Ethanol is usually made from corn, or from sugar. Demand for ethanol may solidify the political power of Big Sugar, which has been the primary culprit in destroying Florida’s Everglades, estuaries and coral reefs. And demand for ethanol poses many environmental threats across the nation.

For instance, my friend Doug Iverson who hails from Pierre, South Dakota, told me because of the demand for corn that ethanol has created, you could create a mile-wide swath from the southern border of South Dakota to the Canadian border with all the land that used to be enrolled in the Conservation Reserve Program (CRP). That region grows the vast majority of waterfowl in the country, and those states’ economies depend heavily on hunting tourism.

It’s a global problem. Take Brazil, where they’re logging millions of acres of rain forest to create space for sugar cultivation. The Amazon acts like the earth’s lungs. Trees of course turn carbon dioxide back into oxygen. To say that ethanol is a green alternative to fossil fuels and a way to combat climate change is absurd, and reckless as hell.

–Use Star Tron, by Star Brite, as a fuel stabilizer, or another stabilizer like VALVTECT’s new product.

–Dispose of stale gas properly and scrub your tank.

–Add the highest octane gas you can find.

–Get together with your local fishing club and/or conservation group, and send Congress a message demanding an end to this perverse and unsustainable subsidy. Some groups are even filing class-action lawsuits.