A couple weekends ago, spring burst into a riot down here in Florida. Bass and longbeards were on my mind.... 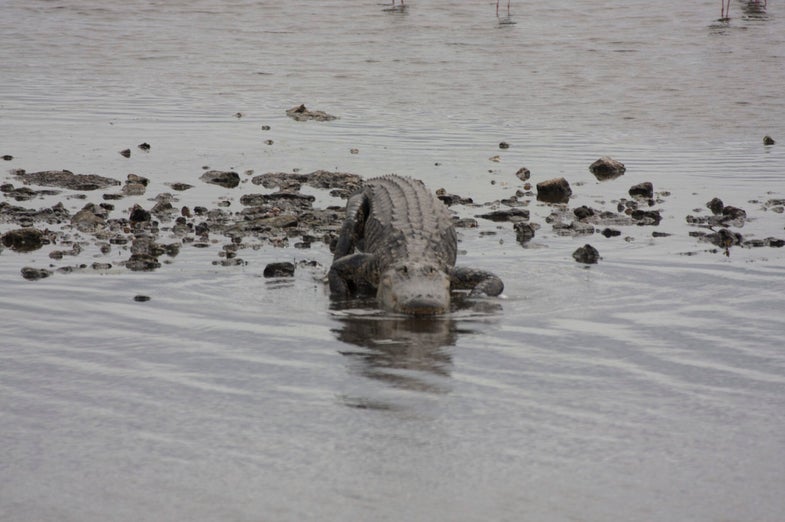 A couple weekends ago, spring burst into a riot down here in Florida. Bass and longbeards were on my mind. My dad had invited me turkey hunting, and I packed a 6 weight to fish the creek that runs through the property. The creek winds through a series of oxbows that fill up with spawning bass and speckled perch (crappie) this time of the year. Of course, the gators are piled into these holes and get more active as temperatures rise.

As I crashed through the thick cypress, I heard the gators thundering off the banks. Fortunately, they’re not too used to people, but considering that the creek is state land and you can’t carry a gun, I am extra careful. When I got down to the water’s edge, no less than 20 gators glimmered metallically on the surface. Not one of them was farther than a 100-yard swim and none were smaller than eight feet.

Roll casting a Wolly Booger onto several beds, I caught two small males and then pulled a 5-pound female out of the creek. I horsed the small fish in, so they didn’t get a chance to make much racket, but the big girl was too strong and thrashed like mad. I was releasing her when I noticed one of the bull gators accelerating in my direction from downwind. By the time I got the fly out, he was inches from the bank, about 40 yards out and pushing a two-foot wake. I turned and ran with the fly and leader trailing behind me. The fly snagged on a cypress branch and broke off but I never slowed my stride. Somewhere, the cypress grabbed the tip half of my venerable Sage Graphite II, a rod I’ve had since high school. I went back to look for it, without success. Bummer, but I guess I’m lucky that I’m not missing a limb.

This morning, I got a press release from the Florida Fish & Wildlife Conservation Commission advising folks that with spring upon us, gators are getting more active. They’ll get downright aggressive in a month or so as mating season begins. If you’re hunting or fishing in gator country this month and next, be careful. And by all means tell us about your gnarliest gator encounter.