On Friday morning, my wife, Ericka was driving over the Indian River Lagoon on her way to her office. She... 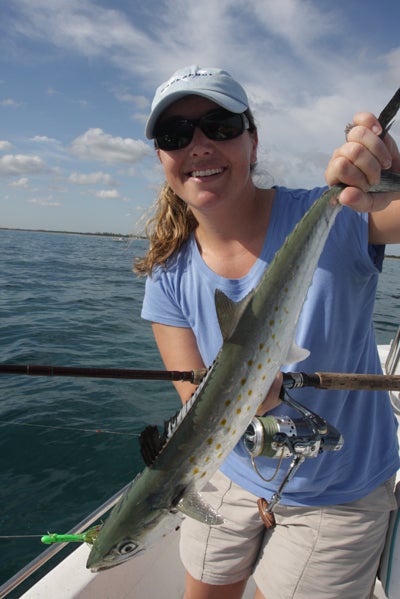 On Friday morning, my wife, Ericka was driving over the Indian River Lagoon on her way to her office. She called me and to say that river was glassy and that she could see bait “sizzling everywhere.” That’s the most detailed description of fishing conditions she’s ever given, and in the local vernacular to boot. She’s only been here three years, and it’s taken some adjustment. The Everglades and urban estuaries are a far cry from New England pastoral trout streams. They can also be a helluva lot harder to fish.

When she inquired about the forecast, all the reasons why I love my wife started welling up in my chest.

“Same as today, honey. Glass calm in the morning, southeast to 20 knots by noon.”

She really blew me away when she said, “Are the mackerel still there?”

Just south of the St. Lucie Inlet, a 7-mile line of reef rises from about 15 feet to five feet. It’s a long, coral-studded limestone ridge about a half-mile off the beach. The ridge creates a basin between it and the beach. Each winter an estimated 3 million pounds of Spanish mackerel pile in along the inside of the reef edge. If the surf is calm enough to get out there, the fishing is usually ridiculously easy. Toss a spoon, nylon jig or Clouser minnow out and hang on. It’s virtually guaranteed action, excitement and fish dinners.

Sometimes though, on warm, calm days when the water is very clear, the Spanish get finicky. It was almost 80 degrees when we left the ramp Saturday morning, and the water over the reef was so clear I could point out to Ericka the individual corals, sponges, anemones and tunicates. (She’s in the conservation business, and does a great deal of work to protect coral reefs, which I have studied and written about extensively.) It was like looking through a glass-bottom boat. Predictably, the fish weren’t biting, and I grew worried about Ericka’s attention span.

Then Ben Hartig, a legendary commercial fisherman and conservation advocate idled over and tossed his hook in a sandy spot next to the reef. He didn’t recognize me, so I called over to say hey. Ericka hooked up right then, and the drag screamed over my “Hey Ben!” Ben and I cast while we talked. Meanwhile, Ericka caught three mackerel, one of which was about 7 pounds, on a jig. I proceeded to lose to two fish on a 9 weight. When I dropped the second fish, Ben yelled over, “Good thing you brought her along, or you’d be in need of my services.”

I laughed and counted my blessings. The thing about living here that I love most isn’t just the great fishing; it’s the superb surrounding cast of knowledgeable, caring sea-going characters whom I’m lucky to have as friends, including my wife. Two days later, Ericka’s still telling everyone who calls the house that she out-fished me and I laugh. It reminds me that we have so many fishing friends. And it means that we have to have a rematch.