Northeast This week on Lake Ontario, the snow was melting, the ice was breaking up, and anglers were finally thawing... 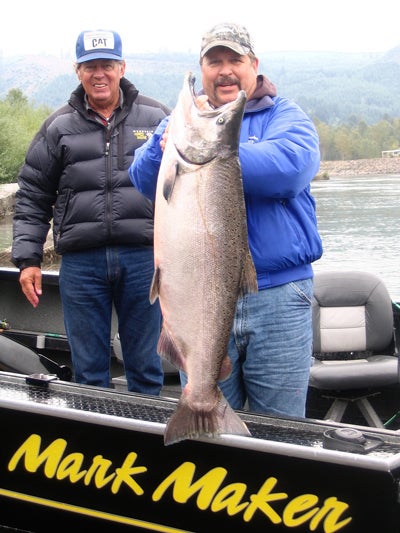 This week on Lake Ontario, the snow was melting, the ice was breaking up, and anglers were finally thawing out. Ted Jackson at Fishing World told us that the trout and salmon run is picking up from Hamilton to the Niagara River. “Niagara River will get hot in the spring, too,” he added. Ted told us that anglers are catching trout and salmon by casting Cleo spoons from the piers and lakeshore. While hard-core pier anglers will use 9 to 10 foot rods to cast their spoons as far as possible, Ted says that guys using a medium heavy 7-foot spinning outfit will catch their fair share of trout, too. Whether by boat or from the beach, he suggests anglers fish during an offshore wind when the water will be clear and calm.

As winter gives way to spring, largemouth bass are waking up in Kentucky’s biggest lakes. Jim Dicken at Fishing Guide Home Page told us that lakes from one end of the state to the other are producing some good action on big largemouths in Kentucky Lake, Cumberland and Barren Lake. “Barren is a sleeper lake,” Jim told us, explaining that few anglers are aware of the body’s healthy largemouth population. Early in the spring, Jim says that the fish will be in the shallow water responding to crankbaits and soft plastics that are dragged around fallen trees and over stumps. Anglers looking to catch striped bass should make a bee line to Cumberland Lake. Jim says that crews are catching big bass by slow trolling live baits along the Cumberland’s steep banks. He also told us that the Cumberland River has bee producing some big trout while sauger and walleye are being pulled from the water below the dam with Gulp! twister tails.

Following up a rumor of good fishing in Lake Okeechobee, we called Mike Crouse from Okeechobee Fishing Headquarters for confirmation. He told us that crappie fishing was gaining momentum, but the best bite has been between dusk and midnight. Anglers report that the fish are schooled up in 10 to 12 feet of water at the mouth of the Kissimmee River taking minnows or yellow and white jigs drifted across the bottom. Shellcrackers are in the shallows looking for red wigglers and crickets. Early in the morning is the best time to catch up with the lake’s largemouth bass. Mike says that the fish like topwater plugs for breakfast. He warns boaters to exercise caution when running the lake. “The water is down so you should stay outside the grass line,” he says. The shop is hosting a memorial tournament to benefit pancreatic cancer research Sunday, May 17. Register at OFHQ.

We caught up with Jeff Kirkwood while he was fishing on Lake Fork. “Fishing has to pick up before we can call it slow,” he joked. Jeff and his clients had fished from one end of the lake to the other by the time we called and had nothing but good times to show for it. “The bite is about to turn on,” he added to a duet of laughter from his two anglers. Jeff says that the lake is in great shape with plenty of fresh water, but the fish had yet to catch on. The crew was casting spinner baits, and Rat-L-traps in hopes of eliciting a reaction strike. As the fish move onto their beds, Jeff switches to a jig and bounces it across the beds of breeding largemouth. With the conditions improving, Jeff expects the action to pick up any day. “Any minute,” he added, to more laughs from his anglers.

Mark Maker at Mark’s Guide Service has been chasing the late-run steelhead on the Cowlitz River this week. “We’ve been side drifting, but some guys are pulling plugs,” Mark says. He explains that he’s been having the best luck drifting a No. 4 hook and corky with eggs on a 5 foot leader while other anglers are catching trout by slow trolling Brad’s Wigglers and smaller Quick Fish. “Metallic colors are looking real good,” Mark added. He said that he’s seen a few anglers who were back trolling divers with tune shrimp. To find the trout, Mark drifts the whole river looking for seams in the current where the fish will hide. Mark had reports of a good Chinook run on the Columbia River this week. He said that boats were catching fish between 20 and 25 pounds by trolling herring. “The catch should increase dramatically in the next couple weeks,” Mark said.