Northeast As winter gives way to spring, New England anglers are caught between ice fishing and open-water fishing. In the... 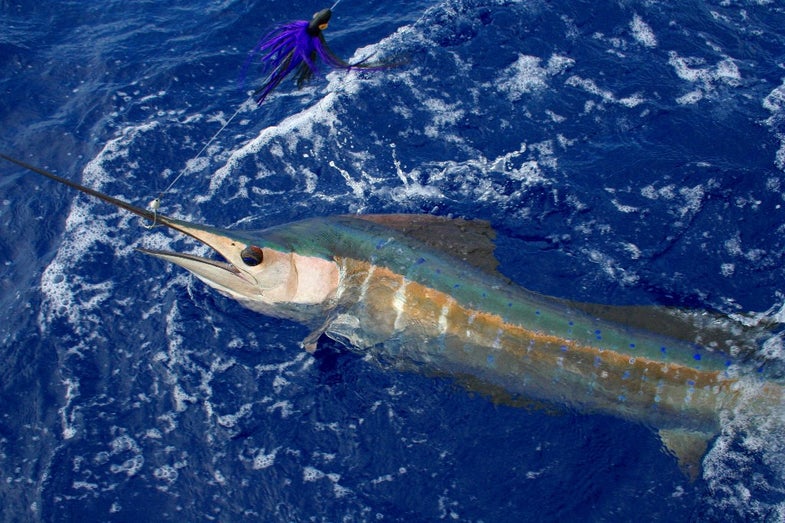 As winter gives way to spring, New England anglers are caught between ice fishing and open-water fishing. In the meantime, Captain Blain Anderson at Connecticut Outfitters reported that pike fishing is the best game in town. “The fish are starting to spawn and it should blow wide open in the next couple weeks,” he said. Blain told us that snow melt has pushed the fish into shallow creeks. Anglers who can access the extreme shallows are catching big pike on live shiners or small jerk baits. He suggests hooking the shiner on a No. 1 to 3/0 treble hook under a slip bobber. The secret to success: “Look for areas with current,” Blain says.

This week, Captain Ken Penrod dropped a fishing report on us via email. Penrod’s guides cover the water from the Upper Potomac to the Tidal Potomac and the Susquehanna. Largemouth bass fishing has been good on all three bodies of water. Ken says that the Upper Potomac has been hosting good numbers of smallmouth all winter and largemouth are joining the fun as water temperatures rise. He recommends using Mizmo tubes and Speed Trap crankbaits. The best action has been from Edwards Ferry to Dickerson around fallen trees and along the shoreline. Ken reports that the Susquehanna has crested and water levels are falling. Bass and walleye fishing have been great most of the winter. He tells us that a Mizmo tube or 4-inch Rapala jerkbait will fool largemouths, walleyes, and muskies. The best bass fishing has been on the tidal sections of the Potomac. To target largemouths, Ken suggests fishing around Mattawoman with crankbaits and tubes while Rattlin’ Rapalas will pull bass from the grass beds. The most productive beds have been on the Chickamuxen. Anglers fishing below the Woodrow Wilson Bridge are catching some huge blue catfish. Ken says that local guides Keith Barker and Danny Grulke have been hammering giant cats in the main channel.

Spring bass fishing heats up fast on Guntersville Lake in northeastern Alabama. According to Todd Trucks at Todd’s Tackle, the key to finding bass on the lake is finding green milfoil. “The fish are pre-spawn,” he says, “so they’re killing Rat-L-traps in 3 to 4 feet of water.” He says that the best colors have been crawfish imitations. Todd suggest launching at Guntersville State Park, Brown’s Creek Causeway, or Thompson River Restaurant. “Put the trolling motor on 80 and cover a lot of water,” he says. With water temperatures rising into the upper 50s, Todd says that the bass are trying to lock on to their beds. “After the sun has been on the water all day, it will be a touch bit warmer,” he adds. By the time the water hits 64, the fish will be on the beds. Todd has been fishing a lot recently and he’s confident about the bite. “You’re gonna get some fish caught on Guntersville,” he says.

Alert the troops and notify the press, it’s spoonbilling time on the Osage River. Tammy Turner at 40 Woods reports that the spoonbill season opens on Sunday. “It’s a good way to kick off the fishing season,” she said. Tammy explained that anglers slow troll 14/0 treble hooks and big sinkers with heavy tackle to snag these fish, which can top 100 pounds. “The biggest one I’ve seen was 120 pounds,” she says. The season will run from March 15 until the end of April and an angler can keep two fish each day. Tammy said that crappie fishing is also good on the local lakes. She said that most of the fish are coming on small to medium minnows, but a few fish have been caught on Slab Buster jigs. “Pearl and chartreuse are selling the fastest,” she said.

Anglers fishing out of Santa Maria, California have a tough choice to make: fish fresh water or fish saltwater. Fortunately, either decision will result in good fishing. Eric Mathiesen at Been There, Caught That reported that bass and trout are easy targets in Lopez Lake. He looks for largemouth in the weeded areas with swim baits. Trout are hanging in 30 to 50 feet of water, but Eric says that the fish will move shallower as the water gets warmer. Anglers are trolling roostertails, Panther Martins, and Swedish Pimples from downriggers. “Where selling a lot of Apex lures,” Eric adds. On the freshwater scene, Eric says that rockcod season opened on March 1st south of Point Arguello off Santa Barbara. “Not much to report, yet,” he admits, but adds that as more anglers get on the water, more fish will be brought back to the dock. Eric suggests looking for the fish on rocky beds in 50 to 60 feet of water with swimbaits and Berkley Gulp! “To get their attention, tip the lure with a little piece of squid,” he suggests.