New England The first day of spring was last week and, for many anglers across the country, that means the... 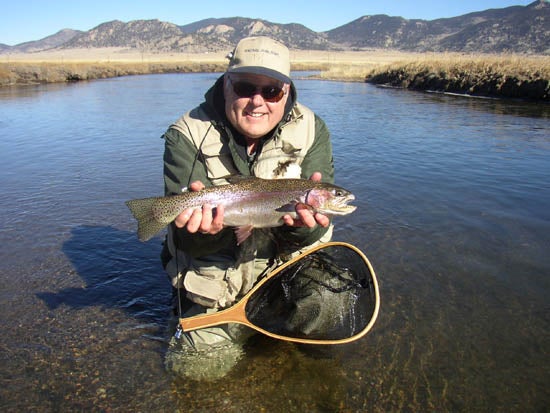 The first day of spring was last week and, for many anglers across the country, that means the first day of trout season. From New England to New Mexico and Washington state to Washington D.C., anglers young and old are taking to the creeks, rivers, and ponds in search of rainbows, brooks, browns. Anglers on Cape Cod covet trout fishing for filling in the down time between ice fishing and open water fishing. Jim Young at Eastman Sports says that local anglers are taking advantage of the extensive trout stocking program in the nearby lakes and streams. “They’re full of 10 to 14-inch rainbows,” he says. Jim tells us that the hot bait is a night crawler that has been injected with air so that it will float. The inflated worm is threaded on a small hook and short leader with a tiny split shot. Jim adds that Peter’s Pond has been laced with 250 salmon. Anglers are using shiners or trolling plugs to fool these fish. Jim points out that these stocked trout make an easy target and tasty dinner for families looking to go fishing.

“Flounder are jumping in the boat,” reported Randy Lewes at Captain Zed’s Bait and Tackle in Wachapreague, Virginia. While he admits fishing hasn’t gotten that good, yet, he says that anglers kicked off the flat fish season with some impressive stringers of flounder this week. Most of the action has been centered around Bullshead Channel at daymarker 132 on an outgoing tide. “Green Channel and The Hummock have also been good on the outgoing tide,” he says. The best bait has been a minnow/squid sandwich fished on a chartreuse or pink flounder rig. Everyone is anxious for the Wachapreague Flounder tournament which runs from April 17 to the 26. Flounder fishing has also started to heat up in Chesapeake Bay. Dan at Ocean’s East II in Virginia Beach reported fish from the ODU Reef Site off Ocean View to the 7 and 8 mile markers at the Chesapeake Bay Bridge Tunnel. The fish are falling for squid strips or cut bait drifted along the bottom on a flounder rig

Spring comes early to the southern Appalachian Mountains. The trees are budding, the flowers are blooming, and trout are biting. John Martyn at Martyn’s Sea and Stream reported that the streams and rivers around Durham are filling up with trout and trout fishermen. Currently, the “delayed harvest” streams are producing steady catch-and-release action for rainbow trout. Anglers fishing these streams are required to use artificial lures and a single hook and will not be able to keep any of these fish until early summer. Next week the stocked trout streams will be open to hungry anglers looking to catch some fish and bring home some dinner. Jim says that the best fly patterns have been a bluewing olive, wooly bugger, or nymph. While the fishing heats up around Durham, some of the best early season action is on the Roanoke River for hickory shad and striped bass. “The shad are there now,” John says, “and the striper will follow.” For the shad, John recommends using a 5 to 6 wt. rod, 250-grain sinking line and any brightly colored fly that imitates a shad dart. When the striper show up, John tells anglers to switch up to a 8 wt. rod with 350 grain line and large Clousers and deceivers. On the saltwater side of the state, John says that puppy drum fishing is firing up in Wilmington, but other areas have been slow to kick off the skinny water season. “Fishing should be better right now, but the fish are still cold,” he explains.

The trout bug has even hit the center of the country. Anglers in Tulsa, Oklahoma have come down with trout fever and are heading to the tailwaters of the Illinois River for relief. Butch at D&B Outfitters reported excellent conditions for trout fishing. “The water is low and they’ve stocked lots of fish,” he says. He adds that there is plenty of public parking along the river and each access spot offers good fishing. The three dominate flies are the zebra midge, San Juan worm, and hare’s ear. Butch recommends using a 3 to 5 wt. rod with weight forward floating line. He says that the fish are hanging in holes and around structure on the river. “The biggest concentration will be at the head of the holes where there is the most current,” he adds. Closer to home, Butch had good reports of good striper fishing on the Arkansas River right in Tulsa. Fly flingers using an 8 wt. rod with large streamers in shad patters and Clousers are scoring some impressive linesiders. “River Park below Zinc Lake has been the most popular place,” he says.

Although the first day of spring was last week, no one notified the weatherman in Denver, Colorado. “We’re in the middle of a blizzard,” reported Marshall Estes when we called Fly Fishing Colorado www.fly-fishing-colorado.com. Before the snow started falling, the fish were biting. “We had several days of 60 degree weather and everyone was fishing,” he says. Marshall ran up to the South Platte River by Deckers to check out the action. “Everyone seemed to be catching,” he reported. Marshall says that the hot pattern was a No. 22 midge under a No. 20 parachute Adams, but one angler was catching on a RS2. “The inventor of the fly, Rim Chung, was fishing the river,” Marshall says, “it’s a great fly the way he ties it.” Marshalls favorite local creek was still sleeping. “We need more snow on Mt. Evans, before Bear Creek comes to life” he said. Marshall had good news about Dream Stream between Spinning Mountain and 11 Mile Reservoir. “Very big fish are coming out of there,” he said. Anglers are catching trophy rainbows with midge nymphs. The whole river is open to the public with plenty of parking and easy access. Marshall’s weather forecast was, “Officially spring is here, but we have another week before fishing really picks up.”