Northeast Fans of the NCAA’s Final Four are in for some good basketball and great fishing this week. After the... 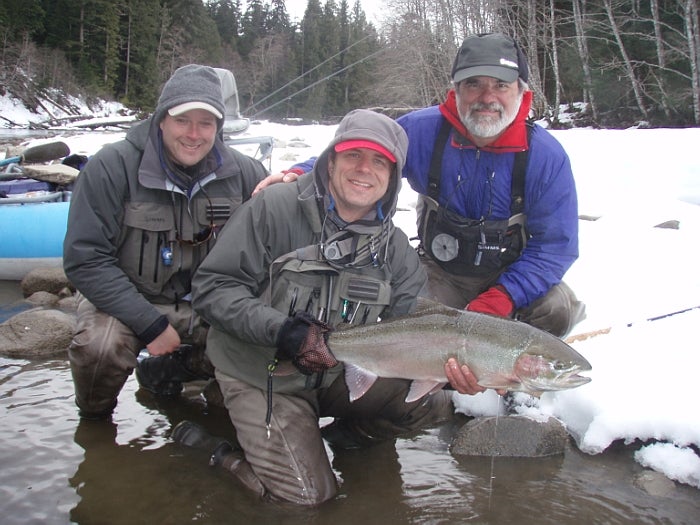 Fans of the NCAA’s Final Four are in for some good basketball and great fishing this week. After the game, UCONN anglers will want to head to the Connecticut River and fish for monster pike. Trevor Burwick at Connecticut Outfitters www.ct-outfitters.com told us that early spring pike fishing is heating up in the shallow coves and marinas. “Guys are fishing with big shiners or big soft plastics,” Trevor said. He recommends rigging a 7- to 12-inch Houdini shad on a 7/0 to 9/0 hook with no weight. “The pike are getting into spawning mode,” he told us. Trevor expects big striped bass to show up soon. “We’re already catching schoolies in the coves, discharges, and main river,” he said. Anglers are fishing sand worms on a fishfinder rig with a 2/0 to 3/0 hook. When the bigger fish move in, Trevor recommends anglers add chunks of menhaden to their bait menu and increase the size of the hook on their fishfinder to 5/0 to 8/0 hook. Trevor was hopeful about the spring fishing season. “This warm weather should get the fish biting,” he said.

For Philly anglers, the only thing better than watching Villanova win the NCAA Championship would be hooking into a monster striper on the Susquehanna Flats. Herb Benjamin at Herb’s Bait and Tackle http://home.comcast.net/~HerbsTackleShop/index.htm/ in North East, Maryland reported that anglers are catching big rockfish on the flats with both live bait and lures. While striper season won’t open until May 16, anglers can still catch and release big striper on the flats. Herb recommends launching a boat at Anchor Marina and fish the drift the flats while casting Bass Assassins, Tony Acetta spoons, or RattLtraps. The striper will also hit bloodworms on a top bottom rig or a strip of herring on a Carolina rig. “You have to use a non-offset circle hook,” Herb reminds anglers. He added that largemouth bass fishing has also been awesome. “This area is the third best bass fishing destination on the East Coast,” Herb bragged. He said that anglers are fishing the flats on the North East, Sassafras, and Susquehanna Rivers with a variety of jigs, plugs, and soft plastics. Guys looking to celebrate the big game with a fish fry should head to Turkey Point and load up on big white perch. No matter how the game turns out, the food will definitely be good.

North Carolina’s waters will be uncrowded on Saturday while every Tarheel in the state is glued to a television, radio, or computer watching UNC in the Final Four. Ken Merwitzer at Carolina Outdoor Sportsman www.carolinaoutdoorsportsman.com told us that Falls Lake has been a hot spot for largemouth bass up to 9 pounds. “We’ve been selling a lot of live minnows and Bagley Balsawood Baits,” he said. The best starting point has been Bluejay Park. Ken added that shad fishing has been hot for guys fishing Nungesser shad darts from any of the public access areas along Roanoke Rapids. On the coast, saltwater fishing his picking up. Ken said that anglers are starting to catch red drum in the shallows and along the beaches while tuna are getting most of the attention offshore. We called Captain Scott Warren on Big Tahuna for the latest offshore information. Scott told us that bluefin tuna are still thick on the 400 and 500 lines while yellowfin showed up off the rockpile this week. He said that his crew had the fish rolling and busting all around the boat on Wednesday. Scott added that blackfin tuna are still holding over the wrecks and rockpiles while the bottom is covered with blueline tilefish. “Fishing is good and getting better,” he told us.

Anglers around the Motor City are revved up about fishing and basketball this week. Not only is Michigan in the Final Four, but the tournament is being held in Detroit at the hight of the walleye bite. Bill Dougherty at Bottomline Bait and Tackle http://bottomlinetackle.tripod.com/ reported excellent walleye action on the lower Detroit River. Bill said that the best fishing has been in Trenton Channel with a jig and minnow or trolling a Rapala plug on a handline. He added that yellowperch fishing is good on the Canada side of the river’s mouth. Bill suggests fishing a shiner on a perch rig along the edges of the shipping channel and around any rockpiles. “I had some yellowperch for dinner last night,” he bragged. Big pike are holding in the back bays and shallows. “They’re feeding heavily before they spawn,” Bill told us. He suggest fishing a live sucker under a bobber to score pike over 34 inches. Anglers looking to fish off the bank should head to Lake Erie Metro Park with a mess of waxworms and small jigs. Before hanging up the phone, Bill added that steelhead are still running in the Huron River. Bill says the best place to find the steelies is along Point Moulliee State Park. “Fishing is free in the park for anyone with a Michigan fishing license,” he adds.

So, where will the NCAA Champions go after winning the big game? Disney World, of course. Players looking to take a break from roller coasters and theme shows, should head to Seal Beach with a cooler and a couple fishing rods. Robert Douglas at Big Fish www.bigfishtackle.com in Anaheim told us that the pier has been putting up jack smelt, mackerel, and a few halibut. He said that the pan fish will fall for a sliced anchovy on a two hook bottomrig or Carolina rig. Halibut are looking for a bigger meal. Robert suggests catching live anchovies and sardines with a sabiki rig then turning them into halibut bait on single dropper loop. Surf fishing is also good. Robert points anglers to Huntington Beach and Seal Beach for barred surf perch, corbina and halibut. Robert is really looking forward to the arrival of grunion to the coast. The invasion of these small fish brings larger preditors to the beach. “Hopefully the striper will come back, too,” he says.