It’s hard to look for Quint when your fishing buddy is pale white and on the verge of puking his... 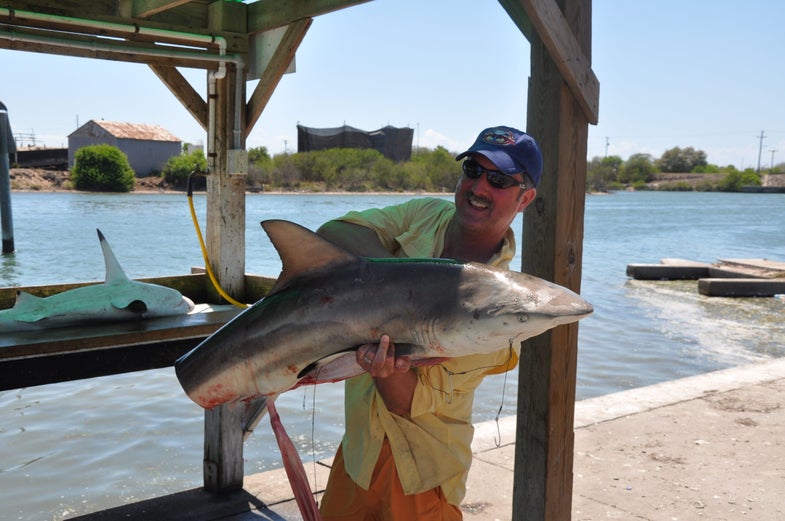 It’s hard to look for Quint when your fishing buddy is pale white and on the verge of puking his guts out over the side of the boat. I mean, who could concentrate on finding someone reminiscent of a movie character with a show like that on the verge of…exploding?

It was my third shark fishing trip with good friend Champe. The first time we had gone out in search for Quint we found ourselves on the beach with a foul-mouthed racist sea turtle activist. The second time we went searching we found a captain whose blood contained at least 10% real fruit juice and 80% pure cane sugar. The remaining percent was hemoglobin or plasma or something – hell, I don’t know. I’m not a doctor. For our third trip Champe and I decided to forgo our hunt for Quint and instead return to our second captain, Mr. Sugar Daddy.

As was our tradition, Champe and I spent the night before our trip hold up in our motel room drinking beer, scarfing burning phosphorus hot chicken wings, and watching QVC (Champe’s all about bargains). Thirty downed wings and way too many beers later, we retired to dreams of big sharks.

The next day we met our captain at a dock on the bay. But rather than cruise the bay in search of shark, Captain Nutrasweet takes us straight out into the open sea. He does this without telling us of his plan in advance, so neither Champe nor I had the opportunity to prepare or obtain anti-nausea medications. This lack of information was worse for Champe as he had never been in open water.

The minute we passed the jetty breaks our tiny bay boat started to bob on open ocean swells. By the time we had made it three miles from shore dehydration, a scorching Texas sun, and too much indulgence was mixing with Champe’s equilibrium at a savage pace. His balance only got worse as bait was set, lines thrown over, and chum grinded into the water. When the first line screeched off the reel Champe was in position to yak. But our captain didn’t give him the chance. He thrust the howling set-up into Champe’s hands and started barking. For more than twenty minutes all Champe heard was, “Set the hook! Don’t stop pulling! Reel ’em in faster! Don’t you die on me! Come on, let’s go!”

When the top section of the rod snapped off the captain really started yelling, “He’s almost to the boat! Come on! Don’t you let him get away Champe! Get ’em closer! Closer! Closer!”

The second the captain got the gaffed bull shark into the boat, Champe dropped his rod, hit the cooler for a beer and dropped into the fetal position for the rest of our time aboard. When I later asked him how he avoided puking he responded, “Dude I was too sick to puke.”