Gayne And The Suckers 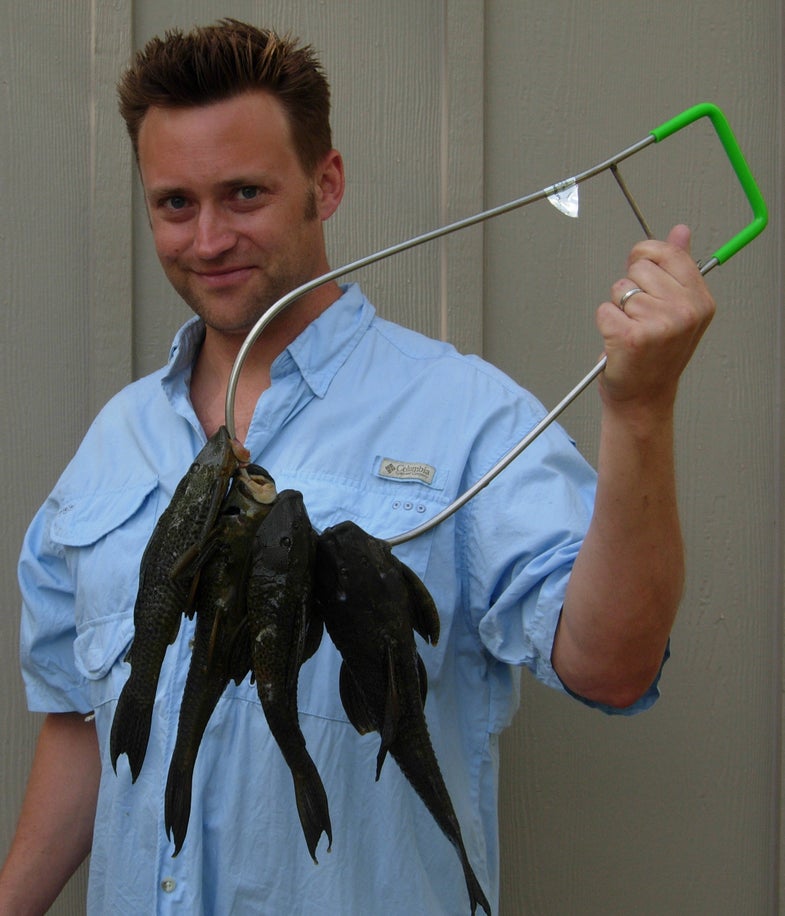 Hypostomus plecostomus otherwise known as sucker fish or armored catfish are those spiny black, bottom sucking, algae eaters found in freshwater aquariums around the world. Originally from South America these nasty exotics have made their way into Texas (and the rest of the South) rivers and creeks through intentional and accidental release. Where found they are an ecological nightmare.

Capable of reaching upwards of three feet in length, plecostomus are covered with thick body armor as well as a plethora of spike-like spines along and within the fins. They destroy natural habitat by sucking up algae – that some indigenous species feed on -fish eggs and larvae. They also burrow into river banks causing unstable ground and the release of sediments into the water. Because nothing in the United States will eat them, it’s up to man to try and control them (hell, it was man that put them there in the first place). Problem is that sucker fish don’t respond to anything an angler might throw at them, they’re generally too deep to shock, and traps and nets have proved to be a waste of time. The only way to really make a dent in the population is to take them on one at a time, mano on fish-o.

As I’ve been spearfishing for almost twenty years the idea of diving into a river to hunt fish wasn’t new to me. Going after sucker fish however was. Luckily I was guided by plecostomus hunter extraordinaire Rodney Wade who has popped more than his share of the nasty imports.

We met up at the San Marcos river near (oddly enough) San Marcos, Texas. Spring fed and generally gin clear this river maintains a constant temperature of around 72 degrees making it perfect for tropical invaders such as plecostomus. It’s also home to number of other invasive species such as koi, goldfish, and betas. The plan was to float the river in-between low water crossings, hunting as we went. Signs of the damage done by these exotics were apparent from my first dive. Entire beds of grass and wild rice lay in waste, logs that once harbored shelter and food for smaller fish were striped of algae and other growth, and in some areas the banks looked more like a colander. After less than ten minutes in the water I had popped my first sucker, a real beaut roughly ten inches in length and black as pitch. Within an hour I had collected six suckers while Rodney had taken a good-sized goldfish.

Taking a break from the water to warm up and have a snack I did some quick calculating. At six fish and hour it would only take me about sixteen thousand hours to rid Texas of the estimated 100,000 plecostomus inhabiting state waters. That’s roughly 694 days.

Guess I better get busy.