Woodrow Wilson and the Giant Sturgeon 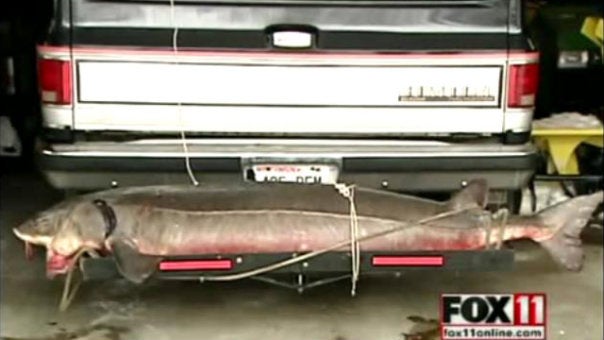 According to WAOW TV 9, Wittenberg, Wisconsin resident Angelo Firkus speared a 131-pound, 72 1/4 inch sturgeon on Lake Winnebago in Eastern Wisconsin this past Saturday, February 13, 2010. Of the event Firkus said, “I can’t believe I got it. It’s a fish of a lifetime.” For Firkus’ fish a lifetime was extremely long as Wisconsin Department of Natural Resources experts estimated the fish’s age at “about 100 years.” So what were the major events of Firkus’ sturgeon’s life?

1910 – Woodrow Wilson is president, the Boy Scouts of America is founded, and Firky (as Firkus’ sturgeon’s real name is unpronounceable in the human tongue he will be referred to as Firky henceforth) the sturgeon escapes his egg sack. Unfortunately, not all of his 2 million brothers and sisters follow suit.

1920 – The New York Yankees purchase Babe Ruth from the Red Sox for $125,000 and Firky starts to feel “a little different.” After listening to the After School Radio Special Timmy’s Body’s Changing Firky realizes he is in the throes of puberty.

1925 – Mussolini becomes dictator and Firky fertilizes his first batch of eggs. He is later taken on the Maury Show where he defends his total lack of parenting by stating, “Man lots of fish fertilized that fish’s eggs. Heck, my homeboy Tee did twice. Those fry ain’t mine!”

1930 – Synthetic rubber is first produced and Firky fertilizes his 2 billionth egg. He celebrates by getting t-shirt made that reads “Over 2 Billion Serviced!” and cruising bars with friends looking for more eggs to fertilize.

1969 – Neil Armstrong walks on the moon and Firky is nearly speared by “some long-haired stinky hippie!”

1975 – Jimmy Hoffa goes missing. Firky wonders about the man in “cement shoes” at the bottom of his lake home.

2008 – Barack Obama is elected president. Firky finds he no longer enjoys the things he used to. He does however sign away all his assets to his Guatemalan maid, starts watching The Golden Girls, and begins eating dinner at 3:45 in the afternoon.

2010 – Firky feels stabbing pain in back, sees a bright white light containing all his deceased friends. They call for him to come toward the light.