BP finally gave up attempts to stem the flow of the Deepwater Horizon oil spill with the so-called top kill,... 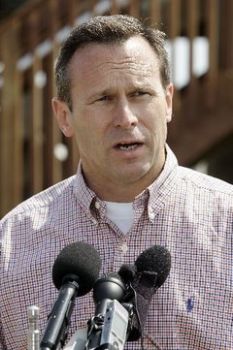 BP finally gave up attempts to stem the flow of the Deepwater Horizon oil spill with the so-called top kill, and the company’s spokesman said in a press conference there is no guarantee the next step will work.

“After three full days of attempting top kill, we have been unable to overcome the flow from the well, so we think it’s time to move on to the next of the options …,” BP’s Doug Suttle said.

The top-kill operation included injecting 30,000 barrels of mud and the “junk shot” of tires and other material into the inoperable blowout preventer, Suttles said.

The next step is to cut and remove the existing riser from the top of the “lower marine riser package,” followed by installation of a cap that will be connected to a new riser and from there to a drillship via new drill pipe, he said.

However, it is unclear how successful this next step will be.

“We are confident the (LMRP) job will work, but obviously we cannot guarantee success at this time.”

Suttles said it will take about four days to complete the LMRP project, but U.S. Coast Guard Rear Admiral Mary Landry cautioned it could take longer and said it was important to “manage expectations.”

“When he said four days, I said, ‘Don’t even say four. Say four to seven,’ because, let’s be honest, we may have some slowdowns and I would rather under-promise and over deliver than over-promise and under-deliver,” Landry said.

Work on two relief wells continues, and Suttles said the first of those wells is actually ahead of schedule. However, he admitted that the most realistic estimate for completion is August.

Landry said her agency is “very disappointed” with the failure of the top kill, but she immediately praised what she said was the successes of the response thus far.

“It is a tribute to everyone who has been working on this from day 1 that we only have 107 miles of shoreline oiled right now, and we have approximately 30 acres of (oiled) marsh,” she said. “When you think about the volume (of oil) that’s been spilled already and you look at how much has reached the shore, we really have done a tremendous amount of good work in fighting this as far offshore as possible.”

“I’m very pleased to say the amount of oil on the surface of the sea continues to be reduced,” he said, referencing his observations from a recent flyover of the western portion of the work area. “This is a credit to the men and women who are fighting this offshore and the amount of equipment and resources we are all deploying in that activity.”

Both Suttles and Landry admitted that the subsurface use of the dispersant Corexit has prevented much oil from surfacing, and they both seemed pleased that oil was not surfacing.

“Obviously the subsurface injection of dispersant has been very successful,” Landry said.

Suttles indicated this was a good thing, pointing out that Corexit breaks oil into “microscopic droplets” that microbes within the water column can break down naturally.

“No, we won’t be able to clean up dispersed oil because the process (of dispersal) itself will actually accelerate the natural degradation that takes place,” he said.

Landry did acknowledge concerns about toxicity of the dispersed oil and Corexit, and promised monitoring.

“I want to assure you (the National Oceanographic and Atmospheric Administration) have brought in enormous resources to do ocean sampling, ocean monitoring and will be transparent with all that information,” she said.

She also said that seafood sampling is ramping up, as is Environmental Protection Agency air and water monitoring.

Suttles added that BP’s sampling has revealed no contamination related to Corexit.