SPECIAL REPORT: After nearly a month of spewing into the Gulf of Mexico, heavy black oil has entered the Louisiana... 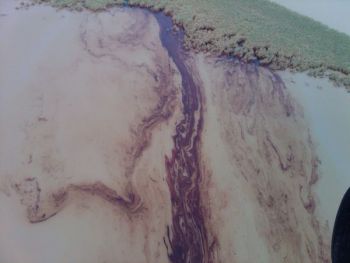 SPECIAL REPORT: After nearly a month of spewing into the Gulf of Mexico, heavy black oil has entered the Louisiana wetlands, Gov. Bobby Jindal told a group of reporters in Venice today.

“The day we’ve been fearing is upon us today,” Jindal said after touring North Pass, Northeast Pass and Pass a Loutre, and finding blankets of thick oil in the marsh.

“This is not weathered, emulsified oil,” Jindal said. “This is heavy oil stranded inside the wetlands. This oil will be very difficult for (BP) to clean up.”

Jindal said state biologists have told him the vegetation in these oiled areas will begin to die in five to seven days.

“You can already see browning of the tips (of the vegetation),” he said. “The tides have come and gone, and they’re not taking the oil with them.”

Jindal, who was flanked by Louisiana Department of Wildlife and Fisheries Secretary Robert Barham and Plaquemines Parish President Billy Nungesser, used the opportunity to strenuously urge the U.S. Army Corps of Engineers to approve a state proposal to fill in gaps in Louisiana’s barrier islands.

It is estimated the plan will cost hundreds of millions of dollars.

“The time to act is now,” Jindal said. “I’ve already asked the Coast Guard to preposition the dredges.”

Nungesser said the oiling of the marshes in lower Plaquemines could have been avoided.

“If we don’t issue these permits and start pumping this sand, shame on us,” he said. “Had we issued the permits two weeks ago, this oil might not have been here.

“We’ve got to demand that this permit gets issued.”

Without approval of the permits, Jindal said the oiling will only get worse.

“There are going to be waves of oil coming into the wetlands,” he said. “We need to stop this cancer from spreading.

So far, nearly 35 miles of shoreline have been impacted by the oil, Jindal said.

The Deepwater Horizon disaster has the potential to reverse progress Louisiana has been making in its fight against coastal erosion and subsidence, according to Jindal. The governor said the state has spent $800 million the last three years on coastal-restoration projects, and was starting to see that money pay dividends.

“This year would have been the lowest rate of land loss in 80 years,” he said. “This oil has the potential to reverse our progress.”

Nungesser’s certain it will – if the corps fails to approve the barrier-island permit.

“Everything that blanket of oil covered will die,” he said.

For more coverage of the Deepwater Horizon oil spill go to: Louisiana Sportsman