According Joe Macaluso of The Advocate: The Louisiana Department of Wildlife and Fisheries announced at 8 p.m. Saturday the most... 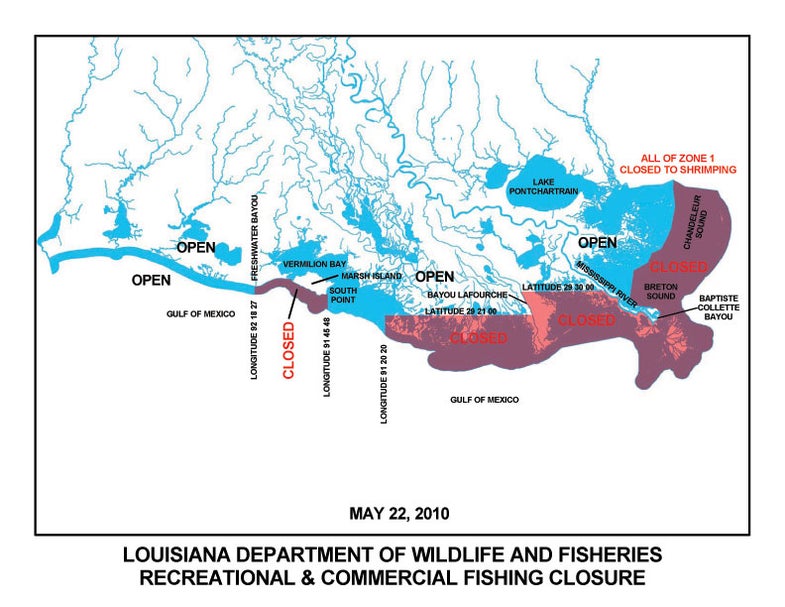 According Joe Macaluso of The Advocate: The Louisiana Department of Wildlife and Fisheries announced at 8 p.m. Saturday the most far-reaching closure of state coastal waters in the more than four weeks since British Petroleum’s Deepwater Horizon rig began gushing oil into the Gulf of Mexico off Louisiana’s coast.

All the newly closed waters are “inside” waters and include closures of most of Barataria Bay, all of Caminada Bay north of Grand Isle, and most, if not all, of Terrebonne and Timbalier bays.

The closure order effectively shut down all fishing in the Grand Isle, Grand Terre, Four Bayous Pass, Red’s Pass, Lakes Pelto and Barre and all points in the Cocodrie area.

Effective immediately, all waters west of the Mississippi River to the western shoreline of Bayou Lafourche south of 29 degrees 30 minutes north latitude were closed to commercial and recreational fishing activities.

“Precautionary closures of recreational and commercial fishing have been implemented based on the best information the secretary of the department (Wildlife and Fisheries) receives from field biologists, staff and trajectory models from NOAA (National Oceanographic and Atmospheric Administration,” the release says.

“Once reports of oil are received, LDWF initiates a field survey and immediate seafood testing on the suspected areas,” the release states.

“Closures are subsequently made with the intent to be as safe as possible, while not closing any fishing areas unnecessarily,” the release says. “As test results come back clearing the area, affected waters are then reopened.”