The U.S. Coast Guard has reported that tar balls likely from the explosion of the Deepwater Horizon oil rig have... 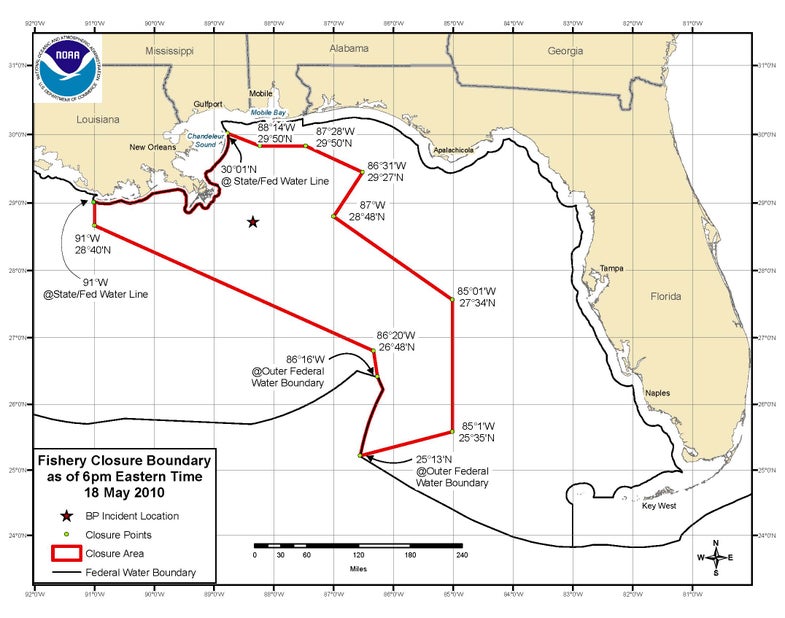 The U.S. Coast Guard has reported that tar balls likely from the explosion of the Deepwater Horizon oil rig have begun to show up near Key West, Florida. Further, nearly 46,000 square miles of federal waters have been closed to fishing.

It is likely that oil from the Deepwater Horizon spill has very likely already entered the Gulf of Mexico’s Loop Current, according to National Oceanic and Atmospheric Administration Administrator Jane Lubchenco.

Lubchenco said a team of NOAA scientists has identified a tendril of oil that has moved south from the site of the spill, and appears to be interacting with the Loop Current.

“Oil is increasingly likely to become entrained in the Loop Current, if it’s not already,” she said.

Once it gets in the Loop Current, it would take eight to 10 days to impact the Florida Keys, Lubchenco said, adding that the flow of the current is much more likely to take the oil through the Florida Straits rather than into the west coast of the Florida Peninsula.

Still, Lubchenco doesn’t think the oil will pose a significant risk for the wildlife or sensitive coral reefs in the area of the Keys.

“Evaporation and dispersion would reduce the oil volume significantly,” she said. “The oil would be very dilute and highly weathered.”

What would arrive in the Keys would be mostly tar balls, Lubchenco said, adding that tar balls have already been found on Key West beaches. Those tar balls are currently en route to a Coast Guard lab in Connecticut to determine if they are affiliated with the BP Deepwater Horizon spill, Lubchenco said.

“It is safe to say that the tar balls that have already been found are an example of what might happen if oil from the spill becomes entrained in the Loop Current,” Lubchenco said. “This is a time for awareness and preparation but not overreaction.”

As a precaution, however, Lubchenco ordered the closure of additional offshore areas to fishing, effective at 5 p.m., CDT, May 18. The closure area now covers 45,728 square miles, or 19 percent of all Gulf of Mexico federal waters.–www.Louisianasportsman.com